A Tale of Two Terror Attacks and The New York Times 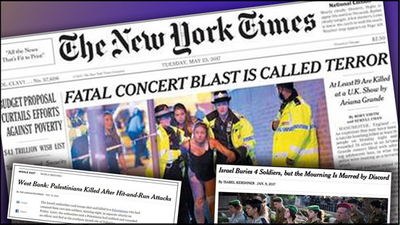 Last month's suicide bombing at an Ariana Grande concert in Manchester wasn't the first time an Islamist terrorist targeted young people out for a night of fun. In 2001, a Hamas-affiliated terrorist blew himself up outside the Dolphinarium, a Tel Aviv nightclub, killing 21 Israelis, including 16 teenagers.

But news coverage of the two massacres was strikingly different, as the Manchester attack generated exponentially more attention. The New York Times, for example, offered a handful of small accounts about the Tel Aviv attack. But the Manchester bombing generated dozens of wire service and Times staff updates along with analysis stories and an editorial lamenting the horror of targeting children.

There are reasons why attacks in Europe are covered more exhaustively than those targeting Israelis. But as a result, Americans may not fully appreciate the depth of Palestinian violence because the near-daily examples of it are all but ignored.

The stark reporting contrast between the Manchester and Dolphinarium attacks reveals a change in how terrorism has been covered during the intervening 16 years. The Dolphinarium attack took place about three months before the September 11th attacks that dramatically increased media attention to terrorism.

A significant reporting gap continued after 9/11, however. Two 2002 shooting attacks within 12 days of each other prompted vastly different coverage by the New York Times. The July 4 shooting attack at Los Angeles International Airport, which claimed two lives, produced at least 13 articles. By contrast, nine people were murdered in a July 16 shooting and bombing attack against an Israeli bus going to the settlement of Immanuel. The Times devoted only one article to this slaughter.

Worse, the newspaper ran a 243-word Associated Press article about the attack with a headline emphasizing the terrorists' deaths, rather than their victim: "Palestinian Attackers Killed After Killing Israeli Officer."

By contrast, the Times provided much more sympathetic coverage to an April terrorist attack in Paris that similarly claimed a police officer's life. At 1,037 words, the article was almost three times as long, contained six photos of the attack scene, and referred six times to "terrorism" and thrice to "terrorist attack."

An attack's location plays a significant role in determining the extent of news coverage. Commentator Joe Concha calls this the "there versus here" phenomenon.

For example, the Times published eight articles about last November's car ramming and stabbing attack at Ohio State University that killed no one, but injured 11 people. That included a profile of the suspected terrorist behind it. Deadlier attacks overseas generally receive far less coverage.

However, that "there versus here" explanation falters when comparing vehicular attacks in Israel with similar attacks in other non-US countries since Ohio State.

By contrast, January's truck attack in Jerusalem that killed four people generated just three articles and a mention in a daily news digest.

One reason European attacks receive more attention is that they raise new concerns about safety throughout the West, as the Islamic State pursues a campaign to hit soft targets wherever it can.

Another explanation may be that so many terrorist attacks in Israel have occurred over the last few decades that the Times has grown desensitized to them, no longer considering them as newsworthy.

Egyptian Copts, who have also suffered from Islamist terror for decades, may fall into the same unfortunate category. The attack last month in Minya, in which gunmen opened fire on Christian pilgrims, massacring 29, generated only four Times articles.

When the news media under-report terrorist attacks in places where they occur routinely, they do an injustice to victims in need of sympathy, while helping terrorists to defer the day that international leaders unite against them. 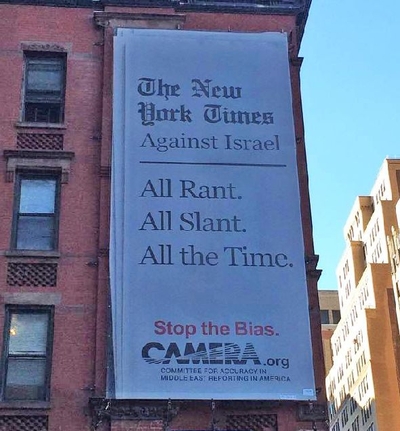 CAMERA, a nonprofit media watchdog, has compiled an extensive record of chronic anti-Israel coverage and commentary by the Times, and has launched billboard campaigns to expose the bias.

While some might point to the newspaper's April decision to hire pro-Israel columnist Bret Stephens as a sign of growing balance on the issue, subsequent coverage led veteran Times critic Ira Stoll to argue that the move just gave the paper cover to intensify its anti-Israel slant. Stoll lists five Times op-eds, each of which "taken alone, would be totally outrageous and indefensible. The onslaught of all five of them, in six weeks, constitutes an outbreak of anti-Israel and anti-Jewish hostility at the Times."

The Dolphinarium attack, one of Israel's deadliest suicide bombings, marked its 16th anniversary on June 1. While it's too late for the Times to give due coverage to the 16 teens and five adults who were slaughtered, the paper conceded the parallels between their fate and that of the Manchester victims, by running this op-ed by a survivor of the Dolphinarium massacre expressing empathy for those affected by the Ariana Grande attack.

However, when the Times published its May 23 editorial on the Manchester attack, it failed to mention the Dolphinarium attack, and thereby omitted the suicide bombing most similar to the Manchester attack in its targeting of children. The editorial duly notes how terrorists have shattered innocent lives, listing attacks in three European cities, but somehow forgets that Islamists have taken far more lives of Israelis "simply out enjoying themselves" than of all Islamist terror victims in Europe combined.

At least 1,600 Israelis have been killed in terrorist attacks since the 1993 Oslo accords that were intended to foster Israeli-Palestinian peace. How many more Israeli casualties are needed before the New York Times starts to cover them as it would European victims?