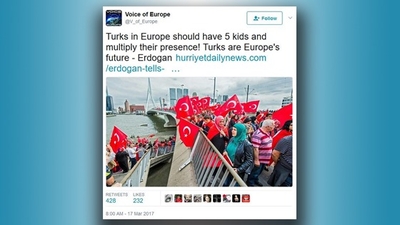 When tanks entered the streets of Istanbul and Ankara last summer in an attempt to overthrow the Turkish government, people swarmed the streets to fight them off. At the urging of their president, Recep Tayyip Erdogan, they pushed back against the coup, some waving Turkish flags, others waving guns. "What else would you do?" A friend in Istanbul asked me some months later. "When your government and your country are attacked, you fight back. It's to be expected."

Less expected, however, were the crowds of Turkish-Europeans who also took to the streets in cities like Rotterdam, where dozens demonstrated on the city's Erasmus Bridge, waving Turkish flags and, in some cases, crying out "Allahu Akbar." For many non-Turkish Europeans, the action felt almost threatening: Were these people Turkish or European? Could they reasonably be both? Or did they represent a fifth column, aiming to overtake Europe from within?

In Holland, members of Leefbaar Rotterdam (Livable Rotterdam), the populist political party founded by the late Pim Fortuyn, determined to address the issue head-on. They held a public panel discussion last week to debate the question of who these demonstrators were: traitors? Dual citizens with torn allegiances? Could they be true to both their Turkish heritage and to the Dutch culture in which they were born and raised?

Left unspoken were the more pressing questions, the ones the non-Turks really meant: do Dutch Turks identify more with the Islamist policies and values of Erdogan and his regime, or with the secular Enlightenment, the democratic culture of the West? What, after all, to think of the fact that the vast majority of European Turks voted for Erdogan in the November 2015 elections, and again voted against democracy in Turkey's April 16 referendum, which gave him virtually limitless powers until 2029?

While this particular debate took place in Rotterdam, once the home of the Renaissance humanist Erasmus, these questions have hovered over all of Europe since the 2004 terrorist attacks in Madrid and, even more, the 2005 attacks in London – and not only about the Turks, but about Muslim immigrants in general.

With Europe facing a near-continual onslaught of Islamist terrorist attacks often perpetrated by homegrown extremists, those questions feel more urgent than ever.

But both the issue and its urgency are far more complex than a matter of allegiance. For many second- and third-generation immigrant youth, especially those from Turkey and Morocco, it is also a matter of identity. As dark-skinned immigrants with names like Fatima and Mohammed, they are often discriminated against in their home countries. The values of their families and their religious leaders do not always mesh with the values of their communities and governments. But when they visit their cousins and grandparents in Anatolia and rural Morocco, they find they don't fit in there, either.

Many counterterrorism experts maintain that this situation makes Muslim European youth especially vulnerable to radicalization and recruitment by terror groups. As Belgian-Palestinian jihad expert Montasser AIDe'emeh has noted of Belgian Moroccan extremists such as the Paris and Brussels attackers, "The Islamic State is giving them what the Belgian government can't give them – identity, structure. They don't feel Moroccan or Belgian. They don't feel part of either society." And speaking to PBS's Judy Woodruff, Peter Neumann, director of the International Center for the Study of Radicalization, observed that "the cause [of radicalization] is ultimately a conflict of identity. It is about second- or third-generation descendants of Muslim immigrants no longer feeling at home in their parents' or grandparents' culture, at the same time not being accepted into European societies."

If this is true, then what to make of the Turkish-European dual citizens choosing, as most have, to support Erdogan's Islamist policies while living in the liberal West? Are they integrated, assimilated, into the cultures in which they live, as most insisted during the Rotterdam debate? Or are they rather true to the norms of a Turkey that is becoming increasingly religious, turning increasingly eastward, and to a president who is gradually unraveling the secular Western vision of the republic's founder, Mustafa Kemal Ataturk?

At the same time, does waving the Turkish flag when the country is attacked mean they are not actually Dutch? Should Dutch Jews not fly the flag of Israel, or Dutch-Americans have left their stars and stripes at home after 9/11?

"It's more than just flags," Ebru Umar, a Dutch-Turkish journalist who moderated last week's event, explained in an e-mail. "The flags symbolize who they are.... They claim to be soldiers of Erdogan." Hence, she said, "the people [demonstrating] on the [Erasmus] bridge were and are seen as not integrated. Ask them and they'll answer they are integrated. And [yet] they tell you of course they adore Erdogan." Indeed, she noted, they even stated it at the debate: "'You can't ask a child whom they love more: mum or dad.'"

It is a false equivalency, however. This is not about loving one parent more than another, but about accepting one of two opposing sets of values: those of secular democracies, or those of Islamist theocracies. There is no combining the two. There is no compromise.

Which is what makes these questions so very critical right now – not just for the Dutch, but for all Europeans, as they confront a complex, existential dilemma. Should they continue to alienate the growing population of young Muslims, and should those same young Muslims continue to resist assimilation, they will together be laying out the welcome mat for recruiters for jihad. But should Europe instead accept the Islamist leanings of those same Muslim youth, it will soon discover there was a fifth column after all – a movement to Islamize the West. And it will have succeeded.