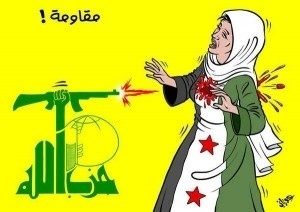 In a future conflict, Hizballah has the capacity to fire 1,500 rockets into Israel each day, overwhelming Israel's missile defense systems. Should such a scenario materialize, Israel will be forced to respond with unprecedented firepower to defend its own civilians.

Hizballah's advanced weapons and the systems needed to launch them reportedly are embedded across a staggering 10,000 locations in the heart of more than 200 civilian towns and villages. The Israeli military has openly warned about this Hizballah war crime and the grave threats it poses to both sides, but that alarm generated almost no attention from the global media, the United Nations, or other international institutions.

Like the terror group Hamas, Hizballah knows that civilian deaths at the hands of Israel are a strategic asset, because they produce diplomatic pressure to limit Israel's military response. Hizballah reportedly went so far as offering reduced-price housing to Shiite families who allowed the terrorist group to store rocket launchers in their homes.

But if the global media, the UN, human rights organizations, and other international institutions predictably pounce on Israel after it causes civilian casualties, why are they doing nothing to prevent them? Hizballah's very presence in southern Lebanon is a flagrant violation of United Nations Security Council resolution 1701, which called for the area to be a zone "free of any armed personnel, assets and weapons" other than the Lebanese military and the U.N. Interim Forces in Lebanon (UNIFIL).

The resolution also required Hizballah to be disarmed, but the terror group today has an arsenal that rivals that of most armies. Hizballah possesses an estimated 140,000 missiles and rockets, and reportedly now can manufacture advanced weapons in underground factories that are impervious to aerial attack.

Meir Litvak, director of Tel Aviv University's Alliance Center for Iranian Studies, agrees, adding that global attention would "expose Hizballah's hypocrisy in its cynical use of civilians as... human shields."

Even a concerted campaign to showcase Hizballah's war preparation is unlikely to change things, said Eyal Zisser, a senior research fellow at the Moshe Dayan Center for Middle Eastern and African Studies. Hizballah exploits the fact that "the international community is too busy and...weak to do something about it," Zisser said. All of "these talks and reports have no meaning. See what is happening in Syria."

Israel has targeted Hizballah-bound weapons caches in Syria twice during the past week. Syria responded last Friday by firing a missile carrying 200 kilograms of explosives, which Israel successfully intercepted.

If Hizballah provokes a war, Israel can legitimately attack civilian areas storing Hizballah arms if the Israel Defense Forces (IDF) first attempts to warn the targeted civilians to leave those areas, Litvak said. But "it will certainly be very difficult and will look bad on TV."

While Sunni Arab states are generally united against the Shiite Iranian-Hizballah axis, Litvak, Zisser, and Schweitzer all agreed that Israel could hope for no more than silent support from them when the missiles fly.

Indeed, the "Sunni Arab street" is likely to be inflamed by the images of civilian death and destruction caused by Israel that international media will inevitably broadcast, further limiting support for Israel from Iran's Sunni state foes.

Rather perversely, the Lebanese government has embraced the very terrorist organization that could cause hundreds of thousands of Lebanese civilian deaths by converting residential areas into war zones. "As long as Israel occupies land and covets the natural resources of Lebanon, and as long as the Lebanese military lacks the power to stand up to Israel, [Hizballah's] arms are essential, in that they complement the actions of the army and do not contradict them," President Michel Aoun told Egyptian television last month. Hizballah, he said, "has a complementary role to the Lebanese army."

Aoun's declaration means that Lebanon "takes full responsibility for all of Hizballah's actions, including against Israel, and for their consequences to Lebanon and its entire population, even though the Lebanese government has little ability to actually control the organization's decisions or policy," said INSS Senior Research Fellow Assaf Orion.

MK Naftali Bennett, a veteran of Israel's 2006 war with Hizballah, believes that Lebanon's official acceptance of Hizballah and its policy of embedding military assets inside residential areas removes any constraints on Israeli targeting of civilian areas. "The Lebanese institutions, its infrastructure, airport, power stations, traffic junctions, Lebanese Army bases – they should all be legitimate targets if a war breaks out," he said. "That's what we should already be saying to them and the world now."

In a future war, Hizballah is certain to try bombarding Israeli civilian communities with missile barrages. Israel, in response, will have to target missile launchers and weapons caches surrounded by Lebanese civilians.

But it need not be so. Global attention by journalists and diplomats on Hizballah's abuses could lead to international pressure that ultimately reduces or even prevents civilian deaths.

Those truly concerned about civilians do not have a difficult case to make. Hizballah has shown a callous disregard for innocent life in Syria.

Hizballah terrorism has claimed civilian lives for decades, including a 1994 suicide bombing at Argentina's main Jewish center that killed 85 people. As the IDF notes, "Since 1982, hundreds of innocent civilians have lost their lives and thousands more have been injured thanks to Hizballah."

If world powers and the international media genuinely care about avoiding civilian casualties, they should be loudly condemning Hizballah's ongoing efforts – in flagrant violation of a UN resolution – to cause massive civilian death and destruction in Lebanon's next war with Israel.