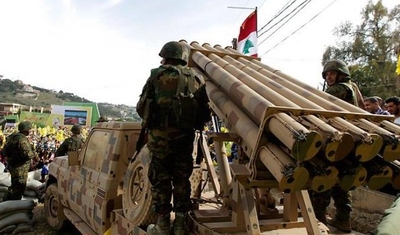 A recent report saying that Iran constructed underground missile factories in Lebanon for Hizballah would, if accurate, indicate a disturbing boost in the Shi'ite terror organization's ability to self-produce weapons.

Already, the Israeli defense establishment sees Hizballah as a powerful and radical army rather than a 'mere' terror organization due to its deep and sophisticated weaponry (which surpasses that of most states), and its hierarchical command structure.

An ability to manufacture destructive rockets and missiles would mean that the militant Islamist Lebanese-Shi'ite organization is no longer entirely reliant on arms trafficking from its patron Iran and ally, the Assad regime in Syria.

The report, made available by the Middle East Media Research Institute (MEMRI), was published in the Kuwaiti daily Al-Jarida. It cites an aide to the commander of Iran's Islamic Revolutionary Guards Corps (IRGC) as its source. The IRGC's Quds Force is an elite unit that runs Iran's extensive overseas operations to arm, finance, and strengthen Iran's regional proxies.

According to the Kuwaiti report, the IRGC built the arms-making facilities more than 50 meters underground and fortified them against air strikes before handing control of them over to Hizballah three months ago.

The report is well within the realm of the possible, Ely Karmon, a Hizballah expert and a senior research scholar at the International Institute for Counter-Terrorism in Herzliya told the Investigative Project on Terrorism. He pointed to a 2015 statement made by the IRGC's Aerospace Force commander, Brigadier General Amir Ali Hajizadeh, boasting that Tehran has provided "Syria, Iraq, Palestine and the Lebanese Hizballah resistance group with the needed know-how to produce missiles."

"The IRGC's Aerospace Force has developed to a stage in the field of missile industries that it can mass-produce different types of short- and mid-range missiles," Hajizadeh said.

Assessing the latest Kuwaiti report, Karmon said that it is "possible that these Hizballah military factories are in the Quseyr area in Syria, and not in Lebanon." Quseyr is an area of western Syria near Lebanon which has come under Hizballah control in recent years after being seized from Sunni rebel organizations.

Israel bombed targets in the area in the past, Karmon noted, likely as part of Israel's covert program to selectively disrupt of Hizballah's force build-up.

The Kuwaiti report also claimed that "a special department has been established at the IRGC's Imam Hossein University [in Tehran] to train Lebanese and other experts, and hundreds of experts have already been trained... The manufacture of the missiles does not take place in one factory; different parts are built in different factories and then assembled together."

The missile factories reportedly can produce surface-to-surface missiles with a range of over 500 kilometers – in other words, capable of hitting anywhere in Israel – surface-to-sea missiles, perhaps intended to hit Israeli ships and Israel's offshore gas rigs in the Mediterranean Sea, armed drones, anti-tank missiles, and other weapons. The production sites can also be used to make machine guns, mortars, and anti-aircraft guns.

Since the end of the 2006 war with Israel, Hizballah stockpiled an arsenal totaling 120,000 missiles – one of the largest of its kind in the world. The vast majority of these arms were manufactured in Iran and Syria and smuggled into Lebanon. A growing number are guided rockets and missiles, which Hizballah could use to try to use to overcome Israeli air defenses and target sensitive targets.

Iranian weapons transfers continue regardless of whether Hizballah has access to its own missile factories. Israeli Prime Minister Benjamin Netanyahu provided details on "the ongoing Iranian attempt to transfer weapons, advanced weapons, to Hizballah, via Syria," when he visited Russian President Vladimir Putin in Moscow earlier this month.

Hizballah also is training elite terror cells to infiltrate Israel during the next war, and to temporarily 'conquer' northern Israeli communities in a bid to demoralize Israelis.

These preparations, it is safe to assume, are being closely monitored by Israel.

Hizballah's deep involvement fighting for the Assad regime in Syria for four years also has boosted its power. The best form of training is combat itself, and its operatives have been exposed to Iranian commanders and technology on the battlefields of Syria.

Meanwhile, back in Lebanon, Hizballah has embedded the vast majority of its bases, rocket launchers, and command posts in civilian regions, including a massive maze of underground tunnels and subterranean compounds.

Yet all is not well in Hizballah's camp despite its clear and growing power. Hizballah is facing a dramatic economic crisis due to a shortage of cash flow from Iran, which itself has not yet received all of the funds it was expecting to get after signing the nuclear deal.

Hizballah's expenses are not only military and terrorist. They include many civilian and political activities in Lebanon, for which it is now struggling to pay. Additionally, the fact that it has sustained more than 1,500 casualties in Syria has demoralized sections of the traditional Lebanese Shi'ite support base.

Nevertheless, Hizballah is pushing to build up its massive offensive capabilities against Israel.

It seeks more accurate rockets and missiles, while its leader Hassan Nasrallah has repeatedly threatened to strike Israeli strategic targets such as ships carrying industrial ammonia to the Israeli city of Haifa, and Israel's nuclear reactor in Dimona.

This does not mean Hizballah is seeking a conflict with Israel now, but it does mean that should a new war erupt in the future, Israel's civilian population will face unprecedented threats.

Israel's defense establishment is making its own preparations accordingly, based on the understanding that this Iranian agent has developed into a full-fledged terrorist army.