How Israel is Adapting to the Growing Threat of Terror Armies 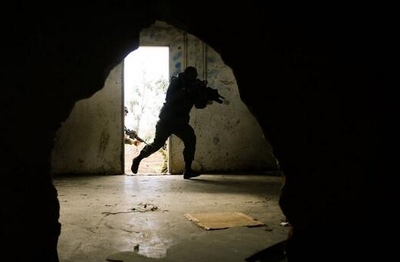 That member is an Artificial Intelligence-powered system that trawls through vast quantities of intelligence data, marking and recommending the targets it concludes are of the highest priority to disrupting enemy activity. The system, operated by the IDF's new Targets Center, passed its first test during that escalation, assisting the IDF in hitting dozens of PIJ targets in Gaza. The Center is one of several IDF upgrades being made to adapt with a changing security reality.

The goal of this race is to adapt to the growing threats posed to the country's home front, and to strategic targets such as ports and power plants from the terror armies located on Israel's doorstep – threats that will remain long after Israel is able to place the pandemic behind it.

A recent speech by Hizballah Secretary General Hassan Nasrallah, claiming an increase in the quantity of his organization's precision missile inventory, is the latest reminder of that danger.

Even through Nasrallah was engaging in psychological warfare against the Israeli people, and attempting to hide the fact that his organization is deeply entangled in Lebanon's economic and political crises, the attempts by Hizballah and its Iranian sponsor to produce precision guided missiles represent Israel's largest conventional military threat.

The term "terror army" is often used by the IDF Chief of General Staff, Lt. Gen. Aviv Kochavi, to describe the hybrid, heavily armed Islamist entities in the region. Part-guerilla force, part terror organization, and part hierarchical army, these sub-state adversaries are experts in embedding themselves in built up areas, using their own populations as human shields, and targeting Israeli civilians with large arsenals of surface-to-surface firepower.

These entities include Hizballah, Hamas, Palestinian Islamic Jihad, and Iranian-backed militias in Syria, Iraq, and even the Houthis in Yemen, who may be able to target Israel with missiles, and who fire on Saudi cities on a regular basis.

In Lebanon, Hizballah's arsenal is estimated at between 120,000 to 130,000 projectiles – one of the largest arsenals of its kind in the world – placing all of Israel in range. It also has field units embedded in every single village in southern Lebanon, including in bunkers and tunnels, whose job is to challenge a future Israeli offensive. Hamas, for its part, has a network of tunnels dug under Gaza for moving its fighters and weapons, a network dubbed "the underground city" in the Israeli defense establishment. Hamas has positioned its rocket launchers near hospitals, mosques, and schools. Although it is deterred by Israel and is not seeking a war at this time, any tactical incident has the potential to set one off anyway.

A joint exercise held Tuesday by Gaza's armed terror factions, in which they fired rocket into the Mediterranean Sea, also served as a reminder of the explosiveness of the Gazan arena.

In November, the IDF held a ceremony to mark the launch of its new Multi-Domain Strike Division – one of the latest products of the Israeli military's race to adapt to modern challenges posed by the terror armies.

The IDF envisioned the new division in a multi-year development plan called "Momentum."

Momentum calls for the creation of a military that can destroy enemy capabilities in record time, and with fewer Israeli casualties. It also calls for the creation of a fully networked military in which units are able to detect, share, and destroy enemy targets in just a few seconds, thereby shortening the amount of time that the Israeli home front and economy would be paralyzed by enemy fire.

In this context, the Multi-Domain Strike Division will act as a headquarters for designing force development, shaping military structure, knowledge, combat theory, training, and exercises, in order to fully integrate air, ground, naval, and cyber-attack capabilities in future Israeli maneuvers.

In 2021, Kochavi said, speaking during a ceremony to unveil the division in November, company and battalion companies of IDF ground forces will be able to share data and help activate drones, attack helicopters, and fighter jets above them as they fight.

"In the era of urban warfare, this is a moral imperative," he said.

The head of the Multi Domain Strike Division, Brig. Gen. Asaf Zalel, added, "The new path starts here, in establishing this unique organization, an effort between different uniforms and berets that are working together for a united, efficient and lethal strike force."

A sense of the IDF's new concept in dealing with its adversaries was reflected in a Hebrew-language paper published in late December by the former deputy chief of staff, Maj. Gen. (res.) Yair Golan, and Gal Perl, a military researcher.

The paper stated that "with the advancement of the threat to the home front, to the point that most of the national infrastructure is under the threat of precise missiles, we cannot take the risk of more long and indecisive wars. What is therefore required is an understanding that the era of limited campaigns ... has ended. The IDF must operate in a new era – the era of decisive [victory]. This has been forced on us, as stated, since the threat to the home front has become intolerable."

In any future war, the authors stated, the IDF must work to rapidly remove the threat to the home front, land a major blow on the enemy to "scorch defeat into its consciousness," and maintain a reasonable level of both domestic and external legitimacy in the process.

The only way to achieve this, they said, is to quickly reach the sources of rocket and missile fire. Terror armies will only feel the full power of the IDF if their locations are subject to a ground offensive, they argued, in which field units, working closely with the air force, will detect and destroy their capabilities as they move through enemy territory. This means systematically and rapidly eliminating rocket launch sites, command and control structures, bunkers, tunnels, enemy commanders and fighters, weapons storage facilities, and more.

In 2019, as part of the Momentum plan, the IDF unveiled its new Targets Center, made up of personnel from the Military Intelligence Directorate, the Israel Air Force, the Northern Command, and other departments, all working together for the common goal of "enlarging the quantity and quality of targets in all arenas, under a single roof."

The Targets Center, which operates within the Military Intelligence Directorate, has since become a target production factory, employing technology and personnel to enlarge the databank on enemy targets every day. It is able to automatically detect and recommend an array of different targets, which presumably include launch sites, enemy positions, command posts, and suspicious movements on the ground.

The Center taps a variety of technology experts, data analysts, data engineers, and specialists from the Northern Command (which is responsible for Lebanon and Syria) to work closely with one another, breaking down traditional barriers between units.

According to the IDF's website, the Center employs an algorithm that scans all of the information held by the Military Intelligence Directorate, and conducts an in-depth check, analyzing, automatically cross-referencing data, and combining existing information. Instead of human operators combing over the data, manually adding up the pieces of the puzzle and looking to mark out targets themselves, the system does the work faster and better than they ever could.

Afterwards, it provides recommendations on which targets to hit in future combat. The recommendations are then checked by human researchers, who first verify that it is indeed a target, and then assess whether it is of high quality.

If it passes this "filter," the target goes up a chain of approvals and can then be acted upon when needed. The system uses feedback from its personnel to learn how to work better in the future, using its Artificial Intelligence to improve its accuracy.

The system combines information from a variety of sources, such as human intelligence, visual intelligence, electronic signals, while also factoring in changes in the field, weather conditions, the distance of targets from the border, and the estimated risks to noncombatants in the area. It then reaches conclusions on how best to strike – from the ground, air, and sea, or perhaps via the cyber arena.

The result is a far more rapid process of acquiring targets with advanced technology. The system can gather targets on Hizballah, Hamas, and other adversaries, and played a role in the November 2019 two-day escalation between Israel and Palestinian Islamic Jihad in Gaza, which followed the IDF's assassination of Bahaa Abu Al-Atta, the Gaza-based commander of the Iranian-backed faction. The system helped the IDF attack dozens of PIJ targets and terror operatives who were on their way to fire rockets at Israeli cities.

Another example of the IDF's adaptation to new threats is its decision to create a new directorate that is entirely focused on the Iranian threat and to shaping the IDF's future development.

The Third Circle (a reference to countries in Israel's outer periphery) and Strategy Directorate is made up of personnel whose only task is to broadly examine Iran's activities throughout the Middle East and create a corresponding strategy.

With Iran's subversive fingerprints active in Lebanon, Syria, Gaza, Iraq, and elsewhere, nourishing the terror armies with weapons, funding, doctrine, and training, as well as Iran's own missile and nuclear programs, the new branch is designed to see the whole picture of Tehran's dangerous attempts to dominate the region, rather than focus in on any one part while not seeing the other part of the broader view.

The race between the IDF and the terror armies looks set to continue long after the pandemic leaves the world.