Kurdish Factions Turn Guns on Each Other in Yazidi Homeland 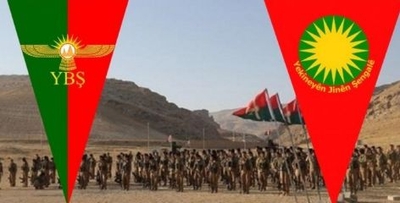 Yazidis living in Iraq's Sinjar region are on edge in the wake of fighting last week between rival Kurdish factions. Some Yazidis joined in the fighting against Peshmerga belonging to Iraq's Kurdistan Regional Government (KRG).

Some Yazidis, who are ethnic Kurds, believe the KRG failed to protect them from marauding ISIS fighters in 2014, leading to a genocide.

The KRG denies deliberately abandoning the Yazidis, emphasizing that ISIS simply overran the Peshmerga's positions, and affirming that it supports the Yazidis.

The Yazidi-dominated Shengal (Sinjar) Constituent Assembly released a statement Monday asking the United Nations and other "benevolent" states to intervene and end the fighting.

"Don't let the [Yazidis] suffer through another massacre," the Assembly statement said. "We are also calling on the UN to stop their aid for the [P]eshmerga. Because most of the aid the [P]eshmerga receive are supposed to be for [Yazidis], but the aid and weapons and ammunition are used against them."

Fighting erupted Thursday night in Iraq's Sinjar region near the Syrian border when Peshmerga forces loyal to KRG President Masoud Barzani clashed with those aligned with the Marxist-Leninist Kurdistan Workers Party (PKK) – a Kurdish group fighting for independence from Turkey. These clashes came days after Turkish President Recep Tayyip Erdogan met with Barzani in Ankara, according him with full diplomatic honors. The KRG wants independence from Iraq once Mosul is freed from ISIS, Barzani said in an interview published Monday with Italy's La Stampa.

This fighting puts the United States in an awkward position because the KRG and the Syrian Kurdish factions aligned with the PKK all receive American support. The State Department classifies the PKK itself as a terrorist group.

Only a handful of casualties were reported. A Facebook account aligned with the PKK posted the pictures of four men it identifies as Yazidis who were killed in clashes with the Peshmerga. The pro-KRG outlet Basnews likewise reported that four PKK commanders were killed in the fighting.

Should the KRG declare independence, the PKK aligned groups, including their Yazidi allies the Sinjar Resistance Units (YBS) – under the leadership of the Shengal Constituent Assembly – will resist.

"Only PKK advisors were in the region to train us [Yazidis] to defend ourselves and protect our Iraqi identity and nothing more," YBS commander Saeed Hassan told pro-Iraqi government Afaq TV. "There is a ceasefire now for military reasons but the problem hasn't ended and clashes will resume again and next time it will be even bigger because we don't accept their presence there." 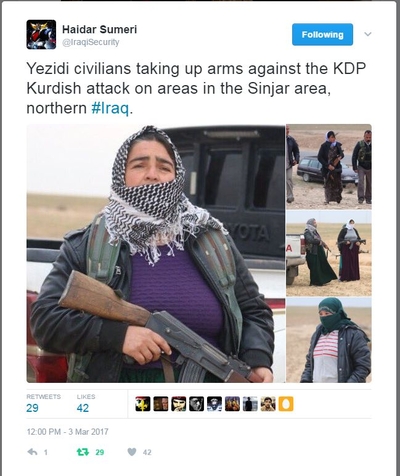 The Shengal Constituent Assembly statement also demanded that the Peshmerga withdraw, saying that those who "abandoned our people in August 2014, stay away. Nobody has forgotten about that."

The Yazidis feel a debt of gratitude to the PKK for rescuing them from ISIS after the Peshmerga withdrew in 2014, Georgia State University Professor Benjamin Kweskin told the Investigative Project on Terrorism. Even Barzani acknowledged the PKK's role in rescuing the Yazidis when he visited a Yazidi camp in August 2014.

"The KRG as a political entity has not had a good relationship with the Yazidis specifically in Sinjar, period – historically, currently and of course during the beginning of the genocide in 2014," Kweskin said. "For the majority of the Sinjari Yazidis, they see and saw the PKK as being their saviors."

For its part, the KRG accuses the PKK of playing a destabilizing role in Sinjar. The KRG asserts it has the right to mobilize its Peshmerga forces whenever and wherever it wants. This includes the Sinjar region even though it lies outside the KRG's established official borders due to a never-implemented provision of Iraq's 2003 constitution.

"The KRG has a legitimate concern about the PKK's presence in Sinjar and the destabilizing and divisive role it is playing among the [Yazidi] community," KRG spokesman Alex Ebsary said in an emailed statement. "However, we and the majority of the [Yazidi] community ask that the PKK and its affiliates withdraw from Sinjar and allow the process of reconstruction and reconciliation to go ahead.

"The well-being of the [Yazidis] and all the people of Sinjar is our priority."

Mir Tahsin Beg, head of the Yazidis worldwide, echoed the KRG and urged the PKK to leave Sinjar and stop attacking the Peshmerga. He also disagreed with the Shengal Constituent Assembly, saying Sinjar should be controlled by the KRG.

Tensions between the PKK and Barzani's Kurdish Democratic Party (KDP) have been building over the Sinjar's future. Forces aligned with the PKK and Peshmerga forces had been jointly controlling the center of Sinjar.

"This bad blood, if you will, isn't anything new unfortunately," Kweskin said. "The problem here is that the PKK is seen as the proxy for the Syrian regime and Iran. You have the proxy war between Turkey and Iran in Syria on the other hand. And the KDP is seen as a proxy for Erdogan in a sense."

Erdogan warned in October that Turkey would not let the PKK turn the Sinjar region into a stronghold. Turkish Deputy Prime Minister Veysi Kaynak reinforced this statement in December, warning that Turkey would directly intervene if "Barzani did not get the PKK out of Sinjar [Shingal]."

The Shengal Constituent Assembly likewise blamed Turkey for last week's Peshmerga attack against the PKK-aligned forces. The assembly claimed the KRG forces – known as the Rojava Peshmerga, or Roj, for short – was comprised of Syrian Kurdish refugees, agents from Turkish intelligence and rogue ISIS elements that had been trained by Turkey and the KDP.

"The allegation that the KRG is doing Turkey's bidding with regards to Sinjar is false," Ebsary said.

The PKK and its allies receive salaries from the Iranian-backed Shiite militia coalition known as Hasd al-Shaabi, which has formal sanction from Iraq's government in Baghdad, Peshmerga Forces Chief of Staff Jamal Iminiki told Kurdistan 24.

"They are directed and [controlled] by Hashd al-Shaabi, Iran, and Syria to complete the Shia Crescent in the region," Iminiki added. "Neither PKK nor any other forces will be allowed to call themselves the owner of those areas."

This assuredly will not be the end of Turkey and Iran's proxy war that has rival Kurdish factions squaring off against each other.