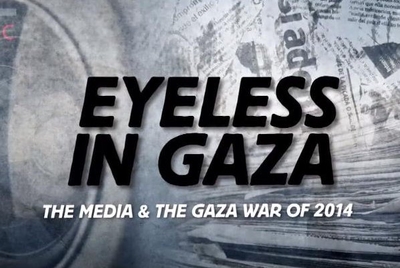 Hamas operatives burst into the Associated Press (AP) Gaza bureau during the 2014 war with Israel, angered by a picture shot by an AP photographer. Gunmen threatened the AP staff, which never reported the incident.

The incident shows that Hamas can control what journalists report, and what they don't, former AP Middle East reporter Matti Friedman says in a new documentary, "Eyeless in Gaza."

Producer Robert Magid's 50-minute film, which is screening via pay-per-view online, examines the flaws and challenges in reporting on the 50-day war.

Magid said he wanted to "set the record straight and provide context," after being appalled at news coverage that ignored Hamas' practice of launching rockets from civilian areas. That omission allowed the media to push a false narrative that "Israel was callous in their bombing."

The sullied moral image of Israel that emerged from the media's biased coverage sparked public outrage and anti-Semitism. "Muslims will crush the Jews as they did in Khyber 14 centuries ago," protestors in the film shout. Another says: "I see the Jews in Israel as total Nazis."

Reporters routinely failed to show the history leading up to the conflict or how Hamas instigated it. Magid provides viewers with some brief historical context: Israel expelled 10,000 of its own citizens from the Gaza Strip in 2005 and offered the Palestinians their first chance at self-rule. But Hamas took over the territory and turned it into an Islamist terror state, rather than a model for responsible self-rule and peaceful coexistence with Israel.

Viewers see how attack tunnels exemplify Hamass policy of diverting public resources to pursue terrorism. Israel allows high-quality cement into Gaza in response to the humanitarian need to rebuild damaged buildings, only to discover the same cement being used to build massive underground tunnels whose only purpose is to target Israelis. Each tunnel costs about $3 million, and an Israeli military spokesman interviewed in the film estimates $100 million in resources were diverted.

Despite Israel's unprecedented efforts to minimize Gaza's civilian casualties, the film shows how Hamas works to maximize them.

"The Israeli army called me, they asked me to leave Al-Sajaeya," says one Gazan. "We stayed at home because Al Aksa and Al Quds [Hamas] radio stations told us 'Don't leave your homes, it's rumors.' We remained in our homes, but when we saw the bombs pouring on us, we miraculously got out...Five of my brothers' sons were killed, and the houses destroyed."

The Israel Defense Forces (IDF) went to great lengths to spare civilians, issuing warnings by leaflets, SMS messages, the "roof knock" technique, and social media. Col. Richard Kemp, the former commander of British forces in Afghanistan, notes in the film "the immense efforts that the IDF took when fighting in this very challenging environment, to minimize the number of civilian deaths [even though] Hamas used human shields virtually constantly. They deliberately site their weapon systems, and their fighters among the civilian population."

"Eyeless in Gaza" shows the underreported perspective of Israelis trying to survive Hamas rocket attacks, including a huge explosion on a populated beach, and people racing to shelters with just 15 seconds to reach them. Israel's Iron Dome defense system is no silver bullet: "10 percent [of] rockets...could hit you," notes Tal Inbar, head of the Space Research Center at the Fisher Institute for Air and Space Strategic Studies in Herzliya. "And...if the enemy is firing thousands of rockets...10 percent...is quite a lot." Even intercepted rockets can still cause shock and injuries from falling shrapnel.

Kneejerk global condemnations of Israel triggered by a lopsided casualty count resulted, at least in part, from the media's failure to cover the true nature of the mass casualty-threat facing Israel. Hamas launched thousands of rockets at schools, hospitals, and densely packed Israeli neighborhoods, demonstrating the group's intent to kill many thousands of civilians. Hamas failed only because Israel had invested billions in a rocket defense system and Israelis regularly scurried to bomb shelters despite the disruption to their lives.

Former Russia Today correspondent Harry Fear, who calls himself "one of the most Palestinian-sympathizing journalists in the world," notes that Palestinians "rejected cease fires, which could have saved...thousands of lives..."

Fearing violent retribution from Hamas, journalists engaged in collective self-censorship, he told Magid. Just about all foreign correspondents witnessed Palestinian war crimes without reporting them. "Rockets were being fired consistently from densely populated areas," he said. He was expelled from Gaza after reporting on Twitter such fire.

An Indian television crew aired footage of Palestinian terrorists firing rockets from civilian areas only after it had left Gaza. Its report, shown in "Eyeless in Gaza," notes that the rocket fire "will obviously have serious consequences... for those who live here, should Israel choose to retaliate."

Hamas' intimidation of journalists produces flawed, misleading coverage, as Friedman elaborates: "Most of the work of the international media in Gaza is done not by western journalists ... but by local Palestinians from Gaza: fixers, translators, reporters, photographers ... their families are in Gaza, and they're not going to get Hamas angry. And because these people largely shape the coverage, that ends up having a very significant effect."

Fear decries the limits to free speech in Gaza, citing a 2014 poll indicating that 80 percent of Palestinian journalists exercise self-censorship for fear of retribution.

Similarly, Friedman says in the film, "I understand why reporters censor themselves ... in Gaza. What I don't understand is why the news organizations haven't made clear the restrictions under which they operate in Gaza, so that news consumers can understand that they are seeing a warped picture."

The intimidation can be worse for Palestinian journalists. Ayman Al Aloul describes his imprisonment and torture by Hamas after he refused to stop writing about Gaza's extreme poverty, and Hamas' failed economic policies. "They started beating me and cursing at me. When I went back inside [my cell], I feared someone would be sent to end my life... I was scared they would say, 'He died from cold or hunger.' I was really scared."

Conflicts that receive far less media attention than the Israeli-Palestinian conflict, despite being exponentially bloodier, also have been neglected, thanks to the media's obsession with Israel. The film notes that, since 2011, nearly half a million people have been killed or wounded in Syria, compared to about 2,000 in Gaza. "160,000 Palestinians lived in Yarmouk prior to 2011. [Because of] Syrian...bombing and starvation policies, there are now 18,000."

Thus, campus protesters who routinely accuse Israel of "genocide" and "massacre" are either grossly misinformed (at least in part because of media bias) or simply anti-Semitic.

UN Relief and Works Agency (UNRWA) spokesperson Chris Gunness acknowledges a double standard by the media and Arab governments' in terms of attention given to the plight of Palestinians in Syria versus Gaza. But when asked why UNRWA failed to condemn Egypt's security-motivated destruction of thousands of homes along the Gaza border, he says only, "we are not mandated to work in Egypt."

Friedman notes, "If Israel did 1 percent of that, of course the international community would be in an uproar. I think people aren't interested in Arabs in general, or what Arabs do to each other. I think they're basically interested ... in the actions of Jews. And that's why Egypt can destroy entire neighborhoods [bordering] Gaza, as it did recently, and the world kind of yawns. That I think proves that ... the story being told here by the international media is not a story about current events. It's a story about something else. It's a morality play starring a familiar villain [the Jews]."

This hostile paradigm explains the failure of Western media to report on the anti-Semitic nature of the Hamas charter, which blames all of the world's woes – including every major war and revolution, and even the Holocaust – on the Jews, while calling for their annihilation, Friedman says in "Eyeless in Gaza."

"If you say that Hamas is anti-Semitic, if you quote their charter, if you look too closely at exactly what their goals are, and who they are, then it would disrupt the narrative, according to which Israel is an aggressor, and the Palestinians are passive victims who have reasonable goals," Friedman says.

Nevertheless, the media's failure to include critical facts like those exposed in "Eyeless in Gaza" encourages terrorist groups like Hamas to embrace tactics intended to maximize civilian casualties. The resulting global condemnation of Israel for Gazan deaths only encourages Hamas to jeopardize civilians in the next round of violence.

As "Eyeless in Gaza" highlights, the kind of journalism that covered the 2014 war in Gaza distorted the truth, abetted a terrorist group, and strengthened the party most responsible for Gaza's misery and ongoing hostilities with Israel. For more on the film, click here.