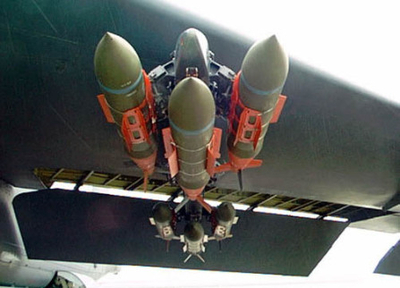 Faced with an array of developing threats to their stability and survival, Sunni Arab states have gone on an unprecedented military spending spree, buying up some of the very best capabilities the West has to offer. This development holds the potential for danger should these states be overrun by radical Islamists.

As long as the Sunni governments, guided by concerns over Iran, ISIS and other extremist actors, remain firmly in power, possessing high quality Western weapons in such large quantities will serve their goals of defending themselves.

But should the Sunni countries disintegrate into failed states, or undergo an Islamist revolution – an unfortunate yet distinct possibility in the 21st century, chaotic Middle East - Israel and the West could face an explosively dangerous development.

An organized Islamist rise to power would see the military forces of such states come under the command of belligerent decision makers. Alternatively, a failed state scenario would mean that military bases in these countries could be looted, and deadly platforms taken over.

Either way, the scenario of jihadists seizing game-changing military capabilities is real enough for Israel to acknowledge that it is planning ahead for it as a necessary precaution.

His air force must know how to act as a precise surgeon, Eshel said, able to conduct pinpoint strikes based on fine intelligence. But it also must be able to operate like a "big hammer" able to deal with large-scale threats. In the tumultuous Middle East, he said, it seems unreasonable to believe that the current situation will remain as it is. "In five, 10, or 15 years, states can fall," he warned.

Eshel was referring to pragmatic Sunni states that, like Israel, are deeply threatened by Iran's expanding radical Shi'ite axis, and by Salafi jihadist Sunni groups that are bent on destroying all countries that do not fit their vision of an extremist caliphate.

"Even if we have shared regional interests [with these Sunni countries now], we do not know what will happen in the future. Western military sales to these countries have reached $200 billion. This is state of the art weaponry. It is not just about the quantity," Eshel said. It is the Air Force's responsibility to assume that "something will collapse."

Most of the Arab countries' spending spree has gone into their air forces and surface-to-air missiles. The Israel Air Force must ensure it can deal with these capabilities, he added, in the event of future jihadist revolutions.

In the same week that Eshel spoke, the U.S. State Department announced the first weapons sales to Gulf states under the Trump administration, pending approval by Congress.

The sales reportedly include $400 million worth of helicopter gunship parts and air-to-air missiles to Kuwait, and $525 million for intelligence balloons to Saudi Arabia. ISIS has already built and deployed its own armed drones, according to reports, and if its goal of seizing control of state assets were realized, it could try to use some of the means on the battlefield.

Gulf Arab countries continue to break records in their rush to purchase military hardware. As part of its bid to deter Iran and boost its ability to hit the Islamic Republic's capital, Tehran, Saudi Arabia modernized its missile arsenal in recent years, purchasing Chinese medium-range surface-to-surface missiles from China, in a deal reportedly facilitated by the CIA.

More recently, the Saudis, who are leading a coalition against Iran-backed Houthi Shi'ite rebels in Yemen, spent $179.1 billion on weapons in 2016, and intend to spend $190 billion in 2017.

Saudi Arabia in recent years has replaced Russia as the third largest defense spender in the world. Salafi jihadists would like nothing more than to topple the Saudi royal court, which they see as a Western puppet, and take control of Islam's holiest sites, Mecca and Medina.

Egypt, too, has joined the shopping rush, becoming the world's fourth largest defense importer in 2016, buying up arms from the U.S. and France, as well as submarines from Germany.

Egypt, which is in a state of deep civil conflict with the Muslim Brotherhood, is also fighting a stubborn ISIS jihadist insurgency in its Sinai province. ISIS' terror campaign has claimed many lives among Egyptian security forces, and threatens to spread to other areas of the country.

After the fall and disintegration of Syria, Iraq, Libya, Yemen, the idea that the Middle Eastern map will remain unaltered in the coming years is far from certain.

Had Israel, according to international media reports, not bombed Syria's nuclear weapons production facility in Deir Al-Zor in 2007, the area, now filled with ISIS, could have seen nuclear weapons fall into the hands of genocidal jihadists.

Should Sunni states begin their own nuclear programs in response to Iran's own future nuclear efforts, the danger of atomic bombs falling into Islamist hands would increase.

There is no alternative but to plan for such contingencies in the current unpredictable regional environment, where today's rational states could be replaced by sinister forces tomorrow.