The Left Lost Its Logic On Israel 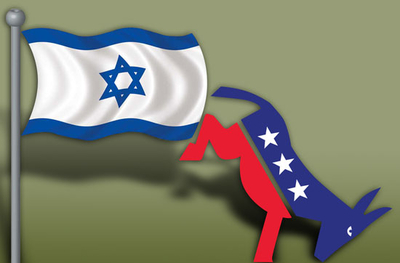 Support for Israel among Democrats has plummeted in recent years, a new Pew poll shows, with about as many – 31 percent – saying they sympathize more with the Palestinians than with Israel, which garnered 33 percent support.

By contrast, 74 percent of Republicans surveyed sympathize more with the Jewish state. That is the widest partisan gap since 1978.

A similar poll last year found a deep divide within the party, with conservative and moderate Democrats favoring Israel over the Palestinians by 53-19 percent.

This trend has accelerated during President Barack Obama's tenure. During Israel's 2014 war with Hamas, 61 percent of Democrats sympathized with Hamas and hundreds of left-wing historians openly sided with the terrorist group.

Bernie Sanders, whose liberal support nearly won him the 2016 Democratic primary, sought to empower anti-Israel figures like Cornel West – a supporter of the boycott, divestment, and sanctions (BDS) movement – and James Zogby of the Arab American Institute.

President Obama's refusal to veto an anti-Israel U.N. resolution last month was ranked as the most anti-Semitic incident of 2016 by the Simon Wiesenthal Center. When Congress condemned that resolution, U.S. Rep. Keith Ellison, a leading contender to run the Democratic National Committee, voted against it.

This hostility toward Israel is not limited to the American Left.

In the UK, it often coincides with anti-Semitism. As Jonathan Tobin observed, Labour Party leader Jeremy Corbyn has been "openly sympathetic with Hamas and Hezbollah," has "campaigned for the release of terrorists convicted of attacking Jewish targets," and "praised vicious anti-Semites." The co-chairman of the Oxford University Labour Club resigned after the organization voted to endorse Israel Apartheid Week. The club has a growing record of anti-Semitic and anti-Israel incidents. Last May, Britain's Labour Party secretly suspended 50 of its members for anti-Semitic and racist comments.

France's left-wing government just convened a 70-nation "peace conference" that was hostile to Israel. France has summoned far less international pressure to the exponentially bloodier conflict next door in Syria. Moreover, the French government funds French, Israeli, and Palestinian organizations that support and promote BDS campaigns against Israel, a report by NGO Monitor shows. Such boycotts are illegal under French law.

France also funds several other NGOs with alleged ties to the Popular Front for the Liberation of Palestine (PFLP) terror group, the report notes.

In the West, the political left considers itself "progressive," yet it increasingly targets the only Mideast country that actually embraces progressive values such as the rule of law, gender and sexual equality, and freedom of religion and speech. "Progressives" attack the only Mideast country making progress for all of humanity in science, technology, and medicine – from a crowdsourced solution to traffic (Waze) to breakthrough research on melanoma and leukemia.

Yet, on university campuses, where the minds of future politicians are formed, hatred of Israel and Jews has become endemic. The AMCHA Initiative, a non-profit organization that tracks BDS and anti-Semitic activity on U.S. campuses, reported more than 600 instances of such activity in 2016.

So why do liberals embrace illiberal players in the Arab-Israeli conflict? Double standards, underdog favoritism, media bias and group think, and prejudice at institutions like the United Nations.

Because Israel is a country of laws and Western values, Western critics often hold Israel to a standard that no democracy could meet. Alan Dershowitz captures the standard that should apply: "Name a single country in the history of the world faced with internal and external threats comparable to those faced by Israel that has ever had a better record in human rights; a better record with compliance of the rule of law; a better record of concern for civilians?"

In addition, media coverage often is skewed by Palestinian intimidation and deception, by reporters who uncritically favor underdogs, and by sloppy journalism and outright bias.

Hamas physically intimidates journalists who dare to defy its propaganda goals, thus distorting both the "facts" and the photos distributed to the world.

"Pallywood" – the practice of staging casualties and defaming Israel – has been deceiving journalists for at least 16 years. A particularly galling Pallywood example from 2015 was the inflammatory lie – by "moderate" Palestinian Authority President Mahmoud Abbas – that Israeli forces "executed" a 13-year old after an attempted terrorist attack. The truth: the child was treated in the same Israeli hospital as the boy he tried to murder.

Even Amnesty International acknowledged the unreliability of "eyewitnesses" in the conflict.

By contrast, during the 2014 war, Hamas executed 23 Gazans and tortured dozens of others.

In September 2015, Hamas imprisoned Gazans for protesting over a lack of electricity, causing some Gazans to admit that they prefer Israeli rule to Hamas.

Consistently sloppy journalism also poisons public opinion against Israel. News organizations often fail to identify the terrorist and the victim when reporting on Arabs killed by Israelis trying to defend themselves from a terrorist attack. Such missing context creates the false impression that Israelis wake up every morning asking how they can hurt Arabs.

The BBC's distortions often turn terrorists into victims. Its bias is so egregious that even its former chief complained: "Regrettably, this is not the first time the standard of reporting and impartiality has been unsatisfactory in recent weeks. On Saturday 3rd October, I was disappointed to see the BBC News website publish a misleading and counter-factual headline: 'Palestinian shot dead after Jerusalem attacks kills two'. I note reports that this headline underwent four revisions following public criticism." The BBC's horrible headlines continue, describing the terrorist in last month's Jerusalem track-ramming attack as a "Driver of a lorry...allegedly ramming pedestrians."

Thus, the "free press," which is supposed to act as a check on the government, ends up abetting its misinformation campaign against Israel.

The Obama administration and most of the political left promote a kind of anti-settlement religion that blames the lack of peace with the Palestinians on settlements. This position ignores the last century of Arab Muslim attacks on Israelis, starting decades before any settlements existed. The anti-settlement religion axiomatically affirms that settlements are illegal, even though legal scholars have concluded otherwise. The same religion also ignores Israel's removing the settlement of Yamit for peace with Egypt in 1982, and its unilateral withdrawal from Gaza in 2005. Those actions did nothing to persuade Palestinians to pursue peace, as they responded with more than 10,000 jihadi rocket attacks aimed at Israeli civilians.

Liberal support for illiberal players is illogical and counterproductive. If "progressives" choose only to blame Israel and never ask Palestinians to embrace liberal values, stop their incitement to violence, renounce terror, and accept Israel as the nation-state of the Jewish people, then such "liberals" have mislabeled themselves while making peace less likely.