Sümeyye Erdogan Bayraktar used her address at the Muslim American Society (MAS) and Islamic Circle of North America (ICNA)'s joint convention in Chicago to defend her father's regime and lash out at the "cult" she says is trying to tear it down.

Erdogan has cracked down on political opponents and journalists, a process dramatically accelerated by a failed coup attempt last summer. In her remarks to the Muslim American Society (MAS) and Islamic Circle of North America (ICNA) joint convention, Bayraktar denied that Turkish democracy and press freedoms are under assault.

Instead, she suggested that the "Gülen cult," led by Fethullah Gülen, a Turkish Islamist leader exiled in Pennsylvania, poses Turkey's greatest threat. Erdogan blamed Gulen for masterminding the coup attempt.

"The fact is every person, regardless of their profession, has to face the full consequences of law if they have links to a terrorist organization or promote terrorist propaganda," Bayraktar said. "There is not one journalist in Turkey who is imprisoned for journalistic activities, nor for criticizing the president."

Just two weeks ago, Human Rights Watch released a 69-page report detailing Turkey's "crackdown on media freedom that had already been going on for over a year." 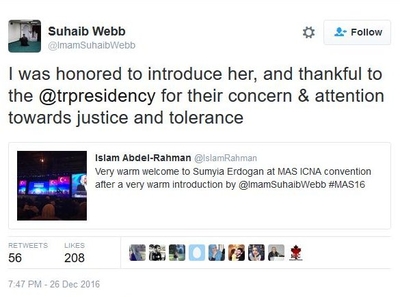 But that didn't stop Suhaib Webb, former imam of the Islamic Society of Boston Cultural Center, from expressing his pleasure over the "honor" of introducing Bayraktar's speech. He added that he was thankful for Erdogan's "concern & attention towards justice and tolerance."

"I don't have words. Thanking Erdogan for his tolerance and justice," activist Rabia Chaudry sarcastically replied on her Facebook page.

On Wednesday, Chaudry denounced leaders of major U.S. Islamist organizations for embracing Erdogan despite questions about his human-rights abuses.

"Am I crazy to think the embrace of this regime is dangerous, unethical?" Chaudry asked. "Am i the only one who wonders how the same groups and individuals in the US who are likely going to be the target of any future Muslim Brotherhood witchhunt are supporting a man who is engaged in his own witchhunt? Do Muslims just really love strongmen and dictators?"

"Ironic given that for many, justice and tolerance are completely denied in Turkey. Again, let's beware of our 'blind spots' @ImamSuhaibWebb," Rehab wrote.

MAS, ICNA, and other U.S. Islamist groups are allowing themselves to become tools of Turkish foreign policy, Abdullah Bozkurt, the exiled former Ankara bureau chief of the English language, anti-Erdogan newspaper Today's Zaman that was shuttered by the Turkish government in March, told the Investigative Project on Terrorism. Erdogan's strategy is akin to Iran's clandestine cultural and education programs that use aligned groups to manipulate popular perception and policy, Bozkurt said.