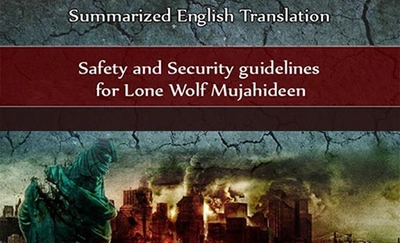 "I think the manual format gives them sort of a how-to process and therefore it's another indication of the danger we face in dealing with these self-motivated jihadists," said former FBI Associate Deputy Director Oliver "Buck" Revell. "I think it shows a great deal of critical analysis at the heart of the movement and that they are certainly knowledgeable, and they are not ignorant of our methodologies and even our technical capabilities, and we would be wise not to underestimate their capabilities."

It notably instructs lone jihadists and members of terrorist cells to conceal their Muslim identities in the West.

"You should make sure to not look particularly attached to religion. A man who works on a secret operation should meddle in the general population. If you can avoid having a beard, wearing qamis (Islamic clothes), using miswak (a sort of toothbrush recommended in the hadiths), and have a booklet of dhikr (Islamic devotional booklet) with you, it's better. Also, you shouldn't be going to often to places like mosques, Islamic institutes or Islamic libraries. You should also wear western-style cloths to appear neutral and not draw attention to yourself."

The manual also directs jihadists to have plausible cover stories such as posing as engineers, doctors or tourists and instructs them not to rush their attacks.

"The advantage of the lone wolf here is that he is already established in the West, his entire life is a cover story – and a very strong one at that. So use that to your advantage. Be patient, don't rush anything, put your trust in Allah," it says.

"They want to give the impression that they are everywhere and that anyone could be a spy," Shaikh said.

The manual repeatedly cites the prophet Muhammad or his companions for religious justification for its recommendations.

The guide, an abridgement of earlier Arabic instructions to jihadi cells translated into English, instructs jihadists how to conceal their plots from Western intelligence and security services. It repeats instructions found in other jihadi manuals published by al-Qaida or by the Islamic State in recent years, including "How to Survive in The West" and "Military Studies in the Jihad Against the Tyrants," the latter of which British police recovered from an al-Qaida member's home in Manchester in May 2000. Al-Qaida member Ali Mohamed, who infiltrated the U.S. Army and CIA in the 1980s, wrote the guide found in Manchester using information he gathered from U.S. government sources.

"Surprise is half of victory, and to surprise the enemy in both the time and location where you will hit maximizes your chance of success," the manual says.

It notes that the 9/11 attacks highlighted this principle because Americans became complacent that terrorists would not hit the U.S. homeland. Hence, they focused on fortifying their embassies abroad, hiring guards, and increasing security and defending their naval vessels across the Muslim world.

"The US never thought we would hit them at home," it says.

It includes case studies of successful operations such as the 9/11 attacks and failures from the jihadist perspective such as the capture of Abu Zubayda in Pakistan. It makes recommendations based on plots foiled by the FBI or other agencies.

It instructs jihadists to avoid drawing attention to themselves and advises that each jihadist cell "be entirely independent of each other." This way no one can connect jihadist operations with each other.

It also suggests that cell leaders inform their subordinates about planned terror operations on a need-to-know basis to lessen chances of compromising plots if a cell member gets captured.

"That's tradecraft we employ with our own – both our intelligence services and military and investigative services," Revell said. "They employ [this] sort of tradecraft to identify, penetrate and neutralize operations. The fact that they do learn even from failures I think is an even more menacing circumstance than we've had in the past.

"These are not ignorant peasants off the field; these are people who have both education and technical skills that are commensurate with our capabilities."

"So what was the result? When they wanted to launch the attack they got arrested," the manual says.

It specifically names Shaikh as the type of person to look out for, noting that he convinced the Toronto 18 that he was one of them. At the same time, he actively worked with the Canadian Security Intelligence Service (CSIS) to provide it with intelligence.

Shaikh suspects the author named him due to his efforts online and elsewhere to counter the Islamic State narrative and deter Muslims from joining.

"They could have named others as well such as Morten Storm [the Danish-born spy who infiltrated al-Qaida in the Arabian Peninsula for the CIA]..., but they don't reference it," Shaikh said. "I'm thinking that [they named me] because they know of me and that I interface with their guys online."

The guide advises jihadists to purchase ingredients for explosives in small quantities from different stores. With other weapons, jihadists are advised to test the weapons before carrying out their operation because the FBI gives would-be jihadists inert weapons, and to test the dealer to ensure he or she is not a spy.

"With the presence today of social media, Google and so on, collecting intel on a target has become significantly easier than 10 years ago. There is today a part you can do online from your home, and some other specific info you can complete with an inspection on the target's location site," the manual states.

All of this shows that the Islamic State knows a lot about us and our capabilities, and we would be foolish not to take them seriously because they have the ability to collect and analyze intelligence and hit their targets, Revell said.

now my question is you know where they at so why haven,t you do something to destoy the them permantly.