Palestinian officials and religious leaders from across the political spectrum continue to incite violence and encourage more terrorist attacks against Jews, while Israel endures more stabbing and rock attacks. 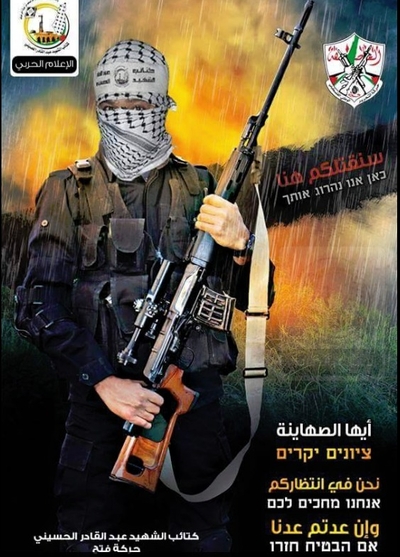 Fatah – the West Bank's ruling party – featured a picture on its official Facebook page Thursday showing an armed and masked terrorist with text that threatened Israelis with future attacks.

"We will kill you here, Oh Zionists. We are awaiting you. If you come back, we will come back," reads the Fatah statement in both Hebrew and Arabic, according to an Investigative Project on Terrorism (IPT) translation.

Meanwhile, an unidentified Gaza-based cleric wielded a knife during a sermon, calling for Palestinians to continue stabbing attacks against Israeli civilians. 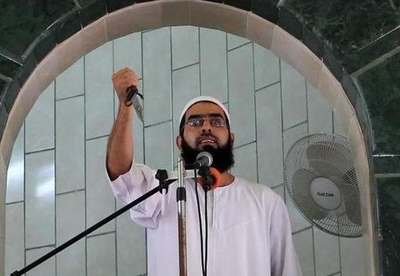 In light of ongoing incitement, Palestinian stabbing and rock-throwing attacks continued throughout Israel on Friday.

Minutes later, another Palestinian tried to steal an Israeli police officer's rifle before being shot by other officers.

A female Palestinian terrorist tried to stab a security guard at Afula's central bus station. After refusing calls to drop the knife, the terrorist was shot and seriously wounded.

This past week, Fatah and Palestinian Liberation Organization (PLO) officials openly justified and called for more attacks against Jews.

When asked whether the murderers of Eitan and Na'ama Henkin – killed in front of their four young children last week – were from Hamas or Fatah's Al-Aqsa Martyrs' Brigades, a PLO executive committee member dismissed the importance of the distinction since killing Israelis is a "national duty."

"There is no need to return to the argument and dispute about who carried out the operation... There is no need to announce it and boast of having done it. One fulfills his national duty voluntarily, as best as one can," said senior PLO official Mahmoud Ismail on Official PA TV on Monday in remarks translated by Palestinian Media Watch (PMW).

On Thursday, multiple stabbing attacks occurred throughout Israel – including in Kiryat Arba, Tel Aviv, and Jerusalem.

While senior Fatah officials call for more attacks, Palestinian Authority President and Fatah member Mahmoud Abbas has yet to publicly condemn any of the attacks that have taken place in recent weeks.

In a area as small as Israel where it must be easy to locate all the Fatah leaders why not have the IDF raid their homes, including that of Abbas, bring them in and hold them under arrest until they instruct their people to behave themselves. Failing that, try them and put them away for life.