Several tweets from an Islamic State follower identifying himself as Abu Mohammed al-Khorasani hint that the terror group could be plotting new attacks inside the U.S. on the upcoming anniversary of 9/11.

A tweet featuring the Twitter hashtags ILLINOIS#, #11septmber and #KillAllAmericans went out at 12:04 p.m. Monday Aug. 31 saying, "Peace on the P.K. [a kind Russian machine gun] Its shots are thematic (rhymes) It strikes America. Our State is victorious." A photo of the second airliner just before it hit the South Tower of the World Trade Center on Sept. 11, 2001 appeared in the tweet.

Six minutes later, al-Khorasani tweeted the same hashtags together with a muddled Arabic phrase saying, "If you say to me, Dushka (a kind of Russian machine gun) Oh God, You have a petitioner (Masha, rhymes with Dushka) He strikes America [sic] and our State is victorious." A graphic saying, "every American citizen is a legitimate target for us," followed the text.

On Sunday, al-Khorasani wrote a similar threat, saying "SOON," accompanied by an image of Osama Bin Laden and images of the Sept. 11 hijackers. 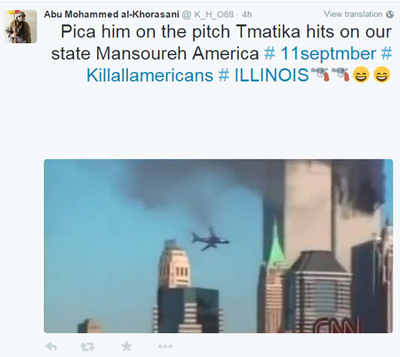 He showed his affection for Bin Laden in a tweet today, taunting Americans, "When you killed Sheikh Osama thrown his pure body in the sea for fear of Dead But U did not know that we have millions of #Sheikh Osama."

Talk and images of what appeared to be a suicide vest or vests immediately followed the threats which included the #ISIS and #IslamicState hashtags.

These tweets follow a summer of Islamic State followers posting images of the Statue of Liberty in ruins, with New York in flames in the background, and saying, "Coming Soon." Additionally, the image depicting the aftermath of an attack on an American city has not been isolated to New York. One such image tweeted from an Islamic State account on July 28 addressed to Lone Wolves showed a masked jihadist running from an explosion in an unnamed American city. 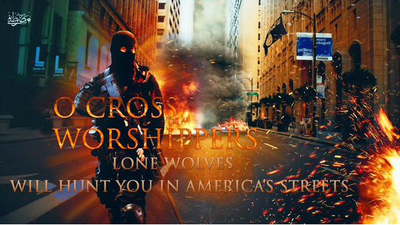 A statement ominously saying, "O Cross Worshipers Lone Wolves Will Hunt You In America's Streets" overlaid the graphic. Another tweet by Islamic State supporter nightwalker/lonewolfe posted Aug. 21 depicted jihadists in Times Square with the script, "We Are Everywhere."

In April, the New York Post reported that Islamic State supporters released a video threatening to unleash a new September 11-style attack, saying that the group's fighters are stronger than those who brought down the Twin Towers."Thus they are able to burn United States again," the video said.

One thing is clear, Islamic State supporters want to remind Americans the group wants to strike against Americans on their own soil at a time and place of the terrorists' choosing.

Americans have armed themselves, aware that the ursurper in our wh is an enemy of America and a friend to evil islam. If God will's it, islam will fall under the hands of Americans, according to his will. Continue as you are America, armed, alert and calm.