The Taliban reached out to Islamic State (IS) leader Abu Bakr Al-Baghdadi calling for unity between the two jihadist factions, a letter posted online Tuesday by a Taliban supporter shows. IS victories have translated into increasing appeal for its brand even in Afghanistan where the Taliban has been the leading jihadist group for the past two decades.

Taliban leader Mullah Omar refused to recognize Al-Baghdadi's caliphate after he announced its formation last year, but this letter likely comes as a result of Omar's realization that the Islamic State poses a threat to the Taliban.

IS established a base in southern Afghanistan under the leadership of former Guantanamo Bay detainee Mullah Abdul Rauf and promised good wages for anyone willing to fight on behalf of IS.

IS fighters have engaged in their trademark brutality in Afghanistan since the terrorist group announced the establishment of its Khorasan province in January. An April 18 suicide bombing by IS terrorists at a bank in Jalalabad left 35 dead, including several children, and wounded 125. Taliban spokesman Zabihullah Mujahid condemned the attack, calling it "an evil act."

Disenchanted Taliban members and other jihadist groups have been seduced into joining IS by the latter's slick online propaganda. IS also has attracted foreign jihadists from Pakistan, Uzbekistan, Tajikistan, and Caucasus to its Afghan fight. Local Afghan officials say these fighters are even more brutal than the Taliban.

"Until now the Islamic Emirate has successfully eliminated all Fitnas (temptations) of disputes, conflicts and division by having unity," Mullah Omar's deputy Alhaj Mullah Akhtar Mohammad Mansoor wrote, suggesting that IS was dividing the forces of jihad in Afghanistan.

He added that "...unity of lines is a need, necessity and obligation, [e]specially when we are in war with American crusader Kuffar (Unbelievers). Therefore Jihad in Afghanistan against Occupier American Kuffar and Allies should be under [a] single banner and [a] single leadership."

Mansoor called on Al-Baghdadi to get into direct contact with Taliban leaders to resolve their disputes rather than rely on rumors passed along by sources with an ax to grind against the Taliban. He referred to Al-Baghdadi as a "brother in Islam," noting that the Taliban had not interfered in IS affairs and that Osama bin Laden had recognized the authority of the Taliban's emirate.

"We hope the same from you and [wish] you only goodness from your side due to our brotherhood relationship of Islam," Mansoor wrote.

Al-Baghdadi reportedly holds a dim view of Mullah Omar and referred to him as "a fool and illiterate warlord" who "does not deserve spiritual or political credibility."

IS-related Twitter accounts accuse the Taliban of being "apostates" under Pakistani control. Accusing fellow Muslims of apostasy is tantamount to saying they should be killed. 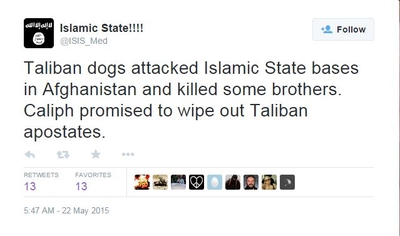 IS follower @ISIS_Med tweeted on May 22, "Taliban dogs attacked Islamic State bases in Afghanistan and killed some brothers. Caliph promised to wipe out Taliban apostates."

This letter shows the Taliban takes this threat seriously amid the rising popularity of IS among jihadists.