British MP George Galloway, friend to Hamas in Gaza, Saddam Hussein and Bashar al-Assad and other dictators, lost his bid for re-election to Parliament representing Bradford West Thursday by a 2-1 margin.

During the campaign, Shah told of her roots in poverty and domestic violence, including an abandoning father, an abusive step-father, and a forced marriage as a teenager in Pakistan. Galloway thought it was a good idea to challenge Shah's story and call her a liar.

While he congratulated the Labour party on winning the seat, he seemed more peeved by "others who are already celebrating: the venal, the vile, the racists and the Zionists will all be celebrating."

Judging by social media reactions, people of all stripes seem to be rejoicing at Galloway's humiliating loss. 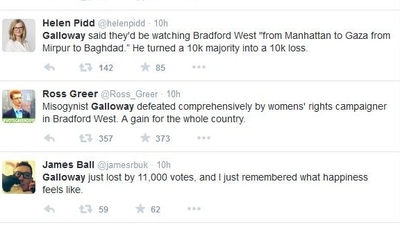 Galloway promised we haven't seen the last of him:

"The hyena can bounce on the lion's grave but it can never be a lion and in any case, I'm not in my grave. As a matter of fact I'm going off now to plan the next campaign."

That's likely true. Galloway previously represented Bethnal Green in Parliament before losing badly in 2010. He then won the Bradford West seat in 2012.

Be carefull of the rocks you throw

Mr. Freese: We are fighting a religious war, and like all zealots, you have to start quoting how much better it would be if the Muslim paid attention to the words of your God. I am sure that this will throw water on the fire-you know-"Our God is better than your God."

To call the enemy a" Godless Provacatuer " does not follow the teachings of Jesus either-which means that you are just as hypocritical as the person you are accusing.

Mr. Galloway has the right to vent his animus now. God's grace gives all of us the freedom to either listen to our conscience or follow our vain imagination. Geo, actually "hates" folks and according to Jesus Christ, that is the same as murder. Pray for the old guy and do not return his standard of hate for hate. After all, the only thing worse than being a fool is not realizing your a fool...