Charlie Hebdo: Martyrs for the Truth 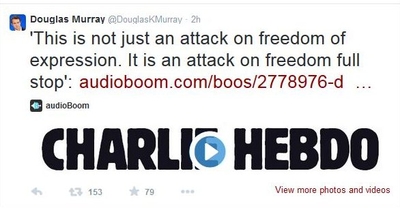 With the massacre of Charlie Hebdo magazine's editors and cartoonists in Paris by Islamic gunmen early Wednesday afternoon, the forces of radical Islam lay the gauntlet down: radical Islam is not just fighting against Western freedom, or the hegemony of Western powers. Their real enemy is truth.

The killing of the Charlie Hebdo staff was not the first time Islamists have made a point of murdering journalists or commentators, or the first time they have risen up against satirists in the West. The record is rich with them: the slaughter in broad daylight of Theo van Gogh on the streets of Amsterdam in November, 2004; the many attempts on the life of Kurt Westergaard, the Danish cartoonist responsible for the drawings of Mohammed with a bomb in his turban; the plot to kill Swedish cartoonist Lars Viks, for similar drawings; the kidnap and murder of American journalist Steven Vincent in response to his New York Times article exposing corruption in the Basra police force in 2005; the beheadings of James Foley and Steven Sotloff in 2014; and the 2011 bombing of the Charlie Hebdo offices in response to the magazine's own publication of cartoons about Mohammed. Among others.

(And that doesn't even address the strong-arming and censorship of Muslim countries – even "democratic" Turkey, which, under the iron hand of Islamist president (and former prime minister) Recep Tayyip Erdogan, has been condemned internationally for its imprisonment of journalists. Indeed, on a list of 170 countries graded on press freedom, Turkey, Pakistan, Egypt, and Saudi Arabi 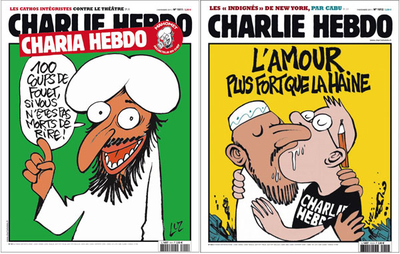 But what is most terrifying about the Charlie Hebdo massacre is the fact that we can no longer hide behind excuses about "lone wolf" terrorists who are "unbalanced" or "disturbed." Such descriptions are the way in which both media and public officials have attempted to minimize the impulses behind attacks such as the one in Fort Hood in 2009, or the attempts to behead two police officers in the streets of New York. What today's events in Paris make clear is that this is not the work of individual crazies, and that Islam is, in fact, a part of the equation.

It's time to stop pretending otherwise.

Let's be clear: the killers announced after their rampage that "this was vengeance for the Prophet Mohammed." Some witnesses claim that at least one of the men cried "Allahu Akbar," ("Allah is great"), the rallying cry of Islamic terrorists. And while many Muslim organizations condemned the attack, other Muslims have taken to Facebook and other social media to praise them.

The weapons may not be new, but the frontier Muslim extremists are fighting on – the destruction of the media, of truth – is one we have not paid enough attention to before.

In many cases, we've perhaps contributed to it: most American and other Western publications refused to republish the Danish Mohammed cartoons after they first set off international rioting among Muslims. And even the Bush administration spoke out against them, saying "We find them offensive, and we certainly understand why Muslims would find these images offensive."

"[W]e have questions about the judgment of publishing something like this. We know that these images will be deeply offensive to many and have the potential to be inflammatory. But we've spoken repeatedly about the importance of upholding the freedom of expression that is enshrined in our Constitution," Carney said.
"In other words, we don't question the right of something like this to be published; we just question the judgment behind the decision to publish it. And I think that that's our view about the video that was produced in this country and has caused so much offense in the Muslim world."

Perhaps in this, Charlie Hebdo was way ahead of the rest of us: they, along with the editors of the Danish Jyllands Posten, which first published the "Mohammed cartoons," have been fighting back from the very start. Shockingly, even Western commentators (and especially Western Muslims) condemned the cartoonists in Denmark, just as they condemned Theo van Gogh and, today, Charlie Hebdo for "inviting" these attacks through their "recklessness."

Nothing Charlie Hebdo ever did was "reckless," any more than Steven Vincent's reporting was reckless, any more than Theo van Gogh's film Submission, about honor killings and the abuse of women in Islam, was reckless. In Charlie Hebdo's case, it was about satire on the face of it – but more than that, their work was about the very urgent need to preserve free expression, and to condemn – in any and all ways possible – those who seek to destroy it.

In the memory of those who died for truth and freedom, we cannot give up that fight – and we cannot afford to lose it.

We need to start digging into our history on America and the world's destruction due to Shariah/Islamic law, the Koran and the Laws of their prophet.

For example, did George Washington want to destroy Islam when he wrote:
"Some of the late treaties which have been entered into, and particularly that between the King of Prussia and the Ud. States, seem to constitute a new era in negotiation, and to promise the happy consequences I have just now been mentioning. But let me ask you my Dr. Marquis, in such an enlightened, in such a liberal age, how is it possible the great maritime powers of Europe should submit to pay an annual tribute to the little piratical States of Barbary? Would to Heaven we had a navy able to reform those enemies to mankind, or crush them into non-existence."
Letter to Marquis de LaFayette
George Washington

Our Founding Fathers thought about the Koran and Islam

If you would like to read what our Founding Fathers thought about the Koran and Islam, go online and type in your search engine: "John Adams Koran, 1806, Alcoran of Mahomet" or you can go directly to this link: http://archive.org/details/korancommonlycal00john and you will come to John Adams Koran published in 1806.

Look to the upper left side of the first page and you will see a blinking icon, "View the Book", right below it you will find, "Read it Online", link to it and read the 2nd & 3rd pages. It will tell you what they thought of the Koran and it is not what the Islamists and media pundits tell us today!

Where is the blood? The Kalashnikoff would have blown the head off of the supposed victim lying on the sidewalk but not only is there no blood splatter AT ALL, there is a puff of smoke about 3 feet to the right of the victim as the masked gunman walks by.

I have NO DOUBT that the threat of radical Islam is real. This looks to me however to be a staged event to get the gullible masses willing to give up even more freedom in the name of "protection."

It is time we face the hard facts...

It is time the West faces facts - Islam is waging war on our whole way of life and will not rest until it institutes Sharia law across the globe. Unless we face the facts and back them up by action, if not we, then our children will have to live in a Muslim dominated world. This is an assault on civilisation and freedom of no lesser magnitute than Hitler's Third Reich was!

I hope every counter-jihad blog will affix Charlie's logo (Je suis Charlie -I am Charlie) to their sites.