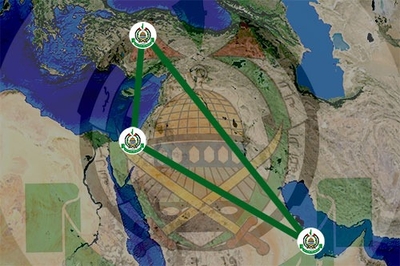 In recent years, the Palestinian terrorist organization Hamas has developed into a truly international entity. Today, it enjoys three territorial bases of operation: Gaza, the seat of the Hamas regime, Turkey, and Qatar.

According to Israeli intelligence estimates, each base serves a different purpose. The three branches have worked, alternatively, in harmony and in discord, together and independently, in line with the various terrorist activities they pursue.

"These are not the same leaderships," one security source said, speaking of the Hamas command structure in each base.

"Qatar is home to Hamas's political branch, headed by Khaled Meshaal. In Turkey [in the city of Istanbul], Hamas maintains a military branch headquarters, which sets up terrorist infrastructure. This headquarters is comprised partly of former Hamas prisoners who were ejected from Israel during the [2011] Gilad Shalit prisoner exchange. In Gaza, there are both military and political operatives."

Each branch plays a unique role, and relations between them fluctuate.

Hamas's headquarters in Istanbul is headed by Salah Al-Arouri, a senior figure in the military wing who is focused on rejuvenating Hamas terrorism cells in the West Bank, and using it as a springboard for orchestrating deadly attacks against Israel.

Gaza is home to the main military wing, the Ezzedin Al-Qassam Brigades, whose operatives focus on building up their offensive rocket capabilities, tunnel networks, and, like Arouri, they also seek to also set up West Bank terrorism cells.

On Thursday, Hamas held what is described as its largest military exercise since the summer war against Israel.

"They all have their own interests. Those in Gaza have one point of view, those abroad have another. There have, in the past, been disagreements," the source said.

One example of such internal conflict was the dispute between Khaled Meshaal and Hamas in Gaza over when to end the summer war with Israel. Meshaal pushed Hamas to continue the fighting, despite growing calls by Hamas in Gaza to agree to a ceasefire. The conflicting positions were partly the result of geography: Hamas in Gaza had a better real time understanding of the heavy costs Israel was inflicting on it during the fighting than the overseas Meshaal, who, from his luxurious Qatari surroundings, could afford the privilege of calling for more fighting.

Nevertheless, a basic level of cooperation and consent exists among all three branches. Saleh Al-Arouri in Turkey would not have embarked on a major mission to set up a large-scale Hamas terrorist network in the West Bank, plan atrocities against Israel, and aim to topple the Palestinian Authority and its president, Mahmoud Abbas, without approval from Khaled Meshaal and Hamas in Gaza.

Cooperation may not always be close, but it exists.

"There are connections," the security source said. "Hamas in Gaza is connected to those trying to orchestrate terrorism in Judea and Samaria. There is a circle of cooperation."

Arouri could seek and receive assistance from Gaza, as he has done, but he can also try to work independently. "There are no laws," the source stressed.

In recent months, the Shin Bet [Israel Security Agency] uncovered two intricate Hamas terror plots to inflict mass-casualty attacks on Israelis, and to weaken Fatah in the West Bank. Both were tied to Arouri.

This discovery has led Israeli defense chiefs to become more vocal about the Hamas base in Turkey.

"Hamas's terrorism headquarters are in Gaza and in Istanbul. It is unbelievable that a NATO member is hosting the headquarters of a terrorist organization in its territory," Defense Minister Moshe Ya'alon told his Spanish counterpart earlier this month.

"We have stopped a coup planned by Hamas, which was organized in, among other places, its Turkish headquarters, against [PA President Mahmoud Abbas] Abu Mazen in Judea and Samaria. We saved him from this revolution. Hence, there is much significance and importance in our having freedom to operate security-wise in Judea and Samaria," Ya'alon stated.

Likewise, at the end of November, the Shin Bet and IDF announced that they had broken up a large-scale international Hamas terrorist infrastructure that was in the planning stages of multiple mass-casualty attacks, including an intended bombing of a soccer stadium in Jerusalem.

This case illustrates the growing centrality of Istanbul to Hamas terror activities in the West Bank. Hamas's headquarters in Turkey has become a key command and planning center.

Earlier this year, the Shin Bet announced the thwarting of another large Hamas network in the West Bank, set up by Saleh Al-Arouri in Istanbul, and headed locally by a Hamas member in Ramallah.

Hamas funneled more than a million shekels [more than $250,000] to terror operatives to prepare a series of attacks, which were designed to allow it to shift attention away from Gaza, and ultimately lead to the fall of the Fatah-run Palestinian Authority, according to Israeli investigation. This would be achieved by provoking Israel into harsh responses in the West Bank, destabilizing the area and leading to the toppling of the PA.

Hamas has come a long way since the days when its founders, Muslim Brotherhood operatives in the Palestinian territories, set up indoctrination and social support centers.

Today, it is an international terrorist organization, which continues to plot new ways to murder and maim Israelis from its various bases, while it dreams of setting up a second Islamist-jihadist regime in the West Bank, as it did in Gaza.