Al-Hayat Media, an important part of the Islamic State's propaganda machine, released the third issue of its English-language jihadist publication Dabiq Friday. It released its first two editions of the magazine written in the style of Al-Qaida in the Arabian Peninsula's Inspire magazine earlier in August. 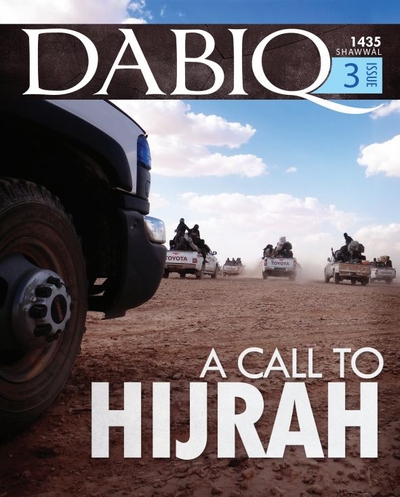 A recent article in the New Republic compared the first two editions of Dabiq with Inspire, saying the new magazine provided a more "comprehensive attempt to recruit westerners" than its Al-Qaida predecessor.

The cover, "A Call to Hijrah," recalls the Muslim Prophet Muhammad's journey from Mecca to Medina and reads like a glossy recruiting guide.

It sets up the United States as the boogeyman all Muslims must fight because Americans killed thousands of Muslims during their occupation of Iraq, calling their deaths "collateral damage."

Dabiq gloats over James Foley's beheading, calling it "a cooling balm for the believers' hearts" that served "as a retribution for the recent American aggression against the Muslims of Iraq."

It claims that the Obama administration was "dragging its feet" its feet for nine months trying to save Foley's life and those of other American and British hostages held in the Islamic State's dungeons. In the new issue, the Islamic State (also known as ISIS, or ISIL) again raises the administration's refusal to release Aafia Siddiqui, who is serving an 86-year sentence for attempting to murder Americans in Afghanistan and plotting 'mass-casualty' attacks in New York.

Obama acts "more foolishly" than Bush on matters of foreign policy in the Middle East, the magazine says, and calls him an "apostate."

The magazine also provides religious justification for Muslims living in the West to leave their countries and join the fight, depicting a Muslim society free from nationalism and where they can live in full accord with Islamic law and morality. It also uses guilt against Muslims who refuse to follow the Islamic State.

"So abandoning hijrah (migration to the Islamic State) – the path to jihad – is a dangerous matter. In effect, one is thereby deserting jihad and willingly becoming a hypocritical spectator," the magazine said, criticizing Muslims in the West who live like their non-Muslim neighbors. "… [N]ow there is a Khalifah (Caliphate) prepared to accept every Muslim and Muslimah into lands and all it can within its power to protect them alone."

The "life of jihad" it says is only possible if Muslims move to the Islamic State's caliphate."

We need to be grateful for the positive aspects of ISIS calling all kindred souls to join them. It will rid the free world of malcontents who may have become dangerous in their own communities and who now have a 50-50 chance of getting killed. If the world wakes up to reason they will be killed if and when they try to return to their original countries. Thus ISIS can be looked upon as a big magnet that pulls out of the world's societies unwanted trash. Concurrently, the outrageous acts by ISIS can no longer be overlooked by mass media as they have been covering up for so many of Islam's inhuman behavior and this will wake up the sleeping dolts who can be categorized as lefties, peacenicks and generally useless idiots.