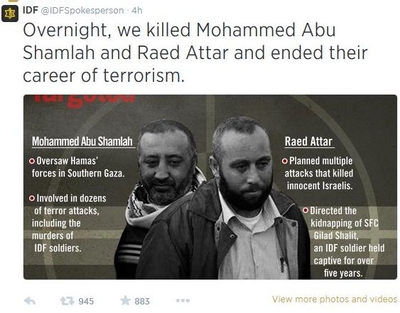 As the most senior Hamas leader in southern Gaza, Shamalah, 39, oversaw terrorist operations in all of Rafah and Khan Younis and was directly involved in planning and conducting dozens of attacks on Israel. He was also one of the main masterminds behind the Kerem Shalom tunnel attack in 2006, which led to the deaths of two IDF soldiers and the kidnapping of Gilad Schalit. During the current escalation, he facilitated the infiltration of 13 Hamas terrorists into Israel through an underground tunnel.

Ra'ad Attar, 39, formerly a senior member of Hamas' military wing, was responsible for establishing Hamas' tunnel network in south Gaza. He also served as a commander of terrorist operations in his region and participated in numerous deadly attacks and bombings on Israeli soldiers. Both Shamalah and al-Attar have ties with terrorist groups operating in Egypt and are connected to the killing of 16 Egyptian soldiers in the Sinai Peninsula two years ago.

"This strike represents a very significant intelligence achievement, and an intelligence infiltration," a security source told the Jerusalem Post.

Israel's longstanding policy of targeted killing tries to eliminate senior terrorist leaders and highly skilled members. It forces other leaders deeper into hiding and inhibits them from planning and conducting terrorist attacks as freely. This latest string of targeted killings has sent shockwaves among other Hamas leaders who fear Israeli intelligence infiltration within their inner circles, breading increasing mistrust that may inhibit coherent coordination at the senior most levels.

In response, Hamas rounded up suspected "collaborators," reportedly executing at least three of them within hours.

Israel also expects Hamas to launch a series of desperate attacks to answer the successful removal of key Hamas operatives.

"In the next few days," writes Times of Israel analyst Avi Issacharoff, "Hamas will try to use every military means at its disposal: the rockets it has saved for a 'moment of truth,' any of its cross-border attack tunnels that may remain, West Bank suicide bombers — anything to prove to Israel that Hamas has not been defeated and is still standing."

More than 300 rockets have been fired at Israel from Gaza after Hamas broke the latest ceasefire on Tuesday. The IAF responded by targeting roughly 100 terrorist targets across Gaza, including rocket launch pads, command and control infrastructure, and terrorists firing missiles into Israeli population centers.

From a PR standpoint, it works against Israel when they talk about such assassinations. It changes the level of the conflict from what the public has been conditioned to understand in war, the killing of great numbers, which, ironically, is acceptable to the mass, to murder, the killing of individuals which is not acceptable. Israel should not have said a word about this and not commented on it if Hamas announced these killings. The whole operation would have been far more effective from a strategic, tactical and PR standpoint if the IAF had carpet bombed all of Gaza continuously for 48 hours, wiping out everything. It would have been over and done with. The world might have screamed loudly for a few days and the PR damage would have been minimal. Also there would have been no loss of life among the IDF. By dragging it out with intermittent, cease-fire palavers, it becomes a PR nightmare and the objective of getting rid of Hamas fails to be achieved.