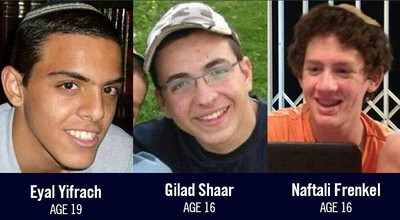 Israel is in a state of national mourning Monday after troops found the bodies of three teenagers last seen near a school near Hebron two weeks ago.

Eyal Yifrach, 19, and 16 year-olds Naftali Frenkel and Gilad Shaar were discovered in a field after more than two weeks of intense search efforts.

Israel's security cabinet is meeting this evening and an aggressive reaction is expected to follow. Prime Minister Benjamin Netanyahu promised that Hamas will pay for the murders.

Two Hamas members from Hebron, Marwan Kawasme and Amar Abu Issa, are considered the prime suspects. Neither has been seen since the boys disappeared while hitchhiking June 12. Hamas continues to describe the boys falsely as soldiers. They were Yeshiva students. Frenkel also is an American citizen.

Many Palestinians celebrated the kidnappings, with editorial cartoons in Palestinian newspapers mocking them and people posed with three fingers held up as a salute.

It's likely they were killed almost immediately.

Police heard gunshots as one of the boys called police during the attack and a burned out car found nearby "had clear evidence of foul play," Buzzfeed reports. The government imposed a gag order on such details, and they clung to any hope of finding the boys alive.

"We have been operating, for some time now, with evidence that these boys were killed," an unnamed official told the site. "It is with a heavy heart that we realized we were looking for bodies."

The Times of Israel reports on how what started out as a kidnapping may have quickly turned to murder.