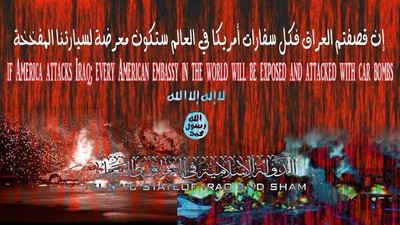 Supporters of the Islamic State of Iraq and Syria (ISIS) have launched a viral propaganda campaign on Twitter threatening to attack the United States and its interests if America acts militarily against the group in Iraq.

These threats have been delivered through messages on ISIS's #CalamityWillBefallUS hashtag and feature images of the 9/11 attacks; dead American soldiers; the body of slain U.S. Ambassador to Libya Christopher Stevens; a threatening message from Anwar al-Awlaki, the late leader of Al-Qaida in the Arabian Peninsula (AQAP); and the Nick Berg beheading video among others.

"We will kill your people and transform America to a river of blood :)!" a poster tweeting under the name "Miqdad remain #" said in a post on the #CalamityWillBefallUS hashtag.

The threats are posted in English as well as in Arabic. For example, the ISIS-linked Al-Battar Media Foundation sent out a tweet Wednesday night telling supporters that "Tweeting in English is preferred" in a Twitter campaign that it plans for Friday that it is calling a "Warning to American People."

The United States has sent military advisers to Iraq. There is talk of possible airstrikes, but Secretary of State John Kerry seemed to rule them out in the near term. Bombing now "would be a complete and total act of irresponsibility," Kerry said, because of Iraq's political environment, which offers "nothing there that provides the capacity for success."

In a separate interview, Kerry dismissed ISIS's threats, saying the group did not yet have the capability to carry them out.

ISIS's Twitter intimidation campaign, therefore, may be a combination of recruiting propaganda and an attempt to drive public support down for any future American strikes.

ISIS says it will target every American embassy around the world with car bombs should the U.S. attack Iraq, according to an image posted by a user @BZEAA.

"... EACH and EVERY #American is targeted, whether he lives in or outside the #US! …," the Al-Battar Media Foundation warned Wednesday. The foundation also warned of a pending 9/11-style attack, saying it would happen in an "UNEXPECTED PLACE."

Mohamed al-Jizrawi, an ISIS supporter with 2,000 Twitter followers, similarly warned that U.S. embassies, interests and citizens around the world would be targeted should the Obama administration increase American military involvement in Iraq.

Additionally, threats have been leveled against companies in the Arab world, stating they will be a "legitimate target for every Muslim" if they employ Americans.

Likewise, American doctors have also been threatened with a message bearing ISIS's logo stating, "Every American doctor working in any country will be slaughtered if America attack (sic) Iraq."

Besides threatening the United States, ISIS uses social media to find recruits and provide instant reports about its battlefield maneuvers. A slickly produced recruitment video tweeted by ISIS members last week telling Western Muslims to join their jihad exemplifies the terror group's social-media strategy. Thousands of Western Muslims already have answered the call – many of whom are fighting for ISIS.

Combating ISIS's use of social media is a bit like playing whack-a-mole because the terrorists replace closed social-media portals with new ones as soon as the old ones are closed.

One thing is for sure, ISIS's use of social-media means jihadist propaganda has come out of the shadows and into the public eye.

John Kerry is a fool to dismiss ISIS's threats! Their threats against America and the world are real even if they never are able to fulfill them! I checked out #CalamityWillBefallUS from my personal Twitter account to access every person or group that uses this hashtag. Amazing info there with so much hatred and graphic videos! I found #ISISNEWS that said basically what all of the others are saying -- if America tries to stop ISIS, they will come for us. Many are calling American Muslims to join with ISIS to wake up and destroy America. Americans WAKE UP. What Steven Emerson and the IPT have been warning us since 1993 is here, it's at the door!! We have an enemy that is fierce and its name is Islam... GOD help us!

I doubt that ISIS understands that the US population is one of the most heavily armed countries in the world. We don't have to depend on the military to protect us. We also have tough cops working in all of our cities that will shoot you if they think you are a danger to the public. All a flight attendant on all of the airlines has to do is yell for help to corral a unruly passenger and the person wakes up after they are knocked cold by several male passengers tied up in their seat until the plane lands. They had better rethink their bragging.