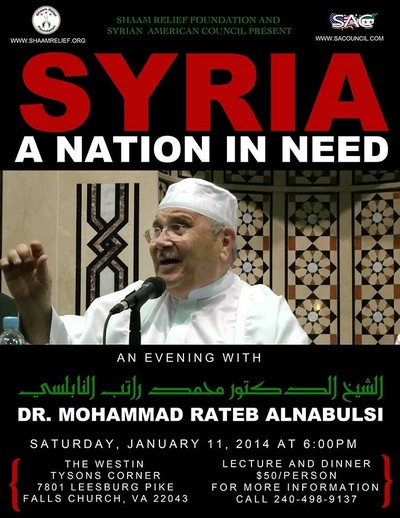 A Syrian sheik who labeled all Jews as legitimate targets for suicide bombers and who supports the death penalty for homosexuals is the latest extremist Muslim cleric raising money for Syrian-American groups supporting dictator Bashar al-Assad's ouster.

Sheik Mohammad Rateb al-Nabulsi is in the middle of an 11-city tour across America on co-sponsored by the Syrian American Council (SAC) and the Wylie, Texas-based Shaam Relief.

A promotional announcement hails al-Nabulsi as "an internationally-known Muslim scholar, renowned for his scholarship of Islam, who has lent his formidable clerical authority to support human rights, tolerance and respect for all."

But tolerance is not part of his preaching when it comes to perceived enemies.

Asked about Palestinian suicide bombings in April 2001, al-Nabulsi said he was "too insignificant to give a Sharia ruling or fatwa." Instead, he extensively cited from two previous fatwas from radical clerics which bless such attacks.

"All the Jewish people are combatants" acceptable as targets for attacks in Israel, al-Nabulsi wrote in his "ruling on martyrdom operations in Palestine."

"They do not have a career that a military rank does not encounter: doctor, pilot, engineer, for example, is a tank commander. Every civilian, citizen," he wrote. "They do not have a regular army; they have a reserve army, and all the people can fight, so this is essentially an entirely aggressive entity from A to Z. This is the Sharia ruling."

Al-Nabulsi's comments on suicide bombings remain on his website.

Suicide bombings are acceptable because of the overwhelming disadvantage Palestinians have in fighting Israel, he said. And they are effective.

Muslims, that this is suicide, but we should call them martyrdom operations. A young man in the prime of his years sacrifices his life and shakes an entity," he wrote. "There is frightening talk. Soon tourism in Israel has become zero; soon immigration to Israel became thirty percent from the impact of these actions. It fell thirty percent. The real fact us that it began now. By God Almighty it was proven to them, It gives victory over them, and inspires us to help them in any way."

He called Jews the "worst enemies of God" and Islam and "a hotbed of vices and evils."

The scope of his fatwa is limited to Israel. But it is not his only call to violence. Al-Nabulsi believes that Muslims should violently fight those who "impose their culture … and pornography" on them, as well as those who humiliate Muslims, occupy their lands and take their money, an August 2006 sermon shows.

Yet, al-Nabulsi apparently obtained a visa from the State Department allowing him to conduct his fundraising tour. Under current policy, a foreign national applying for a U.S. visa who is known to have promoted jihad and suicide bombings would be ordinarily deemed "undesirable" and denied a visa, government officials who have been involved in deciding who gets a visa from hostile countries told the Investigative Project on Terrorism (IPT).

The State Department declined to comment. "Visa records are confidential under U.S. law under the Immigration and Nationality Act," State Department spokeswoman Katherine Pfaff said in response to an IPT query. 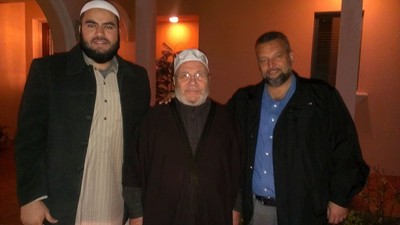 In Tampa, al-Nabulsi posed for a photograph with Hatem Fariz. In 2006, Fariz pleaded guilty to conspiring to provide goods or services to the Palestinian Islamic Jihad. In doing so, he admitted communicating with Ramadan Shallah, who has been the PIJ secretary general since 1995, about a shipment of tapes of Shallah's statements about the PIJ.

In Paterson Thursday, al-Nabulsi spoke at the Islamic Center of Passaic County. That mosque is led by Mohamed Qatanani, who is fighting deportation efforts based on a 1993 arrest in Israel in which he admitted being a member of Hamas. In addition, Qatanani advocates for blasphemy laws, saying free speech does not give Americans the right to mock things holy to Islam.

Al-Nabulsi will be making two stops in the Detroit area this coming weekend before concluding his tour Jan. 25 in Dallas.

In November, a similar fundraising tour featured Sheik Osama al-Rifai, who endorsed a coalition of jihadist groups called the Islamic Front. He helped raise $3.6 million for the Syrian Sunrise Foundation, which shares several board members with the SAC.

The SAC is one of the major groups lobbying in Washington for support against Assad in Syria.

SAC President Talal Sunbulli is among the current or former members of the Muslim Brotherhood who enjoy a role in the organization, according to an international phone book of Muslim Brotherhood members seized by federal investigators. Hussam Ayloush, who runs the Council on American-Islamic Relations' (CAIR) Los Angeles office, serves as chairman of the organization's board of directors.

The SAC's leaders have a history of minimizing the radical Islamist threat in Syria.

Its government relations director Mohammed Ghanem criticized the United States for classifying Jabhat al-Nusra, one of al-Qaida's two Syrian affiliates, as a terrorist organization in a December 2012 column published in the Washington Post. Ghanem said the move was "disastrous" for how "mainstream" Syrians viewed the United States.

Jabhat al-Nusra's connection with al-Qaida was known about several months before Ghanem wrote his piece.

Meanwhile, al-Nabulsi's calls for violent jihad are not limited to Jews in Israel. He includes the Western push for same-sex marriage among the things Muslims need to fight in their jihad.

"So as they would not impose their pornography, and so as not to give us a lesson that marriage is a contract between two persons; not necessarily a man and a woman; it may be between two men or two women," he wrote in 2010. The message is followed by a verse from the Quran: "And fight them until there's no more fitnah (disbelief and worshipping of others along with Allah). And (all and every kind of) worship is for Allah (Alone). " [Al-Baqarah : 193]

Al-Nabulsi took his jihad against homosexuals a step further during an April 2011 talk on Hamas's al-Aqsa TV.

"Homosexuality offers a filthy place and does not generate offsprings. Homosexuality leads to the destruction of the homosexual," Al-Nabulsi said. "That's why homosexuality carries the death penalty."

Inviting Nabulsi to speak on behalf of the SAC is ironic considering Ayloush's past statements.

"[I]t is also extremely important to remember that even one person's support for targeting civilians is one too many. Regardless of one's religion or belief system, any support for violence should never go unnoticed or unaddressed," Ayloush wrote in a June 2007 commentary in the Los Angeles Daily News.

Yet Ayloush has been silent about al-Nabulsi's visit on his Facebook page and in his Twitter feed. Ayloush did not respond to an IPT question sent to his Twitter account asking if he had any objections to al-Nabulsi's invitation.

But Ayloush is quick to dismiss anyone who connects Islam with violence and hatred as a bigot or an "Islamophobe."

A Muslim who claims that Islam sanctions bombing innocent civilians was no different than a "KKK member who claims a biblical basis in committing bigoted crimes," Ayloush told a Southern California newspaper after last April's Boston Marathon bombing.

"Islam's teachings are very clear in protecting the sanctity of life," Ayloush said. "Anyone who claims to be a Muslim cannot act in opposition to those teachings."

Ayloush denounced anti-Semitism during the 2009 Gaza War in a column he wrote for the Jewish Journal, saying that Islam condemns "all forms of bigotry."

"Islam not only denounces, in the strongest manner possible, all forms of bigotry," he wrote, "but specifically teaches Muslims to revere and follow all Hebrew prophets who are praised in the Quran."

Ayloush's organization, CAIR, was created by members of a Muslim Brotherhood network in the United States called the Palestine Committee, the committee's own records show. These records were seized by federal investigators and admitted into evidence in 2007 and 2008 during prosecutions of another Palestine Committee branch called the Holy Land Foundation for Relief and Development.

Internal documents seized by the FBI show that CAIR and its founders, Omar Ahmad and Nihad Awad, were a part of the Palestine Committee. Both men appear on a telephone list of Palestine Committee members (Ahmad is listed under a pseudonym "Omar Yehya), and CAIR is listed on a meeting agenda listing the committee's branches.

"[U] ntil we can resolve whether there continues to be a connection between CAIR or its executives and HAMAS," an FBI official wrote in 2009, "the FBI does not view CAIR as an appropriate liaison partner." In a 2009 ruling, the presiding judge wrote that he saw "ample evidence to establish the associations of CAIR ... with Hamas."

Asked to condemn Hamas as recently as November, Ayloush angrily said the very act of asking the question was "not acceptable," and "proves that you have nothing but bigotry in you." In a blog post a year ago, Ayloush offered his view of groups deserving the label "terrorist."

"It is used by Israel to describe Palestinians who oppose its illegal and brutal occupation of their land," he wrote. When it came time to name groups Ayloush accepts as terrorist, no Palestinian entities were included. Instead, he listed "Al Qaeda, Jewish Defense League, KKK, Neo-Nazis, and many others which have engaged in terrorism."

Fateen Atassi, who also heads the group's Chicago chapter, is another SAC board member who has had close relations with CAIR. Atassi appeared at a joint press conference with the CAIR Chicago's Executive Director Ahmed Rehab in August 2012 to protest against the bloodshed in Syria.

Shaam Relief, the other sponsor of al-Nabulsi's tour, has its own radical streak. Director Ghassan Hitto actively supported the defendants during the Holy Land Foundation's Hamas-support trial. Hitto pushed the talking point that HLF's only crime was helping suffering Palestinian children during a July 2007 event in Plano, Texas sponsored by a pro-Holy Land Foundation coalition called the Hungry for Justice Coalition.

Last March the Syrian National Council, the main political arm of the anti-Assad uprising, named Hitto as its interim prime minister. Hitto served in this post until July when he resigned because he could not form an interim government. He was a member of the SAC's board of directors prior to his appointment as prime minister.

The SAC is not alone among Syrian-American groups in working with pro-jihadist clerics. Last month Mouaz Moustafa, who heads the Syrian Emergency Taskforce (SETF), argued that the United States should reach out to the Islamic Front. He called the jihadist coalition the "best hope" for the West to fight al-Qaida in Syria, although some of the Front's leaders have friendly relations with Jabhat al-Nusra.

"They should also be seen as the best hope against al-Qaida and the extremists in Syria and also against Hizballah and Assad," Moustafa said in a podcast. "I think the international community and the West in general must engage with the Islamic Front and need to be more pragmatic and realistic about what is going on ground in Syria in order to bring them on board with whatever political solution will happen in the future."

Inviting al-Nabulsi and al-Rifai, together with Moustafa's favorable statements about the Islamic Front suggest that the leaders of these Syrian-American groups may not be as moderate as they publicly claim.