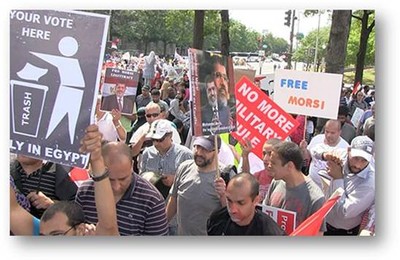 A rally Saturday in Washington supporting deposed Egyptian President Mohamed Morsi, the second in a month sponsored by a group calling itself Egyptian-Americans for Democracy and Human Rights (EADHR), along with its press conference on Friday, makes it harder for some leading American Islamists to deny their connection with the Muslim Brotherhood.

The pro-Morsi demonstrators who packed Freedom Plaza just a block from the White House repeated many of the same chants that have been common in Muslim Brotherhood protests in Egypt since Morsi's fall.

These included chants of "Down with Sisi" and "Morsi is my president," which have been common in Brotherhood demonstrations in Egypt such as one at Al-Azhar University last month. Protesters also chanted, "It's a coup, it's a coup!" and "Long live democracy!" Organizers at the Washington rally played an Arabic song titled, "This is a revolution, not a coup," which has been extremely popular at pro-Morsi rallies in Egypt.

The demonstrators and protest organizers hope to get the Obama administration to follow Sens. John McCain, R-Ariz., and Lindsey Graham, R-S.C., in calling Morsi's ouster a "coup." Thus far, Secretary of State John Kerry and the Obama administration have declined to do so, saying that the military intervened to keep Egypt from devolving into chaos.

Dardery omitted the repressive tactics used against opponents by the Brotherhood during Morsi's year in power and the human-rights abuses that its members have engaged in since Morsi's fall.

These abuses include charging comedian Bassem Youssef with crimes for insulting Morsi and for insulting Islam; torturing opponents; repressing women's rights; widespread voter fraud in the process of ramming the constitution through in December; tolerating the assault on Coptic Christianity's holiest cathedral by Islamic militants in April; and intimidating opponents from voting. Since Morsi's fall, Amnesty International has cited Muslim Brotherhood demonstrators for killing, beating and torturing anti-Morsi rivals. At least eight bodies have shown up at the Cairo morgue bearing signs of torture, and at least five of them were discovered near pro-Morsi sit-ins.

The Muslim Brotherhood's human-rights record did not seem to concern protest organizers during a news conference Friday, when an unidentified Egyptian man asked them about the Brotherhood's torture of its opponents.

"Compare the relationship in Egypt between Muslims and Christians and many other countries in the world, you will find [the] Egyptian model is one of the best models on the face of the earth," Dardery said. "We have a great future for all Egyptians, President Morsi and his government tried to as be as inclusive as possible in a transitionary stage. It's a myth that the Freedom and Justice Party controlled the government."

Publicly admitting connections with the Muslim Brotherhood seems to be the last thing that protest organizers want. This was made plain both at the rally and at the Friday press conference, where EADHR leader Sheikh Shaker Elsayed, who serves as imam of the notorious Dar al-Hijrah Mosque in Falls Church, Va., was quick to deny his connection to the Brotherhood.

The Dar al-Hijrah Mosque, noted for its connection to the 9/11 hijackers and its former imam, Anwar al-Awlaki who was killed by a drone strike in 2011, has been implicated by law enforcement as a front for Hamas, the Palestinian terrorist offshoot of the Muslim Brotherhood. It has also been linked to terrorist financing.

"This is not about the Muslim Brotherhood. It is not even about Dr. Morsi," said Elsayed said in response to an Investigative Project on Terrorism question about Muslim Brotherhood connections. "Dr. Morsi happened to be from the Brotherhood, but it could have been anybody else. If we allow the rule of law to be broken and the democratic rules to be violated, it will happen to anybody and Egypt will never have stability, progress, investment, or a future. So we have nothing to do with your claims."

Elsayed denied his own documented Brotherhood connection, saying that he was part of the Universal Justice Foundation, an organization that defended Ahmed Omar Abu-Ali, who was convicted in June 2008 of being second-in-command of an al-Qaeda cell terrorist cell in Medina, Saudi Arabia.

Last January, Elsayed gave a speech at a northern Virginia high school where he said Muslim men were last in line for everything being distributed "unless it is arms for jihad."

"We are the first to rush and run to defend our community and defend ourselves. The enemies of Allah are lining up; the question for us is, 'Are we lining, or are we afraid because, because they may call us terrorists,'" Elsayed said in the YouTube video of the speech discovered by the Creeping Sharia blog. "You are a terrorist because you are a Muslim. Well give them a run for their money. Make it worth it. Make this title worth it, and be good a Muslim."

Elsayed was mentioned by name in the 1991 "Explanatory Memorandum on the General Strategic Goal for the Group in North America," written by Muslim Brotherhood activist Mohamed Akram. Among its ambitions is a "Civilization-Jihadist Process" aimed at destroying Western civilization from within.

He was not the only person at the press conference with Muslim Brotherhood ties.

EADHR President Hany Saqr (aka Hani Saker) is listed as a leader of the Brotherhood's establishment in North America in a 1992 telephone directory seized by federal investigators from the home of a senior Brotherhood official in Virginia. He was listed as being among the Brotherhood's members of the "Masul (leader) of the Administrative Office for East America."

Despite these documented connections, protest organizers and speakers cast themselves merely as concerned citizens who happen to be Muslim.

"We're in a public square for the purpose of conveying a message to those beyond our ranks, to the American people who have been hearing from ABC and CBS and Fox and CNN about something that has taken place in another part of the world that they feel largely divorced from except when they hear through often prejudiced, very biased commentaries and analysis how what happens in Egypt or in the Sudan or in Algeria or in occupied Palestine affects them," said rally speaker Mauri Saalakhan. "We want to be able to convey a very clear message that counteracts the malicious propaganda that taints quote, unquote 'Islamists,' and I don't like that term, I do not like the term 'Islamist.' We are Muslims, this is what we are. And this is how we should identify ourselves, as Muslims."

But Saalakhan also is an anti-Semitic conspiracy theorist who blames Israel and its supporters for a host of global problems.

The millions who demanded Morsi's ouster and an end to the Muslim Brotherhood's theocratic rule in Egypt are Muslims, too. They were angered by Morsi's mismanagement of Egypt's economy. The Tamarod, or Rebel movement received 22 million signatures demanding that Morsi step down prior to his July 3 ouster. Morsi garnered only 13 million votes in the June 2012 election. According to the International Development Center's Democracy Index, 30 million Egyptians of all stripes took to the streets demanding that Morsi go. Fewer than 1 million people participated in pro-Morsi demonstrations.

Morsi's ouster was also backed by the Sheikh Ahmed al-Tayeb, the grand imam of Al-Azhar, the highest clerical authority in Sunni Islam. A poll found last month found that 71 percent of Egyptians do not want Morsi back.

Morsi had opportunities to meet with his opponents and negotiate a way to stay in office. He refused.

Morsi supporters in the United States have every right to speak out in support of him. And there's no prohibition in American law against being a member of the Muslim Brotherhood.

But candor has never been a part of the Islamist strategy. This was made clear during a 1993 meeting of the Muslim Brotherhood's Palestine Committee at a Philadelphia hotel. FBI recordings of the meeting show that the group, which convened to discuss ways to support Hamas, knew the American public would reject their message if it was presented honestly.

"War is deception," said Shukri Abu Baker, who headed the Holy Land Foundation for Relief and Development. The charity posed as a Muslim humanitarian concern which gave money and supplies to needy widows and orphans. In reality, it illegally funneled millions of dollars to Hamas.

"War is deception. Deceive, camouflage, pretend that you're leaving while you're walking that way ... Deceive your enemy."

Saturday's rally was organized by individuals and groups with Muslim Brotherhood ties. It sought the restoration of a government dominated by Brotherhood members who were working to consolidate power.

None of the flowery talk about democracy changes that reality.

I would hope those supporting Morsi are returning to Egypt to help him. Most importantly leaving the US.

Which helps underline the lies of Ibrahim El Hudaiby, MB spokesman, when he spoke to a class at UC Irvine in 2008. When I presented him copies (in English and Arabic) of the Explanatory memorandum, he called it a forgery and insisted that the MB had no connections in the US.