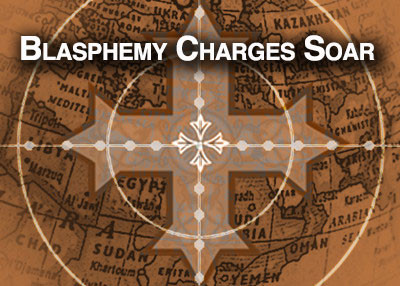 Post "Arab Spring" Egypt continues exposing its true nature, including now legal persecution of Christians. Earlier this month, according to Fox News, Dimyana Abdel-Nour a "pale, young Christian woman sat handcuffed in the courtroom, accused of insulting Islam while teaching history of religions to fourth-graders." Her accusers are 10-year-old Muslim children who say she "showed disgust when she spoke of Islam in class."

According to Islamic law, the word of inferior Christians cannot stand against that of superior Muslims—even if they are resentful or confused children.

Released on bail, Dimyana is unable to talk and "suffering a nervous breakdown."

Criminalizing blasphemy was enshrined in the country's Islamist-backed constitution that was adopted in December. Writers, activists and even a famous television comedian have been accused of blasphemy since then. But Christians seem to be the favorite target of Islamist prosecutors. Their fragile cases — the main basis of the case against Abdel-Nour's case the testimony of children — are greeted with sympathy from courtroom judges with their own religious bias or who fear the wrath of Islamists, according to activists. The result is a growing number of Egyptians, including many Christians, who have been convicted and sent to prison for blasphemy…. Part of the Salafis' antagonism toward Christians is rooted in the belief that they were a protected group under Mubarak's regime while they, the Salafis, were persecuted. Now empowered, they may be out to exact revenge on the Christians....

Indeed, before President Obama threw Hosni Mubarak under the bus in the name of "freedom" and "democracy," Christians were at least legally protected: Muslim mobs were limited to lawless attacks on Christian churches and persons. But now that the Muslim Brotherhood and Salafis are in charge, Egypt's Christians are now also experiencing legal persecution in the courtrooms, especially in the context of blasphemy.

The following cases of blasphemy laws targeting Christians, some of which were never reported in the West, represent a mere sampling of post "Arab Spring" Egypt. For many more such cases, including all around the Muslim world, see my new book Crucified Again: Exposing Islam's New War on Christians (April, 2013, published by Regnery in cooperation with Gatestone Institute.

Human rights activist Magdi Khalil of Coptic Solidarity told me that in all these cases "Islamist prosecutors rely exclusively on circumstantial evidence. And the judges do not behave like impartial judges, but rather as demagogues haranguing an already frenzied mob, and then sacrificing the Copts to satisfy them. Nor do they allow any representation for the accused. Judges just show up and pass their verdicts in very brief mock trials."

Such is the new Egypt that Obama helped create—despite all the glaring warning signs that it would develop just like this. Christian persecution in Egypt has gone from being a common, though technically illegal, phenomenon, to being widespread, and now legal.

Raymond Ibrahim is author of Crucified Again: Exposing Islam's New War on Christians. A Middle East and Islam expert, he is a Shillman Fellow at the David Horowitz Freedom Center and associate fellow at the Middle East Forum.

It is Islamicism, not Islam

Edward that may be so, but the problem with Islamists such as the MB, AQ, Taliban etc is that they do not actually follow Islam - they just pursue domination and control, and just use (an inaccurate representation of ) Islam as a vehicle - the mob then follows through ignorance, fear and hysteria. We had it on the Christian side during the Spanish Inquisition - now the Muslim world has it - but it must be noted, resisted and exposed or we will all be slaves. The primary people who must resist this domination are Musslims themselves.

What does this have to do with Islam

This has nothing to do with true Islam. If you read the Quran this time of insulting wasnt punishable under Quranic law nor did it have any merit during the prophets time. So again....just because a country that happens to have muslims does something crazy doesnt mean its Islam. I find your blog very one sided.