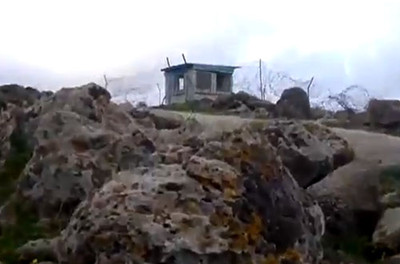 Haifa, Israel – If jihadi groups fighting to topple Syrian dictator Bashar al-Assad succeed, "[i]t's us afterwards," warned Israeli Defense Force (IDF) Chief of Staff Lt. General Benny Gantz during a conference last week. "We could be the next challenge for the same organizations."

The Golan Heights, the border between Syria and Israel, has become increasingly unstable as the Assad regime loses its grip on power and radical Islamist and al-Qaida-inspired elements of the Free Syrian Army – reportedly backed directly or indirectly by the likes of Qatar and Saudi Arabia – move into the void.

The situation in Syria is "liquid, unstable and dangerous," Gantz said in remarks at the 13th Herzilya Conference on Israeli security. If Assad falls, Syria's massive arsenal of weapons could fall into the wrong hands. Those jihadi groups would feel tempted to target Israel. As if to reinforce Gantz's point, Reuters reported last Thursday that 1,000 insurgents have moved into Khan Sheikh, just 15 miles from the Golan, after killing 30 soldiers in a battle for a Syrian government missile squadron south of Damascus.

"The terror organizations are gaining footholds in the territory," Gantz said.

That threat adds to the already tense situation in Israel's north, where Hizballah poses a constant threat. "[The North] could explode at any moment," Gantz said. "We are prepared and we will know to act with the required force directly against Hezbollah and its state surroundings."

In a widely reported comment, Gantz added, "Lebanon, as the neighboring state, can't be sovereign but not responsible. If this goes off, I'd rather be an Israeli civilian, and not a Lebanese civilian."

The recent abduction of 21 Filipino UN peacekeeping forces on the Golan border by a group associated with the Free Syrian Army highlights the escalating tensions on Syria's southern border. Although the men were released unharmed, Croatia announced last week that it would withdraw its 100 men from the UN mission "very soon." So far in 2013 Canada and Japan have pulled out, leaving just Austria, the Philippines, and India providing peacekeeping troops on the border; only the Indian mission appears fully committed to staying.

Fears that the UN may withdraw its entire mission, leaving unfettered freedom of movement for terror groups on Israel's border, were hardly allayed at a recent press conference given by Martin Nesirky, spokesman for UN Secretary-General, Ban Ki-Moon.

"Clearly, the mission there in Golan needs to review its security arrangements, and it has been doing that," Nesirky told reporters March 8. "It has also been looking at different scenarios, different arrangements, how to operate in these new, rather difficult and challenging circumstances. I don't have any further details on that, except one aspect: that night patrols are no longer being carried out. This is something that was carried out in the past; they are no longer being carried out."

While the majority of violence in Syria has been far from the Israeli border, "there have been bullets crossing the [Golan] border, and a rocket, and of course we had the kidnapping incident involving the UN observers," Israeli Foreign Ministry spokesman Paul Hirschson, told the Investigative Project on Terrorism.

Until now, the Israeli fear was the transfer of weapons to Hizballah and other hostile forces. Now, Hirschson said, comes uncertainty about a post-Assad Syria. "It's something we are concerned about," he said. "I don't know that at this point it is the biggest concern we have in our lives – I think the transfer of chemical weapons, non-conventional and strategic weapons such as surface-to-air and surface-to-sea weapons, or various strategic weaponry which Syria has but may well fall into the hands of Hizballah; that is probably far more of a concern to us today – but the border with Syria and the stability there is not going to go away and is possibly going to get worse."

He expressed confidence the UN would maintain a presence along the northern border, crediting it with helping to maintain "a quiet [Syrian] border for 40 years."

Hirschson appeared less enthused about the UN's role on the Lebanese border, saying, "We've not been excited about what's gone on in southern Lebanon. What goes on in Lebanon is a completely different story and is about UNIFIL, the UN's forces in Lebanon."

Leaving aside Hirschson's diplomatic language, the plain fact is that UNIFIL's own website mission statement shows it has been a thoroughly ineffective force in south Lebanon, an area completely controlled by the terror group Hizballah.

UNIFIL's website describes its mission as: "Assist the Government of Lebanon in securing its borders and other entry points to prevent the entry in Lebanon without its consent of arms or related materiel."

With a reported 70,000 missiles and masses of other armaments, by any measure UNIFIL's inability to carry out its mandate in south Lebanon has been a dismal, embarrassing failure. Hizballah not only poses a persistent threat to Israel, it has also sent thousands of men to fight alongside President Assad's forces in Syria, before potentially returning to southern Lebanon with Syrian weapons.

Confirmation of the potential danger facing Israel as radical Islamist organizations take control of strategic areas of Syria comes from no less a source than Abdel Bari Atwan, Editor-in-Chief of the London-based Al Quds Alarabi newspaper, who revealed on his own website on March 11, "Islamist militants in Syria [have] formed an actual government – under the name, the Religious Committee of the Eastern Zone – to run rebel-controlled areas, particularly ones in the hands of Islamist fundamentalists. These groups have cemented their place as the leaders of many parts of Syria, whether the regime can hold on to power or not."

Atwan added, "Jabhat al-Nusra and the other militant groups in Syria are following the Taliban's model to the letter – implementing Sharia law, providing security, some social services and driving out competitors. The Taliban did this and ended up in control of 90 percent of Afghanistan." In a statement released on March 10, the Religious Committee of the Eastern Zone, which reportedly includes Jabhat al-Nusra, announced, "God commanded the Islamic battalions to form a religious council in the east to administer the affairs of the people and fill a security gap."

Jabhat al-Nusra is just one of a number of hardline Islamist groups operating in Syria under the general banner of the Free Syrian Army, the organization that receives financial and other support – via the opposition Syrian National Council – from the US, EU and Arab supporters like Qatar and Saudi Arabia. Iraq-based al-Qaida groups have crossed the border to join the fight against Assad, while the Syrian Islamic Front – which has appeared on the scene only in the last three or four months – represent 10 or more separate Islamic militant groups. Ghuraba al Sham, another radical Islamist organization that has attracted many foreign jihadi fighters to its ranks, also operates openly in Syria.

In a new twist, according to Al Monitor, it appears that Gaza-based Salafists – financed once again by Qatar and Saudi Arabia – have joined the fight in Syria against Assad and have allied themselves with Jabhat al-Nusra.

The prospect of Syria's break-up and a Taliban-style regime potentially extending to its border is a big concern for Israel, Atwan wrote. "Peace and quiet in the Golan Heights has prevailed since 1973, but Islamist militias are now bringing that to an end. With or without coordination between these jihadi groups Israel could find itself facing Hezbollah in southern Lebanon and Jabhat al-Nusra and co along its eastern borders."

But Tony Badran, a research fellow at the Washington-based Foundation for Defense of Democracies, told the Investigative Project on Terrorism he feels it highly unlikely that the Shia fighters in Hizballah will join with Sunni radicals now fighting on the opposing side in Syria.

"Jabhat al-Nusra have already said that they do not want to attack Israel at this stage so as not to draw an Israeli response which would scatter their capabilities and harm their priority, which is the take-down of the Assad regime and the Alawites," Badran explained. "There are a plethora of militia [forces opposing Assad] operating there [Syria], so you have operational chaos. You have a kind of no-man's land feel there with everybody having a say in things."

"I think that Hizballah is higher on their list of enemies than Israel is. They are fighting each other in Syria right now - in Homs and around Damascus - and Hizballah has been shelling them. They feel Hizballah is part of the defence forces of the regime which makes them a direct enemy. I don't see them suddenly saying that Israel trumps all of this so we're going to align ourselves with Hizballah."

Badran describes the current policies of both the US and EU in Syria as "moving from sheer cynicism to abject incompetence," but believes that for the time being a major attack on Israel is highly unlikely. "There may be sporadic attacks on Israel but really nothing of a strategic nature." Badran concluded. "For now, I believe we're talking more of tactical nuisances every so often."

Paul Alster is an Israel-based journalist who blogs at www.paulalster.com and can be followed on Twitter @paul_alster

Is this the same group of Rebels the US is arming?

Are these the same Syrian Rebels who were aquiring Libyan weapons from US through Benghazi?

If so, doesnt somebody have some explaining to do????