From the Company of Shadows 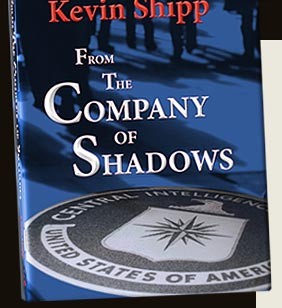 From The Company of Shadows by author Kevin Shipp offers a fascinating insider's view of the Central Intelligence Agency (CIA) from the perspective of someone who lived in the agency's top echelons from the end of the Cold War to the War on Terror.

The book reads like a James Bond novel, only the characters and situations are real. It delves into the CIA's internal politics and abuses of power that he contends has made America less free and less safe.

Shipp should know, having served in roles ranging from working as a security officer assigned to the protection detail of the Director of Central Intelligence (DCI) and Deputy Director of Central Intelligence (DDCI) to being a counter-terrorism instructor for the agency's Counterterrorism Center. He was a decorated CIA officer whose view of the agency shifted from one of idealism to one of sobriety about its real nature as his career progressed.

Shipp joined the CIA in 1985 and had a front-row seat as the Iran-Contra scandal emerged two years later. The author attributes the momentum behind the scandal to late CIA Director William Casey's personal devotion to William Buckley, the CIA's station chief in Beirut, Lebanon who had been kidnapped by the Islamic Jihad terrorist group and was tortured daily before being murdered in 1985.

Casey felt responsible for Buckley's predicament and wanted to ensure that Buckley and the other hostages being held by terrorists in Lebanon were rescued, but the plan backfired.

Shipp describes the late CIA director as "one of the last real servants of democracy" who was willing to take personal risks. But Casey's death marked a turning point for the agency, which soon found itself looking for its mission after the Cold War.

The arms-for-hostages episode served as a warning to Shipp that there was no negotiating with religious fundamentalists.

His view of the agency started to change after the start of the Clinton administration when the focus shifted from serving national security to serving political correctness. A move in this direction already had begun back in the Carter administration when CIA Director Stansfield Turner slashed the number of spies on the ground in favor of satellite and electronic surveillance.

Turner's decision to eviscerate the CIA's human intelligence capabilities touched off series of disastrous decisions that led the agency to heavily rely on unreliable defectors who fed it bad intelligence.

In addition to recruiting substandard new hires, it issued an order prohibiting CIA officers from having contact with foreign nationals engaged in human-rights abuses.

This contributed to intelligence failures leading up to the Iraq war and even the 9/11 attacks, Shipp writes.

By the time the 9/11 attacks took place, the CIA was "deaf, dumb and blind" about Islamist extremist groups and agents scrambled to gather intelligence from open-source materials, Shipp writes. CNN frequently had better sources about what was happening overseas than the CIA.

The same holds true about other Islamist terrorist groups.

Many of these groups such as Hamas, Palestinian Islamic Jihad and the Muslim Brotherhood have established a strong foothold in the United States working through front groups such as the Council on American Islamic Relations (CAIR), the Muslim American Society (MAS) and Muslim Public Affairs Council, Shipp writes.

These groups have succeeded in getting the Obama administration to declare there is "no War on Terror" and adhere to the view that Islam has nothing to do with terrorism.

Shipp's book takes a strongly critical view of the Patriot Act, which he claims violates the Fourth Amendment's prohibition on illegal searches and seizures.

He warns that the act has transformed the agency into a global police force that has asserted the right to spy on American citizens without constraints. Shipp writes that he saw criminal activity and serious security lapses while working for the agency, but was ordered not to report them.

The book concludes like something out of a Hollywood movie, with Shipp discussing the constant surveillance and a "litany of break-ins" into his home after he blew the whistle on CIA practices that agency officials blacked out of his manuscript.

"The CIA has made many honorable and courageous contributions to our nation's protections, some of which I was part of while I was there," Shipp writes. "But as a system, it has become out of control and overstepped the constitutional balance designed to keep it in check and accountable to our democratic system of government."

The book was published in 2012 by Ascent Publishing and can be purchased on Amazon.