An image of former Sen. Chuck Hagel addressing the 2008 Arab-American Anti-Discrimination Committee's (ADC) national convention is raising new questions about a White House claim that Hagel made no "formal speech" before the group.

Hagel's nomination to be President Obama's new defense secretary is on hold as Republicans try to wage a filibuster until more information is provided about September's terror attack on the U.S. Consulate in Benghazi, Libya. 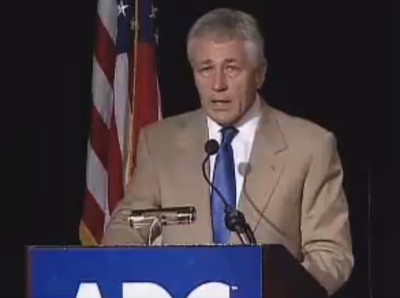 But the image of Hagel at an ADC podium, uncovered by the Investigative Project on Terrorism, stoked interest about disclosures he made to the Senate Armed Services Committee. Hagel gave 12 speeches over the past five years for which he received honoraria, but only submitted four speeches in response to the committee's questions. During his confirmation hearing, he said that he had given many of these speeches "extemporaneously" without any prepared texts.

A White House official dismissed the appearance before the ADC, telling Fox News it "was with an organization that combats discrimination." But the now-defunct ADC PAC made donations to anti-Israel and pro-Islamist members of Congress including Rep. Keith Ellison, D-Minn., former Rep. Dennis Kucinich, D-Ohio, and President Obama's 2008 campaign.

ADC has had a long history of hostility toward Israel and pro-Hizballah apologia.

"Except for Sen. Chuck Hagel of Nebraska, no one in Congress is willing to stand up to the Israel Lobby and call for an immediate cease fire and for fairness for Lebanon," former Sen. James G. Abourezk, D-S.D., wrote in a 2006 ADC commentary that referred to Hizballah, not as a terrorist group, but as "a military group that has defended Lebanon against Israeli depredations."

The group also has received donations from foreign sources, including $2.6 million for the construction of its Washington, D.C. headquarters from Saudi Prince Alwaleed bin Abdulaziz al-Saud and sponsorships for its conventions over the years from the Embassy of Saudi Arabia, Bin Talal's Kingdom Holding Company, Saudi Aramco (the Saudi state oil company) and the Embassy of Qatar among others.

A June 2008 press release for the event lists Hagel as the keynote speaker at the banquet, and as the recipient of the ADC's "Outstanding Service Award;" however, the convention's agenda shows that he spoke at the fundraising reception instead.

The ADC has video of the event, but it is in an "archive" and not available for release, ADC Vice President Nabil Mohamad told the Washington Free Beacon.

what next? a photo of him making shahada? Hagel's lack of transparency will only lead to wild conspiracy, he needs to provide answers.