Guest Column: The Rape and Murder of Pakistan's Christian Children 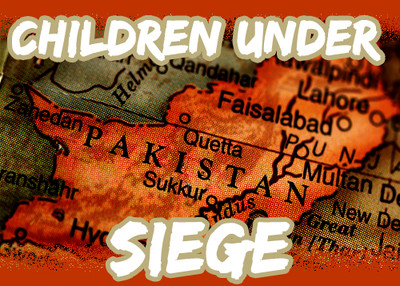 The West sighed in relief when Rimsha Masih, the 14-year-old Christian girl arrested in Pakistan on August 16 for allegedly burning pages of the Quran, was finally released. Yet the West remains clueless concerning the graphic abuses—including rape and murder—Christian children in Pakistan routinely suffer, simply for being Christian. Consider two stories alone, both of which occurred at the same time Rimsha's blasphemy ordeal was making headlines around the world.

On August 14, another Christian girl, 12-year-old Muqadas Kainat (which means "Holy Universe") was ambushed in a field near her home in Sahawil by five Muslim men who "gang raped and murdered" her. At the time, her father was at a hospital visiting her sick mother. He and other family members began a frantic search, until a tip led them to the field where his daughter's body lay. The postmortem revealed that she had been "gang raped and later strangled to death by five men." Police, as usual, did not arrest anyone. As a Salem News report puts it, "Complicating matters is the fact that several Christian girls in this remote area have been raped and forced to both marry into the Muslim community and abandon their own religion, human rights groups report…. there is a history in this part of Pakistan according to the Christian community, of local authorities failing to investigate cases of rape or other violence against Christians, often for fear of influential Muslims or militants."

Similarly, on August 20, an 11-year-old Christian boy, Samuel Yaqoob, went to the markets of Faisalabad to buy food for his family, never to return. According to Wilson Chowdhry, Chairman of the British Pakistani Christian Association, "After extensive searching his body was found near a drain in the Christian colony, bearing marks of horrific torture, with the murder weapon nearby. His nose, lips and belly had been sliced off, and his family could hardly recognize him because the body was so badly burnt. Some 23 wounds by a sharp weapon have been identified in the autopsy. When sending his body for an autopsy, police raised the possibility of sodomy. Parts of Pakistani culture have a strong homosexual pederast culture, and Christian and other minority boys are especially susceptible to rape and abuse because of the powerlessness of their community and their despised status. In one case fairly recently, a Christian boy was kidnapped, raped, tortured and killed by a police officer, his body similarly being dumped in a drain."

These were just some of the stories concerning the sexual abuse and murder of Pakistan's Christian children that occurred last August—even as the world stood in awe at the Rimsha Masih blasphemy case. Here are 10 more examples, chosen at random from the many former documented cases:

In every one of these cases, Pakistani police either failed to act or sided with the rapists and murderers.

The anecdotes represent a mere sampling of the documented atrocities committed against the children of Pakistan's Christians, who amount for a miniscule 1.5% of the nation's population. Then there are the stories that never make it to any media—stories of silent abuse that only the nameless, faceless victims know. For example, it took five years for the story of a 2-year-old toddler who was savagely raped because her Christian father refused to convert to Islam to surface. After undergoing five surgeries, her anatomy remains disfigured and she suffers from several permanent complications. Her family lives in fear and hiding.

How many Christian children in Pakistan are being mauled in silence, with their stories never surfacing?

And what animates this savagery? Discussing the aforementioned rape of 9-year-old Gulfam, local sources in Pakistan put it well: "It is shameful. Such incidents occur frequently. Christian girls are considered goods to be damaged at leisure. Abusing them is a right. According to the [Muslim] community's mentality it is not even a crime. Muslims regard them as spoils of war."

Indeed, here is how the late Majid Khadduri, "internationally recognized as one of the world's leading authorities on Islamic law and jurisprudence," explained the idea of human "spoils" in his War and Peace in the Law of Islam:

The term spoil (ghanima) is applied specifically to property acquired by force from non-Muslims. It includes, however, not only property (movable and immovable) but also persons, whether in the capacity of asra (prisoners of war) or sabi (women and children). … If the slave were a woman, the master was permitted to have sexual connection with her as a concubine.

From here, one can begin to understand the rabid fanaticism that possessed Pakistan's Muslims concerning the Rifsha blasphemy case, which resulted in mass riots, Muslim threats to take the law in their own hands, and the dislocation of Christians, some of whom have been forced to live and worship in the wilderness: if infidel Christians, especially their children, are seen as mere "spoils" to be used and disposed of with impunity, certainly it must be intolerable for Muslims if one of these "sub-humans" dares to desecrate Islam's holy book—the same book that ordains their inhuman status.

And herein is the true significance of the Rifsha Masih case: success can be measured not in the fact that this one particular Christian child got away from the savageries of Islamic law and culture, but whether her ordeal will begin to open Western eyes to the terrors Pakistan's Christian children routinely face.

Just as many of the Jews of Europe were smuggled out after WWII to save their lives, someone should set up an escape route for all of the Christians in Pakistan, to begin with, and elsewhere as needed. Perhaps the Vatican could put some of it funds to this good use. These people need our help and they need it now. Perhaps some of the Christian churches could come together and support a way to get them out of the hands of those barbarians.

Please let me know what I can do to help personally.

These precious children are suffering and dying for our sins

Jesus said that what is done to little ones is done to Him. These little victims are Christian martyrs and saints. We should ask them to pray for us that we would have the generosity and courage to bring the Christian Gospel and virtues to this sick, sad, empty culture.

America should DO NOTHING about this....we must not shed our Marine's blood!!!

Islamists are wild animals bent on destroying modernity. Why should we shed our American soldier's blood to preserve the lives of Pakistanis??? Christian Pakis needed to have left their country when they saw it being subsumed by Islamofascists. Now WE? have to rescue them...no..damn no. Similarly, Coptic Christians in Egypt should have left Egypt long ago when Islam swept ove rthat country in the last 3 decades. It is not our job to save these people from their negative counterparts. They need to rise up and kill Islamofascists...using rich Arab's $$ rather than precious American blood. And in the future, WHEN (not IF) the Islamic situation threatens up despite our avoidance of these scum, then we need to reinvigorate our NEUTRON BOMB program and take each animalistic country out without destroying the infrastructure...wouldn't want to ruin the pyramids or the Sphinx!

America should do something right away

I am very sorry to hear about the injustice and torture and rape of Christians in Pakistan. We need to pressurize Islamabad to take action against those men and to save Christians from this misery. We need to tie our financial aid to justice for Christians and protection for Christians. The men who do such barbaric acts will stop if the government in Pakistan begins executing them for such deeds. One reason why they continue doing such evil deeds is because they are sure the government will not hold them accountable.

Please let me know what I can do, personally