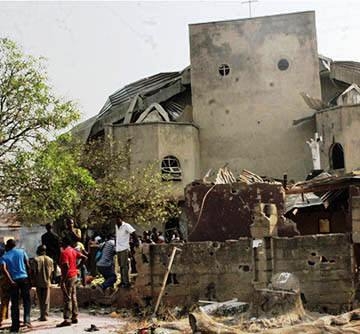 The month of Ramadan, which ended earlier this week, proved to be a month of renewed Muslim piety on the one hand, and renewed oppression of non-Muslim minorities on the other. In Nigeria, for example, Islamic militants are living up to the assertion that "Ramadan is a month of jihad and death for Allah," proving that killing Christians is not only reserved for Christian holidays like Christmas and Easter – when militants bombed churches killing dozens – but is especially applicable during Islam's Ramadan.

Usually, however, Ramadan-related oppression has to do with Muslim perceptions that Christians do not "know their place"—either because the latter openly do things forbidden to Muslims during Ramadan, or because they dare object to the things Muslims do during Ramadan.

When it comes to these aspects of dhimmitude, Egypt offers countless examples, past and present, simply because it houses the Middle East's largest Christian minority, the Copts, and thus offers more opportunities for the intolerant face of Ramadan to reveal itself. Two recent examples follow:

First, according to Coptic websites, on July 27, a diabetic man in Egypt was driving his car in Maadi, a suburb of southern Cairo, when he was struck with great thirst, "which he could not bear" (a side-effect of diabetes, further exacerbated by Egypt's July weather). He pulled over near a public water source and started drinking water. Soon three passers-by approached him, inquiring why he was drinking water (among the many things forbidden to Muslims during daylight in Ramadan). The diabetic man replied, "Because I am a Christian, and sick," to which they exclaimed "you're a Christian, too!" and begun beating him mercilessly. Other passers-by began to congregate to see what was happening, but no one intervened on behalf of the diabetic non-Muslim until he managed to make a dash for his parked car and fled the scene.

Though not forbidden to him, this infidel Christian openly violated a principle of Islamic Ramadan, which was deemed a great affront and was punished accordingly. This idea that non-Muslims must show respect for Islamic observances is commonplace. Around the same time this story took place, for instance, a Christian Lebanese singer was taken to police while in Algeria for smoking in public, and "failing to show due respect to Muslims." She was released after police warned her that "she was not allowed to smoke in public during Ramadan in Muslim Algeria, even though she was a Christian."

The second story from Egypt concerns a young Christian doctor, Maher Rizkalla Ghali, who was shot by riotous Muslims, including easily-identified Salafis, resulting in the loss of one eye and the likely loss of the other. According to Watan Voice, the perpetrators live downstairs and regularly fired bullets in the air while feasting during sahur (the time before dawn when Muslims are permitted the things they are forbidden in daylight, including food, water, and sex). One night the raucous was so unbearable that the Copt spoke to them from his window, saying that their actions were disturbing to the children and elderly.

Their response was to "insult his religion" and open fire at him, severely disfiguring him. The Muslims then tried to break through the door to attack and plunder the Christian household. Although the family filed a police report, "security forces have not taken any action towards the perpetrators." Likewise, though they tried to admit the blinded Christian man to several hospitals, they were refused admission until Kasr Hospital accepted them.

This story is almost identical to what happened to a family in Turkey around the same time. According to Hurriyet Daily News, the home of an Alevi family "was stoned and their stables burned down by an angry mob" because they "told a Ramadan drummer not to wake them for sahur, the meal before sunrise," resulting in a quarrel. After local Muslims found out about the family's temerity, "a mob of around 60 people" gathered around the house hurling stones, setting the stable on fire, and chanting Islamic slogans, including "Allahu Akbar!" "They came to lynch us," explained a family member, and "told us to leave and threatened to kill us if we did not."

The above anecdotes demonstrate the stark antithesis between the West and the Muslim world concerning the notion of being "sensitive" to religious minorities during the holidays of the dominant religion: whereas almost every year, stories appear of Christmas being suppressed to accommodate Muslim sensitivities in the West, in the Muslim world, Christians themselves are being suppressed to accommodate Muslim sensitivities.