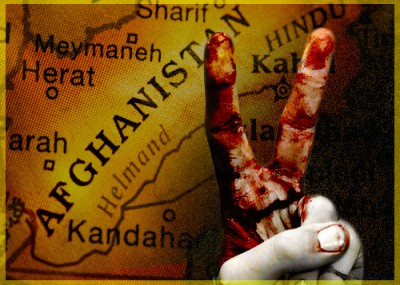 The Obama administration is considering releasing five top Taliban jihadists from custody at Guantanamo Bay in hopes of negotiating a peace agreement with the Afghan terrorist movement. Secretary of State Hillary Clinton said last week that administration is in "the preliminary stages" of testing whether talks with the Taliban can succeed.

President Obama plans to withdraw virtually all U.S. troops from Afghanistan by 2014. Last month, Vice President Joe Biden told an interviewer that "the Taliban per se is not our enemy."

Republican presidential frontrunner Mitt Romney blasted Obama's approach to the Taliban, declaring that "The right course for America is not to negotiate with the Taliban while the Taliban are killing our soldiers." Yet one of Romney's top foreign policy aides has reportedly advocated a negotiating approach that is similar to Obama's.

According to a recent report in The Hindu, radical Islamist cleric and Muslim Brotherhood spiritual guide Yusuf al-Qaradawi has served as a "key mediator" in U.S.-Taliban negotiations.

The Taliban's recent announcement that it plans to open a political office in Qatar meets a longstanding U.S./NATO condition for discussing Afghanistan's future with the terror group. Earlier this month, reports indicated that Washington had agreed to transfer the five Taliban leaders from U.S. custody to Afghan President Hamid Karzai's government.

At some point, they could be set free.

Another report indicated the jihadists would be transferred to Qatar, a nation with a poor record on combating terrorism and a suspected link to the 9/11 attacks.

The strategy is fraught with peril as previous experience has shown. Still, the State Department has made finding a negotiating address for the Taliban a top priority.

In November 2010, an imposter posing as a Taliban representative stole several hundred thousand dollars from Western officials trying to woo the group into joining negotiations. In September, a suicide bomber disguised as a Taliban peace envoy blew up former Afghan President Berhanuddin Rabbani, head of a government council seeking a political solution with insurgents.

But analysts say that demands from the Taliban, which ruled Afghanistan from 1996-2001 and provided training facilities for the 9/11 hijackers, may be too risky. The five Taliban leaders "have provided critical support to the integration of the Taliban into al-Qaida both politically and militarily," said Bill Roggio, managing editor of the Long War Journal and a senior fellow with the Foundation for Defense of Democracies (FDD). "They were part of forging ties with al-Qaida before and after 9/11."

Given the fact that none of the five have renounced al-Qaida or jihadism, their release from custody makes no sense "if we want to leave behind an Afghanistan not controlled by al-Qaida," Roggio told the Investigative Project on Terrorism.

History shows that Afghan officials, including Karzai (who is now demanding that Washington turn its prison facilities in Afghanistan over to his government in a month), have been "personally involved" in releasing other terrorists detained by the United States from prison, said Thomas Joscelyn of FDD.

He points to an Aug. 6, 2009 cable originating at the U.S. Embassy in Kabul, which noted that the Bush and Obama administrations were vexed by Karzai's willingness to release dangerous prisoners. U.S. officials have repeatedly emphasized to Afghanistan's attorney general "the need to end interventions by him and President Karzai, who both authorize the release of detainees pre-trial and allow dangerous individuals to go free or re-enter the battlefield without ever facing an Afghan court."

Fazi was a top Taliban commander before his capture in November 2001. According to JTF-GTMO, he cooperated with Abdel Hadi al Iraqi, who led the 055 Brigade–Osama bin Laden's chief fighting force, which served with Taliban units.

Fazi would likely rejoin the Taliban if released from U.S. custody "and establish ties with elements participating in hostilities against U.S. forces in Afghanistan," JTF-GTMO warned.

Fazi is also wanted by the United Nations in connection with war crimes, including the murders of thousands of Afghan Shiites.

Noori (also wanted by the U.N. for anti-Shiite atrocities) had ties to Mullah Omar, the Taliban's Supreme Leader, as well as to senior al-Qaida members. He fought alongside al-Qaida as a Taliban military general and was involved in fighting U.S. forces in late 2001.

A task force threat assessment found that Wasiq "was central to the Taliban's efforts to form alliances with other Islamic fundamentalist groups to fight alongside the Taliban against U.S. and Coalition forces after the 11 September 2001 attacks." Wasiq arranged al-Qaida training of Taliban operatives that was reportedly conducted by Hamza Zubayr, a senior terrorist killed during the September 2002 raid in which 9/11 organizer Ramzi Binalshibh was captured.

Joscelyn quoted U.S. officials at Guantanamo as stating that Khairkhwa was a major drug trafficker who oversaw one of bin Laden's training facilities. A JTF-GTMO file on Khairkhwa said that following 9/11, he "represented the Taliban during meetings with Iranian officials seeking to support hostilities against U.S. and Coalition forces."

In a Jan. 23, 2008 memo, JTF-GTMO analysts said Nabi had been a senior Taliban official who served as a "member of a joint al Qaeda/Taliban…cell in Khowst and was involved in attacks against U.S. and Coalition forces" and "facilitated the smuggling of fighters and weapons."

If any of the five are released by the United States, Joscelyn said, they may well follow the example of Mullah Abdul Qayum Zakir, a former detainee who was released from Guantanamo in December 2007 and became a senior Taliban commander targeting and killing U.S. soldiers on the battlefield – a position he holds today.

Even State Department officials – "the most dovish part of the U.S. government" – do not sound very optimistic about the prospect of successfully negotiating with Taliban, Joscelyn noted, with one recently estimating the chances of success at just 30 percent.

Indeed, even as Washington courts the Taliban, feuding Taliban factions in Afghanistan and Pakistan responded positively to an initiative from one of al-Qaida's top commanders, Abu Yahya al-Libi, who persuaded them to put aside differences and create a new military alliance against NATO and U.S. forces in Afghanistan. At a recent meeting, al-Libi reportedly won a promise from Pakistani Taliban officials to send fighters to Afghanistan to wage jihad against "U.S.-led infidel forces."

Roggio, who closely monitors events on the battlefield, says current trends are not favorable to the U.S. and NATO efforts to stabilize the country. In large swaths of Afghanistan, the Taliban "seizes control once the sun goes down" and government and Western forces have ended their patrols, he said. The fact that many Afghan travelers find it necessary for their own safety to disguise themselves as Taliban supporters is another troubling indicator of the security situation in the country today.

He believes President Obama's insistence on a 2014 withdrawal date for U.S. forces is undermining Washington's credibility in dealing with allies and foes. Some members of Congress have sent classified letters challenging the tentative plan to release the Taliban prisoners and some have raised the possibility of blocking the transfer by attaching amendments to unrelated legislation.

"I think that, ultimately, the fact that the U.S. is pulling back troops is an important message for [the Taliban]—that they are winning," Roggio said. "The Taliban will use this to keep their forces on the battlefield. Telling them that we're on the way out tells them that time is on their side."

All of this is happening at a time when there are close to 100,000 U.S. troops in Afghanistan, he said, adding: "It doesn't take a lot of imagination to see what's likely to happen if American troops are gone two years from now."

John Kerry, remember the guy who returned from Viet Nam ... remember the anti American things he said with our troops still fighting??? John Kerry, do not refer to the Obama Five muslim taliban killers as "baloney." Let's all google "john kerry and his anti american stance re viet nam" we will have lot of fun putting it on the internet.

I respect the soldiers who have come out and told us what happened with bergdaul...thank you for your service.

Would we have traded Hiltler's top five commanders for a private soldier who was promoted while in captivity to appease someone......s

No Mention Of Bowe Bergdahl

I know the government would like to sweep Bowe Bergdahl under the rug as they release these murderers, but new media can not follow suit. No release with out Bowe's release first.