ACLU and Islamists vs. the FBI...Yet Again 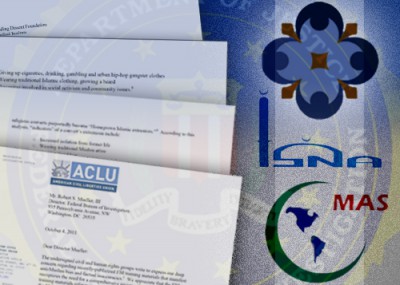 The American Civil Liberties Union (ACLU) issued an open letter to FBI Director Robert Mueller last week calling for reform of Bureau training materials the ACLU claims are biased against Muslims. The ACLU letter cited a July article by Spencer Ackerman on WiredNews.com concerning training materials that, in part, allegedly depicted Muslims in a derogatory way. The FBI responded by saying it no longer used that particular training material, which was reported to be only a segment of an overall counter-terrorism presentation.

The ACLU letter also principally focused on an FBI Intelligence Assessment document dated May 10, 2006 on homegrown Islamic terrorist radicalization titled, "The Radicalization Process: From Conversion to Jihad," claiming the assessment portrays converts to Islam in America as targets for radicalization who should primarily and mostly be viewed as suspects.

The ACLU letter offers criticism of the FBI assessment by stating:

"For instance, a 2006 FBI Intelligence Assessment "The Radicalization Process: From Conversion to Jihad," which was published in May 2006 but restricted from public distribution until it was leaked on the internet sometime later, identifies a four-step "radicalization cycle" in which religious converts purportedly become "Homegrown Islamic extremists." According to this analysis, "indicators" of a convert's extremism include:

o Frequent attendance at a mosque or a prayer group

o Travel to a Muslim country

Such innocuous behaviors may indicate strong religious beliefs, and each is entirely protected by the First Amendment to the Constitution. Millions of Muslim-Americans may engage in some or all of them on a routine basis. Claiming these behaviors are indicative of a progression toward extremist violence is therefore both factually unsupportable and improper under the law."

While the assessment lists the segments identified in the ACLU letter, the context given in the ACLU letter is notably skewed. It indicates the full sum of the FBI assessment focused on those listed "indicators" that, in and of themselves, could well be innocent constitutionally protected activities.

In fact, there are 14 total "indicators" in three separate categories, not the seven listed individually in the ACLU letter. Among the other seven in the assessment are:

- Attendance at a training camp or participation in paramilitary training

- Travel without obvious source of funds

- Large transfer of funds, from or to overseas

The three separate categories are "identification," "indoctrination" and "action." Taken in that more detailed context, these "indicators" are significantly more focused on the pertinent issue of jihadist radicalization.

The 12-page detailed FBI assessment repeatedly states that conversion to Islam does not always lead to radicalization. The assessment cites a series of steps a homegrown jihadist likely undergoes in the radicalization process, and notes that process is fluid and subject to significant external influence. The assessment offers its findings as a result of investigative case analysis and academic sources.

In contrast to what the ACLU states is the FBI's posture in its assessment, a chart on page four identifies a series of factors that may indicate a path toward radicalization among converts, and those factors mirror circumstances identified in the real world cases of radicalized American jihadists.

Among those factors, the assessment chart:

The FBI assessment was clear in its description of the radicalization process as being far more than mere innocent constitutionally protected religious and political activity, but rather, it noted such activities may be part of the process leading to the radicalization that results in jihadist terror. The ACLU letter, joined by several Islamist organizations including CAIR, MAS and ISNA, cherry picks elements from the assessment, takes them out of context and offers them for slanted criticism.