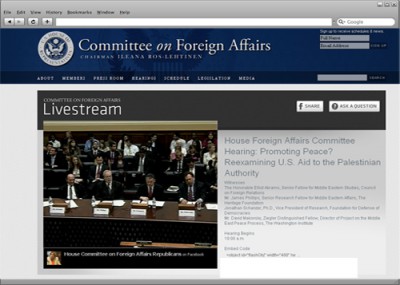 A bipartisan group of lawmakers sent Palestinian Authority officials a powerful message Tuesday: There will be severe consequences for any attempt to have the United Nations recognize an independent Palestinian state based on Israel's June 4, 1967 borders.

That could range from the closing of Palestine Liberation Organization offices in Washington and other diplomatic actions, to a full cutoff of American foreign aid to the Palestinian Authority (PA). Such a unilateral action violates the 18-year-old Oslo Accords, brokered by the United States, which call for direct negotiations to resolve any conflict.

In testimony delivered at House Foreign Affairs Committee hearing, witnesses noted that three-quarters of the PA budget comes from value-added tax collections remitted by Israel along with foreign aid, much of which comes from the United States. Washington has provided more than $4 billion in bilateral aid to the Palestinians since the 1993 Oslo Accords. In this fiscal year, U.S. aid is set at $550 million - $400 million in economic assistance and $150 million for equipping and training Palestinian security forces.

Others suggested cutting off American funding for any United Nations program that recognizes the Palestinian state.

Rep. Dana Rohrabacher, R-Cal., who has been sharply critical of Israeli policies in the past, said Israel has made important concessions for peace such as accepting the creation of a Palestinian state and recognizing the need to relinquish territory. Yet rockets continue to be fired into Israel from Gaza, and the Palestinians refuse to give up the "right of return" to their families' previous homes in Israel (which Israelis regard as a formula for the destruction of the Jewish State). And the PA continues to print and broadcast incendiary anti-Semitic hatred, applaud murderous terrorist acts against Israel and publish anti-Semitic screeds in children's textbooks.

"I can't see what the Palestinians have given up," Rohrabacher said. U.S. assistance to the PA seems to be aimed at making ourselves "feel good" rather than advancing U.S. policy goals such as Middle East peace.

Rep. Eliot Engel, D-N.Y., said that by going to the UN instead of negotiating with Israel, Authority Chairman Mahmoud Abbas is violating Oslo and UN Security Council Resolution 242, both of which call for a negotiated settlement of the Israeli-Palestinian conflict. "This is not land for peace. It's land for nothing," he said. "Where is Israel's peace in all of this?"

Democrats and Republicans on the committee criticized the Obama administration for being slow and ineffective in responding to the Palestinian gambit. It's the latest in a series of policy errors, dating back to its emphasis on a settlement freeze as a starting point for peace negotiations, they said.

"When the president talks of settlements and '67 lines, it's not helpful," Engel said. "It gives the Palestinians one more excuse not to talk to Israel."

Supporters of a two-state solution oppose the move because they also "believe that people have to live with the consequences of their actions," said Rep. Gary Ackerman, D-N.Y. He indicated that a total cutoff of U.S. assistance to the PA might be warranted and suggested that the Palestinians should seek assistance from the U.N. if they continue to pursue their current course.

Testimony before the committee placed blame for the current situation squarely on Abbas, who has failed to tackle endemic corruption and has worked to undermine PA Prime Minister Salaam Fayyad, who has tried to create some financial accountability and opposed Abbas' efforts to declare statehood unilaterally.

But "Fayyad has been sidelined" by Abbas, who "has consolidated power, and… is now abusing it," said Jonathan Schanzer of the Foundation for the Defense of Democracies.

One particularly egregious example is the Palestine Investment Fund, created in 2002 to manage and allocate money and commercial interests owned by the PA. Abbas changed the charter, put his own people on the board and neglected to audit it. There are allegations that more than $1 billion is missing from the fund.

Another problem, Schanzer said, is the PA's "ambiguous" relationship with Hamas. The PA has secretly permitted Hamas to raise funds through an "electricity scam" in which electricity in Gaza is produced by a power plant guaranteed by the Palestinian Authority, with the bills being collected by Hamas. In July, a former PA advisor told Schanzer that Hamas authorities collect the bills from customers in Gaza but fail to send the funds back to the West Bank.

"In other words, Abbas allows Hamas to raise funds by billing Gazans for electricity they don't generate. And because the PA is funded by U.S. taxpayer money, we are all enabling Hamas to raise these funds," Schanzer testified.

Hamas officials, meanwhile, oppose the UN ploy, saying "it will cement the Palestinians' recognition of Israel's right to exist," which goes against Hamas's absolute goal of destroying the Jewish state.

Meanwhile the PLO's ambassador to the United States said Tuesday that any Palestinian state should be free of Jews. "After the experience of the last 44 years of military occupation and all the conflict and friction, I think it would be in the best interest of the two people[s] to be separated," said Maen Areikat, the PLO ambassador.

Such a state would be the first to officially prohibit Jews or any other faith since Nazi Germany, said former National Security Council official Elliott Abrams, now a senior fellow with the Council on Foreign Relations.

An excerpt from the Origins of the Balfour Declaration - 1917

The British were busy making promises. Henry McMahon had exchanged letters with Hussein ibn Ali, Sheriff of Mecca in 1915, in which he had promised the Arabs control of the Arab lands, exclusive of the Mediterranean coast. The extent of the coastal exclusion is not clear. Hussein protested that the Arabs of Beirut would greatly oppose isolation from the Arab state or states, but did not it seems, bring up the matter of the area Jerusalem, which included a good part of Palestine. This suggests either that the area of Jerusalem and Palestine was not part of the inclusion and was promised to the Arabs, as shown in some maps, and is believed by pro-Arab historians, or that Palestine was included, but that Hussein did not protest. The latter version is supported by Dr. Chaim Weizmann in his autobiographical book Trial and Error, and that interpretation was convenient to the British also, and supported explicitly by the British government in the White Paper of 1922"

I have spent one hour in a half trying to find the scripture that I found for a class assignment. I went through all of my International Relations assignments from school for the past two years, and though I thought that I found where I referenced the scripture, I must have overlooked it. Therefore, I also looked a bit in the Strong's Exhaustive Concordance, but I am not even done with that. I am looking under brother, dwell, live, and land, as well as curse, and there is much to view.

I am a student, currently studying for my Mid Terms, therefore, I will keep this reply link, so that I may provide the information that you seek.

They will do nothing

Cutting off all funding for the UN would be good. But the Obots will wring their hands, mouth platitudes and do nothing. I will link to this from my Old Jarhead blog.

Author: The Coming Collapse of the American Republic

(All royalties go to a charity to help wounded veterans)

Surely you know your Middle East and Israeli/Arab History, when in fact, the Jews were moved to the Middle East because they had no home of their own, and were not wanted anywhere, and they were being killed in Germany and across Europe. However, the Prince of the Middle East at the time, was promised something by the French (Lord Arthur Balfour) and Sir Henry McMahon, that the French KNEW they would never deliver, and thus, Israel is as it is right now. Israel needs to withdraw, and also stop using child soldiers for this fight. Also, if you do further in your biblical History, they are told by God that they were going to live on the lands of the Brothers and Sisters, in which the Muslims are the children of Ishmael, and Israel is the children of Isaac, however, if God truly wanted them to have this land (as they try to force the Messiah to come early, in order for them to keep it), He would not have had the Prince of the M.E. deceived, in order for them to receive the land. Israel has been taking land ever since. I am in no means against Israel, and I know that God will break as a vase, anyone who goes against her, however, I am for the truth always, and JUSTICE for all, for God is NOT a respecter of persons. God never allowed Abraham to take land, with a deception, therefore, why should his descendents of his son Isaac. It is not truthful, and it is ungodly.

Excerpt below, since I did not have time to go through all of my studies, to find my own paper on the subject.

"....Sir Henry McMahon secretly corresponded with Husayn ibn 'Ali, the patriarch of the Hashemite family and Ottoman governor of Mecca and Medina. McMahon convinced Husayn to lead an Arab revolt against the Ottoman Empire, which was aligned with Germany against Britain and France in the war. McMahon promised that if the Arabs supported Britain in the war, the British government would support the establishment of an independent Arab state under Hashemite rule in the Arab provinces of the Ottoman Empire, including Palestine. The Arab revolt, led by T. E. Lawrence ("Lawrence of Arabia") and Husayn's son Faysal, was successful in defeating the Ottomans, and Britain took control over much of this area during World War I.

But Britain made other promises during the war that conflicted with the Husayn-McMahon understandings. In 1917, the British Foreign Minister, Lord Arthur Balfour, issued a declaration (the Balfour Declaration) announcing his government's support for the establishment of "a Jewish national home in Palestine." A third promise, in the form of a secret agreement, was a deal that Britain and France struck between themselves to carve up the Arab provinces of the Ottoman Empire and divide control of the region.