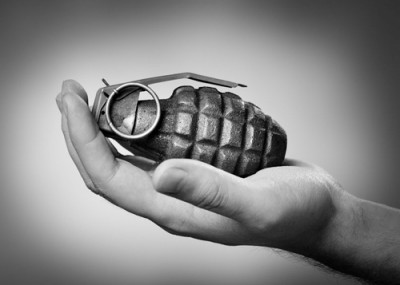 Statistics from a joint study by Mother Jones and the University of California-Berkeley claim that 10 percent of defendants in federal terrorism cases since 9/11 were involved in a plot led by an "agent provocateur."

But a closer examination of those cases exposes several as weak examples of terrorism "instigated" by the FBI.

The FBI has nearly tripled its use of informants since 9/11, the report says. That surge in the number of FBI informants, according to Mother Jones' Trevor Aaronson, is worrisome. "The FBI has built a massive network of spies to prevent another domestic attack," a teaser atop Aaronson's article "Informants," which includes those statistics, reads.

"But are they busting terrorist plots-or leading them?"

Aaronson spends the 7,000-word piece, which includes a "terms of entrapment" glossary, describing terrorism cases in a way that encourages the reader to believe the latter. "The informants play larger roles…where they provided not only the opportunity for the person to commit this act of terror, but also the means," Aaronson told National Public Radio.

Among the examples cited in the study is the case of an Iraqi man, Waad Ramadan Alwan, whose fingerprints were found on an unexploded improvised explosive device (IED) in Iraq in 2005, years before an informant entered the picture.

This informant, sent in 2009 to investigate Alwan, after he entered the United States, did request that Alwan load trucks he believed would be delivered to al-Qaida in Iraq and other militants with Stinger missiles, rocket propelled grenade launchers, machine guns and cash - which Alwan readily did.

But Alwan's history shows that the informant was not leading him to help terrorists he wouldn't have otherwise. He had fought alongside those militants against U.S. troops in Iraq before being granted asylum and entering the United States in 2009. In fact, he was arrested by Iraqi authorities in 2006 and later released.

The informant said that Alwan discussed planting an IED on the side of a road frequented by American vehicles in Iraq. The informant also reported that Alwan said he used "hundreds" of IEDs in Iraq. In January, authorities matched the bomb fingerprints to those Alwan gave for his asylum record.

The heart of another case offered as proof of an unfettered post-9/11 witch hunt actually dates back to before 9/11. Christopher Paul traveled overseas in the early 1990s to fight with mujahideen in Afghanistan. He stayed in a guest house affiliated with al-Qaida while completing his battle training, prosecutors say, and then joined al-Qaida. In 1999, he shipped supplies to a terrorist cell in Germany.

In 2008, Paul pleaded guilty to conspiracy to use a weapon of mass destruction (in this case bombs) against American targets outside the United States. Paul discussed terrorist attacks with Nuradin Abdi and Iyman Faris. It was Faris who alerted FBI authorities in 2003 to Abdi's plan to attack a shopping mall in Columbus, Ohio. Faris had earlier signed on as a government informant after pleading guilty to providing material support to al-Qaida.

When Abdi was arrested in 2003, he agreed to an interview with the FBI and admitted to authorities that he, Faris and Paul had tried to provide material support to foreign terrorists.

Paul, however, was never charged in that specific case. The Mother Jones-Berkeley study incorrectly claims that Paul received a 20 year prison sentence for the shopping mall plot. The sentence was for the 2008 plea in a separate terrorist plot.

The court record shows that the FBI in no way blindly targeted an otherwise innocent, disinterested man. The Bureau was led to Paul through Abdi's claims, later verified against bank records, travel records, invoices and items seized in government searches.

The Mother Jones joint study also includes three sting operations from last fall as examples of government foul-play. Farooque Ahmed, who plotted to attack the D.C. Metro, Antonio Martinez, who plotted to attack a military recruitment center in Maryland and Mohamed Osman Mohamud, who tried to detonate a bomb at a Christmas tree-lighting ceremony in Portland, Oregon are all featured.

Before informants entered any of these cases, government affidavits said:

In the case of Hosam Smadi, who wanted to blow up a Dallas skyscraper, an informant was sent in after the FBI discovered disturbing posts Smadi had made in an online forum which showed his "vehement intention" to carry out terrorist attacks on American soil.

"To sacrifice in person is the best type of jihad," "Oh how I love, my brothers, to perform jihad with you in the same rank, in the same field against the same enemy" and statements of support for al-Qaida leaders like Osama bin Laden are just some examples given in a criminal complaint.

Smadi was even given several "outs" during the plot planning, but chose to proceed anyway. "…[T]ell me if you have any hesitation, doubt, or fear," an informant said to Smadi, "If that is the case, we would depart now as friends and brothers in Islam without any anger at all. In this case, you may perform Jihad in a less dangerous way…" Smadi was undeterred.

Similarly, attempted Portland tree-lighting ceremony bomber Mohamud, mentioned above, was told by an undercover informant that the plot was his choice and that he should do "what's in your heart."

None of the cases cited for the 10 percent statistic have been thrown out using the entrapment argument. That's because the courts found the defendants were "predisposed" to committing the terror related acts, the legal standard for determining whether entrapment occurred.

Even the case of James Cromitie, in which an informant offered $250,000 to the defendants to bomb a New York synagogue and shoot military planes with surface-to-air missiles, was upheld over cries of entrapment.

U.S. District Judge Colleen McMahon upheld the conviction in May, noting that Cromitie was predisposed to commit the acts, pointing to his "bragadosio" including "hours of tapes replete with Cromitie's genuinely frightening rants about Jews."

Cases like Cromitie's highlight the risks associated with using informants as a law enforcement tool. But even if one accepts the Mother Jones assertion that 10 percent of cases were snared by an agent provocateur, it is clear that 90 percent were not.

As Attorney General Eric Holder told a Muslim lawyers group in December, "Those who characterize the FBI's activities in this case as 'entrapment' simply do not have their facts straight or do not have a full understanding of the law."

And informants are one of the best tools, according to law enforcement officials, in preventing lone wolf terror attacks. FBI Director Robert Mueller warned earlier this year that lone wolf extremists "pose an equally serious threat" as al-Qaida. This month, President Obama weighed the threat from lone wolves to be greater than that from an organized al-Qaida attack.

"I think in many of these cases nothing would have happened were it not for the FBI going in and making a plot possible," Aaronson told NPR. But in a post 9/11 world, informants must be sent in before a plot is in the works with real bad guys.

Former FBI counter terrorism official Arthur Cummings told Aaronson why. "We're looking for the sympathizer who wants to become an operator, and we want to catch them when they step over that line to operator."