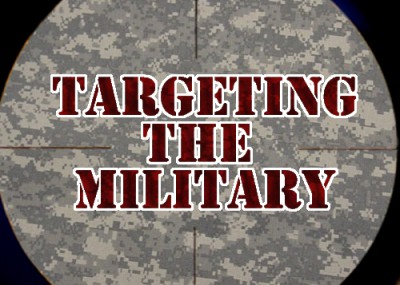 The attack on the Seattle military installation is yet another example of a terrorist plot in which American military personnel in the United States have been targeted by Islamist radicals opposed to U.S. military operations in Iraq, Afghanistan and elsewhere. In each case, the perceived oppression of Muslims by U.S. forces overseas and the belief that Islam is under attack from the West has been the primary motivation behind the plots.

Among the recent cases is the 2009 Fort Hood massacre carried out by Army psychiatrist Nidal Hasan, the killing of an Army recruiter in Little Rock, Ark earlier that year by a convert to Islam who described his actions as "a jihadi attack on infidel forces," and a Maryland man who hoped to attack a recruiting office.

Last month, Abdul-Latif (a.k.a. Joseph Anthony Davis) of Seattle and coconspirator Walli Mujahidh (a.k.a. Fredrick Domigue Jr.) of Los Angeles were arrested and charged with planning to use grenades and machine guns in an assault on the Seattle Military Entrance Processing Center (MEPS). The center recruits prospective candidates to the U.S. military, some of whom are subsequently deployed overseas.

Another person recruited by Abdul-Latif to join the conspiracy reported the plot to the FBI and became a paid informant. The informant promised to help obtain weapons for the attack. What he supplied had been rendered inert by federal investigators.

In secretly-recorded conversations, Abdul-Latif said that their attack would "deter" individuals from joining the military and inspire other Muslims to carry out similar attacks.

"Imagine how many young Muslims, if we're successful, will try to hit these kinds of centers. Imagine how fearful America will be and they'll know they can't push Muslims around," Abdul-Latif said.

The conspirators were upset about American military actions in Afghanistan, Iraq, and Yemen. Abdul-Latif criticized the U.S. military for "invading our lands…stealing our resources…locking up our brothers and sisters, you're raping our sisters in Guantanamo Bay…you're in Islamic countries and even when you're asked to leave, you won't leave…"

Abdul-Latif also confided in the government informant that he wanted to die a martyr in the attack. If that happened, his son would be proud he died fighting the "non-believers." He said he admired Osama bin Laden and argued that jihad in America should not just be a "media jihad" but also a "physical jihad."

The initial target for the attack was the Joint Base Lewis-McChord ("Fort Lewis") in Tacoma, Wash. Abdul-Latif talked to the informant about ongoing military proceedings for suspected crimes in Afghanistan by soldiers posted at Fort Lewis. He said he did not trust the legal system with providing justice for the alleged crimes.

Prosecutors say the defendants wanted to drive a "truck that looks like the Titanic" through the base's "front gate." The truck was described as a 'battering ram' that would "guard" the plotters while they carried out their "duties" (a reference to the attack). Abdul-Latif declared the "objective" of the attack was to "take out anybody wearing green or a badge."

But then the group switched plans, forgoing attacking Fort Lewis and targeting the MEPS facility in Seattle, the complaint says. Abdul-Latif served briefly with the U.S. Navy in the mid-1990s and explained to the government informant the strategic advantages of attacking MEPS: "It's a confined space, not a lot of people carrying weapons and we'd have an advantage." He also said soldiers were deployed from the MEPS facility to Iraq or Afghanistan.

The inspiration for the planned attack came from the November 2009 Fort Hood shootings by Army psychiatrist Nidal Hasan that left 13 people dead. Abdul-Latif reasoned that if a single gunman could kill 13 people, the complaint says, then three attackers could kill many more.

Like Abdul-Latif, Hasan viewed the U.S.-led war against terror as being a war against Islam. "It is getting harder and harder for Muslims in the service to morally justify being in a military that seems constantly engaged against fellow Muslims," Hasan said at a June 2007 presentation at the Walter Reed Army Medical Center.

"The US is leading the war against terrorism which in reality is a war against Islam," Awlaki said in an online posting. "Its army is directly invading two Muslim countries and indirectly occupying the rest through its stooges." Hasan has been alleged to have been radicalized by Awlaki's teachings.

Last December, 21-year-old Antonio Martinez (a.k.a Muhammad Hussain) was arrested and charged with scheming to attack a military recruiting station in Catonsville, Md., and kill as many Americans as possible.

Martinez, a U.S. national from Nicaragua and convert to Islam, was inspired by extremist Internet postings of Awlaki and radical Muslim Brotherhood cleric Omar Bakri Muhammad that justified violence against the United States in retaliation for its presence in Muslim lands.

"When American bombs Sudan, Somalia, and Iraq, and sows destruction, the Muslims have the right to retaliate." Muhammad said.

Martinez posted a statement on his Facebook account calling for violence to end the oppression of Muslims. He also publicly posted a message expressing his dislike for anyone who opposed Allah and his prophet.

Lacking the funds to travel overseas to fight jihad, Martinez confided to an FBI informant that he would "make a mujahideen here, Insha' Allah, and we gonna fight against them…until they stop the oppression…fight the disbelievers until there is no more oppression and the religion is only for Allah…"

In April 2009, four men were sentenced to life in prison and one man to 33 years for plotting to use assault rifles to kill American soldiers at the Fort Dix Army base in New Jersey. Evidence presented at the trial included secretly recorded videotapes of the defendants undergoing small-arms training at a shooting range in the Pocono Mountains in Pennsylvania.

As part of their training, the defendants also watched videos of American soldiers being killed in Iraq and Afghanistan and listened to Islamic radicals calling for jihad against the United States.

Abdul Hakim Mujahid Muhammad (a.k.a. Carlos Bledsoe), an American Muslim convert, was charged with shooting two soldiers outside a military recruiting center at Little Rock, Ark., killing one and wounding another.

In a letter to the judge, Muhammad justified the shooting as a "Jihadi attack on infidel forces."

He also declared he was affiliated with Al-Qaida in the Arabian Peninsula (AQAP), and claimed that Islamic law justifies fighting "those who wage war on Islam and Muslims."

Muhammad subsequently pleaded not guilty but has not yet been tried.

Seven individuals led by Daniel Patrick Boyd were accused of plotting an attack on a Marine Corps Base located in Quantico, Va., among other charges. Boyd also claimed to have fought in the war in Afghanistan. The indictment alleged the defendants were "prepared to become 'mujahideen' and die 'shahid'—that is, as martyrs in furtherance of violent jihad."

Other cases have seen Americans leave the country in hopes of fighting American troops in Afghanistan. Five young men from suburban Washington, D.C. are serving 10 years in prison after Pakistani authorities arrested them as they tried to join the jihad.

Law enforcement officials consider the portrayal of the war on terror as an attack on Islam to be one of the most effective messages in radicalizing young Muslims. These cases reinforce that theory, although it is not a phenomenon restricted to Islamist radicals plotting violent attacks on American military bases as retaliation for U.S. counterterrorism policies. American Islamist organizations led by the Council on American Islamic Relations (CAIR) that claim to be mainstream civil rights groups have routinely described the U.S. as being engaged in a war with Islam. For other examples, see here and here.