The World According to Amir Mertaban 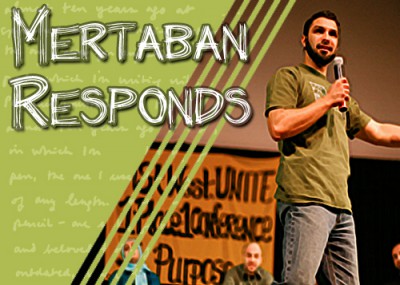 Amir Mertaban, the subject of a recent blog posting by the Investigative Project on Terrorism, wrote in to voice his complaint that the posting, and previous reports about him, take his comments out of context and misrepresent his views.

The blog posting focused on Mertaban's May 10 lecture at the University of California, Irvine. Mertaban, the article said, "repeatedly refused to answer when audience members asked if he condemned the terrorist group [Hamas] which now controls Gaza. "

Mertaban's email, which now is posted as a reader comment under the blog item, did not specify what he felt was in error. But it seemed to have hit a nerve. "You should really be afraid of what God has in store for people who lie and spread corruption," he wrote. "The Day of Judgment is near and you should really contemplate your actions before spewing hatred, lies and gossip about others!"

But he did agree to an interview in which he could state his concerns and respond to questions.

In that conversation, Mertaban said:

2. He sees no need for Muslims to call on Hamas to modify its rejectionist stand, renounce terror and agree to peace with Israel. He believes the Hamas charter, which calls for the killing of Jews and the annihilation of Israel, is no longer valid because some Hamas leaders have distanced themselves from it.

3. He acknowledges the reality of Israel as an existing nation. "But I would never recognize Israel as this, you know, I would never, I guess, look at Israel as a sovereign nation because of all the destruction that it has done. I would never say this is a democracy in the Middle East or that this is a legitimate country because of everything that it's done. Because of its record of atrocities."

4. He does not know whether Osama bin Laden was responsible for 9/11, but not because he harbors conspiracy theories. Rather, he hasn't taken the time to examine the evidence. Bin Laden said he did it, Mertaban acknowledges. If that's true, he got what he had coming when U.S. Navy SEALs killed bin Laden May 1 in Abbottabad, Pakistan.

Interview excerpts on those points can be heard below.

Mertaban, a salesman by trade, is a former president of the Muslim Students Association (MSA) West region and remains a frequent speaker at MSA events. He also is head of the Southern California region for WhyIslam, a project of the Islamic Circle of North America (ICNA).

He coaches young Muslims how to engage in dawah, which translates into "an invitation" for people to learn about the faith and even join Islam. It is not, Mertaban insists, proselytizing. His appearance at UC, Irvine was part of a week of programming coinciding with the anniversary of Israel's independence, known among Palestinians and their supporters as the Nakba, or catastrophe.

The programs were organized by the school's Muslim Student Union (MSU), considered among the most radical Muslim student chapters in the country. It was suspended from campus last fall after a school investigation determined MSU members orchestrated a plot to silence a speech by Israeli Ambassador Michael Oren, and then lied about it.

Mertaban's talk was entitled "What Israeli Going On," and mostly offered his view of the history of Jerusalem and the many conflicts in the area.

After about an hour, Mertaban reached the Palestinian-Israeli conflict and was asked whether he would condemn the Hamas charter and its anti-Israel rhetoric. Mertaban told the questioner he would deal with that at the end of his remarks. After a brief exchange, the questioner asked "Do you condemn Hamas?"

Mertaban discussed different aspects of the conflict, emphasizing misdeeds he sees from Israel's end. There has been killing on both sides, he said, advising people to do their own research. That response prompted a renewed set of questions about Hamas.

Mertaban: "Do I support Hamas? That's a loaded question."

Audience Member: "Well yes or no, it's a simple question."

Mertaban: "No, no. I'm not gonna answer that question. I answered this question for you."

Audience Member : "It's a simple question – yes or no. Do you support Hamas – yes or no?"

In the interview, Mertaban spent more than 20 minutes insisting that the IPT report was out of context when it said "refused to answer when audience members asked if he condemned the terrorist group which now controls Gaza."

Expecting a yes-or-no answer to the question "Do you condemn Hamas," is "silly," Mertaban said. He condemns its attacks on civilians in Israel, but refuses to label the entire organization as bad.

"The international community, who is not sure on whether this is a terrorist organization or a freedom fighting organization or just another political organization in Palestine," he said. "The entire international community, there's a split. So, on one side you have a heavy, pro-terrorist camp and on the other side you have a heavy pro-freedom fighter camp. So it's silly to say to someone, 'Do you support, or are you against Hamas?' Because there's an entire debate about this. So that's why I mentioned in my answer that they've done some good in the region, sure. They've had a lot of social welfare programs, sure. And they've done bad, too, sure. And I condemn what they've done that's bad. But I'm not gonna say, I'm not gonna just right out wipe out the whole organization because if they're good or bad."

Mertaban said he supports Hamas "freedom fighting missions," which he defined as defensive acts to protect Palestinian lives. Israeli civilians should be off limits, he said.

He also maintained that the Hamas charter had been invalidated by statements from Hamas leaders such as Khalid Meshaal. Yet, there has been no formal amendment or rescinding of the document and the most Hamas officials offer is an extended truce with Israel rather than full peace and recognition. Last month, Hamas leader Mahmoud Zahar said his group would accept a Palestinian state on 1967 borders, but settling all disputes would "preclude the right of the next generations to liberate the lands." Likewise, spokesman Sami Al-Zuhri insisted that the United States will never force Hamas to recognize Israel. Hamas cleric Yunis Al-Astal, also a member of the Palestinian parliament, predicted Palestinians "will have the honor of annihilating the evil of this gang" and once the Jews are massacred, Palestine can be the capital of a Muslim Caliphate.

Asked if Muslims should challenge Hamas to alter its tone and embrace peace and co-existence, Mertaban seemed confused about the need. "Look, Muslims around the world aren't this big organized group of people that have some sort of dictating power over anyone," he said.

The problem is not Hamas, he said, which might be willing to accept Israel "if Israel was some peaceful loving country where it's willing to be a good neighbor to its neighboring Palestinian state. The exact opposite is true. So, I mean, if you asked me if I recognized the state of Israel in all of its harm and whatever, sure, it's a country that is there, that's operating. But I would never recognize Israel as this, you know, I would never, I guess, look at Israel as a sovereign nation because of all the destruction that it has done. I would never say this is a democracy in the Middle East or that this is a legitimate country because of everything that it's done. Because of its record of atrocities."

Asked if there was any other example of an existing country threatened with annihilation by a terrorist group that is treated credibly by other countries, Mertaban said, "I don't know of any. No."

The talk had nothing to do with bin Laden, he said, and the isolated clip made him look like a supporter. The presentation focused on dawah, and was offered in concert with WhyIslam. Mertaban offered tips for discussing Islam with non believers, often invoking sales techniques about when to talk and when to listen. The bin Laden reference did come in out of the blue, so Mertaban was asked what he meant. In 2007, did he question what Osama bin Laden had done?

"I mean, I think in 2007, I think there's still a legitimate amount of people even today who question what he's done. I think I'm not one of those people," he said. His point was "that in Islam, we have this sense of camaraderie and brotherhood and sisterhood. Even with murderers and rapists and so on and so forth. Even those people actually get a trial and get to be hung by Muslims themselves in an Islamic environment. So, if bin Laden, for example, was truly convicted of what he did and he was found out to be in that matter, our support with him would be to bring him to justice and to basically implement justice on him because of what he's done."

Was bin Laden responsible for 9/11?

"I don't know," Mertaban said, although that's "probably because of laziness or whatever."

He acknowledges bin Laden claimed credit for the 9/11 attacks and that there may be evidence to prove that is true. "But I'm not gonna claim anything until I've seen a significant amount of evidence in front of me." 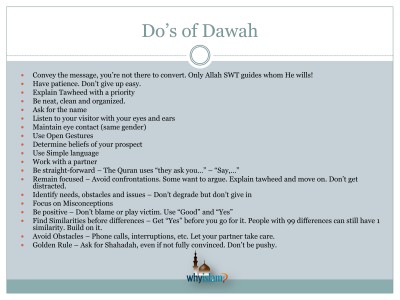 Finally, Mertaban disputes the IPT's assertion that WhyIslam is a proselytizing program. Part of that assessment is based on a WhyIslam training slide, "Do's of Dawah," currently on the group's website. Though the first point advises people to "Convey the message, you're not there to convert," the penultimate act is an invitation to join Islam. "Golden Rule," it says, "Ask for Shahadah, even if not fully convinced. Don't be pushy."

The Shahadah is a statement of faith required of any new Muslim. "I don't know why it's stated like that," Mertaban said. "Our rule is not to convert." The purpose is to clear up misconceptions about Islam. He emphasized the first point, that "you're not there to convert," leaving out the part that says only to convey that as a message.

"The majority of people never do" ask for the Shahadah, he said. "It clearly says don't convert."

Must be trained by the US state dept

These kind of vague beating about the bush answers are similar in kind to the US govt is giving on "loaded" questions about Pakistan.

Even after catching Osama in Pakistan's heartland, the US govt is tying itself in knots on whether Pak is a terrorist nation. Nor has the Headley trial got their collective heads out of the sand.

Reminds me of Japanese govt after Hiroshima; how to surrender without making the emperor say that word.

Unfortunately for the people of Nagasaki, by the time the jap govt figured it out, it was too late.

It may happen to US, by the time you acknowledge that Pak is a terrorist supermarket it may be too late for some US city.