Durbin: Hearing was My Idea

Illinois Sen. Dick Durbin is denying a report that his recent hearing on anti-Muslim bigotry was triggered by a request from a radical mosque outside of Chicago.

The Daily Caller reports that people associated with the Mosque Foundation in Bridgeview, Ill. said the hearing was a result of Durbin having "listened to the concerns" of a mosque committee. As the Investigative Project on Terrorism reported, Durbin visited the Mosque Foundation last month, posing for a photograph with its leaders. Among them were two people tied to terror-financing operations by federal prosecutors.

Durbin's office issued a statement to the Daily Caller denying the hearing was prompted by a Mosque Foundation request. "The hearing has been long-planned and was first discussed internally late last year in response to stories about Quran [Koran] burnings and discrimination involving building permits for mosques."

But in a Twitter posting by Zaher Sahloul, who heads the Council of Islamic Organizations of Greater Chicago, praised Durbin, saying he "fulfilled his promise to @CIOGC and is holding hearings on Muslim civil rights. Good man who deserves our support." 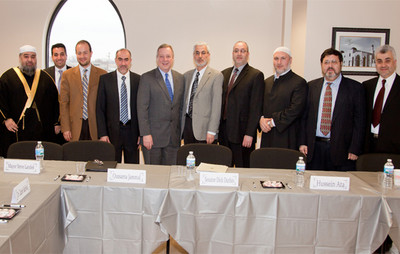 Durbin's office also minimized the significance of his meeting with two men – Kifah Mustapha and Jamal Said – who prosecutors say were part of a Hamas-support network in the United States. He meets with thousands of people each year, he told the Daily Caller. In a subsequent statement, he said that "American Muslims are entitled to the same civil rights as any other American, including the right to participate in the political process and meet with their elected officials."

No one said otherwise. In this case, the question is whether it's beneficial to embrace people with a history of radicalism in trying to combat anti-Muslim sentiment.