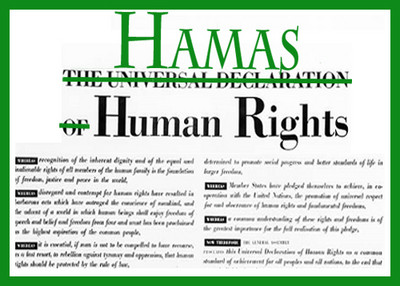 A leading American Muslim charity routed millions of dollars illegally to Hamas. An international convoy and flotilla campaign to deliver aid to Palestinians supports the Hamas government in Gaza.

Their advocates insist they want nothing more than to ease the suffering of the Palestinian people.

A review of Hamas' actions since seizing control of Gaza in 2007, however, shows the group is creating suffering. In addition to refusing to renounce terror and recognize Israel as necessary first steps for peace negotiations, it has imposed a steadily intensifying clampdown on perceived morals crimes, beaten and killed alleged foes without trial and deliberately placed civilians in harm's way.

Recent reports blame Hamas for the collapse of reconciliation talks with the secular Fatah, which controls the West Bank, and describe a Hamas arms build-up featuring rockets capable of hitting Tel Aviv. While the United States continues to push for peace talks and propose a peaceful, two-state solution to the conflict, Hamas officials repeatedly have made it clear that an end to conflict is not part of their agenda.

In an interview last month with Reuters, Hamas leader Mahmoud Zahar said the Palestinian state must replace Israel and pledged to continue the "shaheed project" through violent jihad.

Human rights groups have catalogued many of the severe social restrictions Hamas enforces in Gaza. Most of the religious crackdowns in Gaza have targeted women.

Germany's Der Spiegel offered an example of the situation in a recent article about a water park that was shut down by arson in September. Hamas had issued warnings to the management after women were seen smoking water pipes at the Crazy Water Park. The park also drew scrutiny for games and other social activities in which men and women touched.

After a third episode, a group of more than two dozen masked men came, beat and tied up the guards and set the park on fire. "They keep people anxious and scared, and they silence any criticism of Hamas," Der Spiegel quoted an unnamed Palestinian observer. It described in-fighting among Hamas officials over the degree that Islamic law should be enforced.

The hard-liners seem to be prevailing. In May, Human Rights Watch Middle East and North Africa Executive Director Sarah Leah Whitson wrote to the Hamas interior ministry asking about morality rules and their enforcement by the mabahith, or security forces. She described a series of cases in which people were questioned, and sometimes physically abused, about extramarital relationships.

One man said an officer "blindfolded him, punched him in the chest, and beat him with a leather-wrapped bamboo cane on his buttocks for approximately 50 minutes, insisting that he confess to having had extramarital affairs," Whitson wrote. Another man described being detained on suspicion he engaged in a homosexual act, claiming that "he was subjected to torture, including falaka [foot whipping], and pressured to confess, as well as forced to reveal the names of other men and boys with whom he had had relations."

He was never charged.

In his interview with Reuters, Zahar defended the draconian approach. "Is it a crime to Islamize the people?" he asked. "I am a Muslim living here according to our tradition. Why should I live under your tradition? We understand you very well, you are poor people. Morally poor. Don't criticize us because of what we are."

Zahar also lashed out at what he saw as immorality in the West. "You do not live like human beings," he said. "You do not [even] live like animals. You accept homosexuality. And now you criticize us?"

Journalist Khaled Abu Toameh has his own questions in response. "Women in the Hamas-controlled Gaza Strip have been facing a campaign of intimidation and terror that has forced many of them to sit at home and do nothing," he writes. But that has not generated any campaign of outrage in the international community or among rights groups and advocates.

"Has anyone dared to ask Hamas why sending women to carry out suicide bombings is all right, while it is not ok for them to walk alone on the beach or be seen in public with a man?" Abu Toameh writes. "Have 'pro-Palestinian' groups in North America and Europe ever thought of endorsing the case of these women by raising awareness to their plight?"

Those suspected of opposing Hamas or of secretly collaborating with Israel face a far harsher fate, though often without any judicial protections. An April 2009 Human Rights Watch report documented 30 extra-judicial killings in the previous year. Another 29 Gaza residents were killed by Hamas security or unidentified gunmen in the midst of the Israel's Operation Cast Lead incursion starting in December 2008, the Palestinian Centre for Human Rights claimed. Nine deaths resulted from severe beatings or torture.

The Human Rights Watch report detailed a series of incidents in which Hamas critics were shot in the legs. It quotes Hamas spokesman Taher al-Nunu justifying the brutality. "The government will show no mercy to collaborators who stab our people in the back, and they will be held accountable according to the law," al-Nunu said.

Hamas Prime Minister Ismail Haniya promised in 2006 "to promote the rule of law, the respect for the judiciary, the separation of powers, the respect for human rights, the equality among citizens; to fight all forms of discrimination; to protect public liberties, including the freedom of the press and opinion," the report notes. But that isn't happening.

Instead, Hamas has remained true to its goals as outlined in its 1988 charter: to establish a Muslim state based on Jihad, and to propagate the concept of Jihad in all aspects of life.

"When our enemies usurp some Islamic lands, Jihad becomes a duty binding on all Muslims," the charter says. "In order to face the usurpation of Palestine by the Jews, we have no escape from raising the banner of Jihad. This would require the propagation of Islamic consciousness among the masses on all local, Arab and Islamic levels. We must spread the spirit of Jihad among the [Islamic] Umma, clash with the enemies and join the ranks of the Jihad fighters. The 'ulama as well as educators and teachers, publicity and media men as well as the masses of the educated, and especially the youth and the elders of the Islamic Movements, must participate in this raising of consciousness. There is no escape from introducing fundamental changes in educational curricula in order to cleanse them from all vestiges of the ideological invasion which has been brought about by orientalists and missionaries."

The Meir Amit Intelligence and Terrorism Information Center issued multiple reports proving Hamas used Gaza residents as human shields. Among the examples are reports showing rocket fire coming from Palestinian schools, in residential neighborhoods, and showing how similar locations and mosques were used as weapons storehouses. Some reports were backed up with video examples.

In January, Human Rights Watch categorically dismissed a Hamas argument that the rocket fire was aimed at military targets.

"Hamas can spin the story and deny the evidence, but hundreds of rockets rained down on civilian areas in Israel where no military installations were located," said Joe Stork, deputy Middle East director at Human Rights Watch. "Hamas leaders at the time indicated they were intending to harm civilians."

Since the fighting ended in early 2009, Hamas reportedly has re-armed through a vast network of smuggling tunnels along the Egypt-Gaza border. A senior Israeli intelligence official said Hamas has "rockets which are reaching 70 and 80 kilometers (45 to 50 miles) in the Gaza Strip ... so it means that we can sit here and talk and a rocket can fall on our heads within five minutes."

For investigating those tunnels, Hamas jailed British journalist Paul Martin earlier this year. Zahar declared him "guilty of being an agent for Israel."

Life for Palestinians in Gaza has not improved since Israel's unilateral withdrawal in 2005. Most western critics still blame Israel for this, pointing to the economic embargo imposed on the territory after Hamas took over and kidnapped Israeli soldier Gilad Shalit. But any fair examination shows much of the wound is self-inflicted. There is nothing in Hamas' short-term agenda that places improving the quality of life for its people above its stated goal of destroying Israel.

It irks me to no end when I read about these people whining for more money. How many billions of dollars have the US, the EU and the Arab peoples throughout the world donated to the Palestinian cause? How much did the PLO, Fatah or Hamas pour into building a proper infrastructure; hospitals and schools? Not much! What they didn't spend on rifles and ordinance they spent it on fattening their international bank accounts; building large personal villas; driving luxury cars. The guy in the street meanwhile had to sell his wife's dowry for food. That was only a couple of years ago too. I'm geting this from an Egyptian journalist who regularly reports on the Middle East. Arafat could have had a Palestinian state years ago. His arrogance like Fatah's and Hama's have denied their people sovereignty. So excuse me while I refuse to support the Turkish flotilla brigade or the poor Palestinian causes, which appear to be based primarily on violence, negativity and just general stupid arrogance. If it were anyone but Israel or the US, those boats would have been at the bottom of the Mediterranean. I have a lot of issues with the Zionists but not with the Israeli people in general. The Zionists persecute their own people and there are more than enough starving Jewish children who haven't received any international help or assisstance. It just seems that the world has this double standard. I can't wait to leave this idiotic dimension.