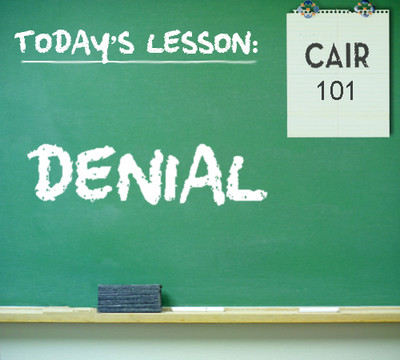 Jews were expelled from Europe "because they betrayed, stole and corrupted these countries," a senior Hamas official said in recent comments. Mahmoud Al-Zahar predicted Jews face a similar fate in Israel.

"But they have no place here amongst us because of their crimes," the Jerusalem Post's Khaled Abu Toameh quotes Zahar saying. "They will soon be expelled from here and we will pray at the Aqsa Mosque [in Jerusalem]."

It's bluster, but Zahar's comments call for the elimination of an existing state and the death or exile of millions of Jews. They clearly cross the line between criticizing Israel and rank anti-Semitism. As such, they should be condemned by Muslim organizations which claim to stand against bigotry.

Had the roles been reversed and an Israeli official predicted Palestinians "will soon be expelled from here," the chorus of condemnation would be unyielding and understandable. But Zahar's remarks aren't even generating a discussion, certainly not from the Council on American-Islamic Relations (CAIR).

Like the Muslim Public Affairs Council and other American Islamist groups, CAIR is quick to demand condemnations for statements they consider bigoted or intolerant of Muslims. MPAC and CAIR have specific programs to highlight cases of what they call "Islamophobia." But they tend to hold their tongues when a Muslim leader engages in hate speech.

Comments far less threatening or bigoted send the American Islamist outrage machine into overdrive. After news analyst Juan Williams admitted feeling anxiety traveling with some Muslim passengers, CAIR last month demanded that NPR "address the fact that one of its news analysts seems to believe that all airline passengers who are perceived to be Muslim can legitimately be viewed as security threats."

But don't expect much when the roles are reversed. Helen Thomas, the venerable White House correspondent who resigned shortly after issuing a call similar to Zahar's – that Jews should "go home" to Germany, Poland and "get the hell out of Palestine" – has been honored by two national organizations since then.

The Arab-American Anti-Discrimination Committee and CAIR gave Thomas awards, though each group claims the move was more of a lifetime achievement recognition and not an endorsement of her comments.

Similarly, CAIR stays silent on anti-Semitic rantings by Muslim Brotherhood spiritual guide Yusuf al-Qaradawi, who advocates for terrorist attacks against American troops and Israeli civilians. CAIR's references to Qaradawi hold him up as a "renowned Muslim scholar" and a moderate. Last month, Qaradawi boycotted an interfaith meeting because Jews were participating.

In 2009, he cast the Holocaust as Allah's punishment against Jews. "Throughout history," Qaradawi said, Allah has imposed upon the [Jews] people who would punish them for their corruption. The last punishment was carried out by Hitler. By means of all the things he did to them – even though they exaggerated this issue – he managed to put them in their place. This was divine punishment for them. Allah willing, the next time will be at the hand of the believers."

A few days earlier, Qaradawi said his dying dream was to die shooting Israelis. "I'd like to say that the only thing I hope for is that as my life approaches its end, Allah will give me an opportunity to go to the land of Jihad and resistance, even if in a wheelchair. I will shoot Allah's enemies, the Jews, and they will throw a bomb at me, and thus, I will seal my life with martyrdom."

While such comments draw no attention from American Islamist organizations and their leaders, the groups do find time to advocate for Hamas as a legitimate representative of the Palestinians. In September, CAIR-Michigan Executive Director Dawud Walid criticized the latest U.S.-effort to resume Israeli-Palestinian peace talks because Hamas was not invited.

"Now how in the world can there be a realistic discussion about peace talks when the entity which represents the elected government of the Palestinian people during a fair election that was monitored by international inspectors, including former president Jimmy Carter is not at the peace table?" Walid asked at a rally. Later, he tried to deny his reference was to the terrorist group, telling a reporter "I didn't even mention the word Hamas."

In 2005, CAIR-Canada called on officials to condemn remarks made by an Israeli consul official who said most terrorists are Muslims and that most Muslims support extremism. Earlier this year, CAIR sided with University of California, Irvine students who plotted to disrupt a speech by Israeli Ambassador Michael Oren, and then lied to school officials about it.

Internal documents obtained by the Investigative Project on Terrorism show the plan was to shut the speech down, not just make clear the students had a different point of view. "[O]ur goal should be that he knows that he cant (sic) just go to a campus and say whatever he wants," meeting minutes in which the disruption was discussed say. Members were advised to "push the envelope," in order to "realize our role as the MSU of UCIrvine."

In January, CAIR's Los Angeles chapter demanded that a Lancaster, Calif., city council member be condemned for a Facebook posting about Islam and honor killings it considered bigoted and uninformed.

Court documents link CAIR and its founders to a Hamas-support network in America, a connection the group vehemently denies. But the FBI, which gathered the evidence, has said in writing that it cannot consider CAIR a reliable liaison partner "until we can resolve whether there continues to be a connection between CAIR or its executives and HAMAS."

Here's a chance for action. Condemning Zahar's remarks should be a no-brainer – a first step that moves toward calls for Hamas to revoke its anti-Semitic charter calling for Israel's destruction and agree to peace talks. If the self-anointed spokesmen for America's Muslims can't do that, then they live with the record they've established.

Failure to do so is hypocritical and yet another example of why the FBI is right – for the media, for politicians and anyone else – CAIR is not "an appropriate liaison partner."