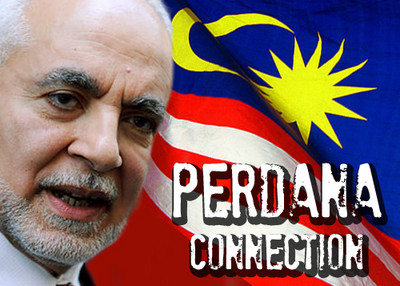 That includes a three-year association with Mohamad's Perdana Global Peace Organization, which kicked off a December 2005 conference with Mohamad saying the United States invaded Iraq in 2003 because it "it was about getting at the wealth of a country rich in oil" and implying a U.S. role in the assassination of Lebanese Prime Minister Rafik Hariri.

While Rauf now says he only attended Perdana's December 2005 conference, the organizations' web site listed him just below Mohamad from 2005 to 2008. During that time, Perdana's website shows Mohamad met with activists who believed the 9/11 attacks were set up by the U.S. government and conducted more conferences in which he "congratulated" Iraqi insurgents for killing U.S. soldiers.

Mohamad, one of Rauf's advisers on world peace, implied the United States played a role in the 2005 assassination of former Lebanese Prime Minister Rafik Hariri after the U.S. government passed a law in 2003 calling for sanctions against Syria. "Fortuitously, Rafik Hariri of Lebanon was assassinated and Syria is implicated," Mohamad said. "Whether the findings are factual or not is irrelevant. I am not being cynical but remembering the lies about Iraq. I cannot help but wonder."

Rauf, the leader of the Ground Zero Mosque effort, has worked for years with Mohamad, records show. Those ties came long after Mohamad earned a reputation for making anti-Semitic comments. For example:

Rauf had at least a three-year association with Mohamad's Perdana group, whose website also features reports of meetings with believers in a 9/11 conspiracy.

From 2005 through 2008, Rauf was listed on the group's website, just below Mohamad's, according to the group's records and website.

Perdana records show that Rauf spoke at the December 2005 Perdana Global Peace Forum and signed the group's "Kuala Lumpur Initiative to Criminalise War" as the second signatory immediately below Perdana leader Mohamad. Also attending that forum were George Galloway and Yvonne Ridley, two leaders of the group Viva Palestina, which actively supports the Hamas-led government in Gaza. Ridley, a British former journalist, converted to Islam after being kidnapped by the Taliban in Afghanistan in 2001.

During an August 2005 appearance at a Chautauqua Institute conference in New York, Rauf announced that he had just returned from meetings with Mohamad with ideas of how Malaysia could play a larger role in the Middle East peace process. Perhaps, Rauf said, Malaysia could send troops to help patrol the border between Israel and the occupied West Bank and Gaza. Or Malaysia could help train police in Iraq, Rauf told the group.

"This is not true, that is an absolute lie," Rauf said. "I was invited to a lecture. They had a conference in December 2005, and I was invited there to lecture. That is the extent of my relationship with Perdana."

The Cordoba Initiative's website, in a recently added section, also says Rauf is not a member of Perdana: "Imam Feisal Abdul Rauf has never been a member of this group. Several years ago, Imam Feisal was invited to Malaysia, the most moderate Islamic country in the world, to participate in a Peace Conference sponsored by the Perdana Peace Group. He was one of the hundreds of speakers present. He has no political, advisory or business affiliation of any nature with the Perdana group. A photo of Imam Feisal was taken at the conference, and this has been used to 'prove' his membership in the Perdana Global Peace Organization, but the allegation is false. Because of the controversy surrounding Perdana, we have requested the Perdana Group to remove the photo of him from their publicity."

Neither Rauf nor the Cordoba site explains why he was listed as a senior Perdana official for three years on its website or why the group still lists him as a "role player and contributor." There is no evidence that Rauf ever asked to his name removed from the Perdana site or dissented from Mohamad's comments at the December 2005 conference.

Also, the Perdana site listed a February 2006 release about Rauf working to calm the violence caused by the publication of the image of the prophet Mohammed in a Danish newspaper.

Most of the controversial material on the group's website is attributable to comments made by Mohamad, who was Malaysia's prime minister from 1981 to 2003. During his final years in office, Mohamad was dogged by allegations of anti-Semitism. He blamed the 1997 Asian economic crisis on foreign currency traders and a Jewish economic cabal led by financier George Soros.

By 2005, when Rauf joined the Perdana group and met with Mohamad to discuss Middle East peace, Mohamad's reputation for anti-Jewish and anti-Israel comments had long been established. Among the examples:

A June 2006 story on the Perdana site highlights a meeting Mohamad had with representatives of a group aiming to start a "real investigation" into the cause of the 9/11 terrorist attacks in New York, Washington and Pennsylvania. The collapse of the World Trade Center towers in New York, the group said, was not caused by the two airliners that crashed into them; instead, the Reopen 911 group said, there is "evidence that the towers came down in a controlled demolition."

Last week, the Investigative Project on Terrorism exposed videos and essays showing a former officer in ASMA, Rauf's organization serves on the board of Muslims for 9/11 Truth and founded a group called the Muslim-Jewish-Christian Alliance for 9/11 Truth. Each argues the attacks were "an inside job."

Judge Mohamad was then an appellate court justice for Malaysia. Since then, he became Malaysia's Supreme Court chief justice and serves as a member of the Shariah Advisory Council of Securities Commission Malaysia.

Ghazi is the author of a document posted on the Pakistani Supreme Court's website called "The Role of Judiciary in the Promotion of a Culture of Tolerance." The essay lauds the role of the Supreme Court in Pakistani society, nearly above all other social institutions, but contains anti-Western passages. Ghazi leads his essay by describing the current state of disunity in Islam, caused in large part by Western powers:

"These difficulties have been further accentuated by the injustices being
done to the Muslims around the globe. Western powers have adopted
double standards; one for dealing with Muslims and the other, for
dealing with non-Muslims. Every such policy further reassures the
Muslim masses that the present world order has been conceived,
developed and adopted only to curb and control Muslims and to ensure
that their ideals and aspirations are frustrated."

In June 2008, Cordoba held a conference in Kuala Lumpur in conjunction with the Institute of Diplomacy and Foreign Relations and Ministry of Foreign Affairs of Malaysia, agencies of the Malaysian government. The conference was titled the Third International Conference on the Muslim World and the West: Bridging the Gap. Malaysian Prime Minister Abdullah Ahmad Badawi officiated and spoke at the conference.

Badawi later visited the ASMA offices in New York in late 2009, according to an email update found on the ASMA website.

In December 2008, Rauf briefed a group of scholars at the offices of the International Institute of Islamic Thought about the findings of the Shariah Project, according to IIIT. The Virginia-based IIIT was founded by Muslim Brotherhood members who helped underwrite a Tampa front that housed four members of the Palestinian Islamic Jihad governing board.

Rauf and his wife Daisy Khan attended another conference in Kuala Lumpur in July 2009, according to links on the website for the conference, the Women's Islamic Initiative in Spirituality and Equity (WISE), which was sponsored by ASMA.

During that conference, Rauf was interviewed by The National, a newspaper published in the United Arab Emirates. That interview focused on the Shariah Index Project, which Rauf announced on the last day of the WISE conference in Kuala Lumpur. The story said the Shariah project had been quietly in the works since 2006 with "behind-the-scenes meetings with scholars, activists and government officials."

Rauf also said, "We have been soliciting the opinion of scholars throughout the Muslim world, asking them what defines an Islamic state, from the point of view of Islamic law." The National noted the Cordoba Initiative has offices in both New York and Kuala Lumpur and "it is funded by the Malaysian government and other sources in both western and Muslim countries."

As IPT reported on August 26, a 2009 financial statement for ASMA showed it received $576,312 from the government of Qatar. ASMA and Cordoba say money for Cordoba often goes through ASMA.

The information above is TRUE !

I am a Malaysian and I can confirm that the info above, especially the link between that terrorist imam and the Malaysian government is true !

The Malaysian government supports islamic terrorism. It even has its armed forces - the Royal Malaysian Army - to teach the terrorists ways to make bombs.

If that is not all, Malaysia also bought arms from North Korea and ship them to the Taliban and many other islamic terrorist groups all over the world.

And if THAT is not all, in the recent United Nation assembly, the prime minister of Malaysia - himself implicated in the C4 BOMBING DEATH OF A MONGOLIAN WOMAN - is officially offering his help to Hussein Obama in ways to "fool the Americans to accept Islam".

The news above have been widely covered in all the Malaysian news channels - from newspapers to TV to Malaysian websites/blogs.

So watch out, Americans !

Watch out for more lies from Hussein Obama, for he is being helped by a bloody islamic murderer from Malaysia !!!

We have to remember that Obama and his minions thought they would have ruined America's economy far earlier.. they are running behind.. the OIC conference in Chicago has seditionist and treasonists inside America...

I live near the 9-11 mosque and see that the Islamists are getting riled up already.. More and more women are covered in BURKAS in August heat. Men in their pajama outfits.. They think they are in a more powerful position.

We need to be ready to fight the fight because our politicians had no right to hand our nation over to this enemy within..

Shariah and Western law are not compatible. Can someone please explain to me why an American is carrying out a project that rates Shariah compliant nations, and is in essence promoting the implementation of Shariah? Rauf certainly appears to be an Islamist, and since he chooses to live in this country, I can only assume that he desires this nation to become an Islamic nation.

Just as the 'professionals' didn't investigate Obama prior to his election, they have likewise left the real journalism on Imam Rauf to IPT and a few other concerned patriotic organizations. The TV News shows should compensate IPT for the excellent investigative work.