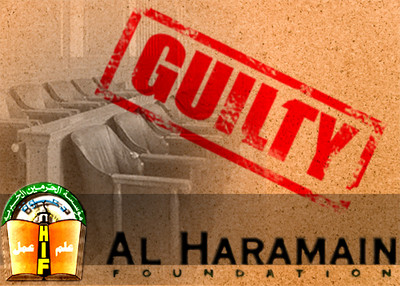 After a week-long trial, a federal court in Eugene, Oregon has convicted Pete Seda, the founder of an Islamic charity accused of funneling $150,000 to Chechen mujahideen.

Seda, also known as Pirouz Sedaghaty, was charged with conspiring to move money out of the United Sates without declaring it, as required by federal law, and with filing false tax returns to hide the fact that the money ever existed. According to federal officials, Seda accepted a large donation intended to support "our Muslim brothers in Chychnia," and then surreptitiously shifted the money to Saudi Arabia in the form of difficult to trace traveler's checks.

"The lifeblood of terrorism is money—if we can stop the flow of money to violent extremist organizations, we'll be safer both here and abroad," U.S. Attorney Dwight C. Holton said in a statement. "By lying to the IRS about where this money went, the defendant sought to hide the true destination of this money." Holton continued, "The jury's verdict demonstrates once again the critical role—and effectiveness—of civilian criminal courts in the battle against terrorism."

During the trial, officials described how they lost track of the money when it was deposited in Saudi Arabia, but they suspected that it eventually made its way into the hands of Chechen rebels. Prosecutors had argued that Seda had a "dark side," one that was "insistent on helping the cause of the mujahideen covertly, secretly, and without leaving a paper trail."

Seda came under the scrutiny of U.S. law enforcement because of his leadership within the U.S. branch of al Haramain Islamic Foundation (AHF), an international organization that has been banned by the United States, Saudi Arabia, and the United Nations for its support of international terrorist organizations. During the trial, Assistant U.S. Attorney Chris Cardani told jurors that "al Haramain subscribed to a very violent form of Islam." He told the jury that the organization supported "violent jihad…aggressive, kill people jihad."

Knowing of the organization's role in the global terrorist support structure, Seda opened up the American branch of al Haramain in Ashland, Oregon. Despite attempts by the defense to paint Seda as a man dedicated to interfaith dialogue and peace building, the government presented witnesses who describe the "darker" side of the defendant.

Former congregants of AHF detailed how they would occasionally hear fiery prayers denouncing the United States and Muslim integration in the West. A former employee, Daveed Gartenstein-Ross, explained that it was his job was to distribute moderate materials to non-Muslims, but to provide "true believers" with copies of the "Noble Quran," which contained an appendix entitled, "A Call to Jihad: Holy Fighting in Allah's Cause," extolling the righteousness of violent jihad. Gartenstein-Ross also testified how he had distributed Mohammad bin Jamil Zino's "Islamic Guidelines for Individual and Social Reform." In the book, Zino explains:

"Jihad is obligatory on every Muslim in two ways: by spending one's wealth or offering oneself for fighting in the cause of Allah."

The conviction of Pete Seda is only the most recent in a string of examples of charities financing terrorism, and it demonstrates the lengths to which terrorist organizations will go to hide their illicit activities. The case serves as a reminder of the fact that while there are many charitable institutions operating legally, others funnel money to terrorist organizations under the guise of humanitarian assistance.

Sentencing is set for November 23. Seda was remanded into the custody of federal marshals following the verdict.

If Jihad is obligatory to every muslim, assuming that only 10% of the billions poured in to Paksitan goes to the Jihadists to killing American troops in Afghanistan, that is still a 1000 more than the amount mentioned in the article.