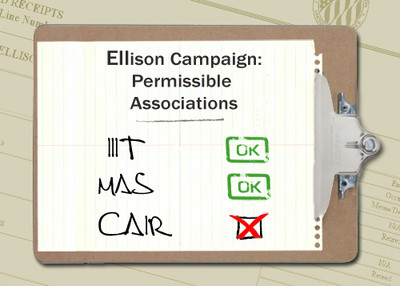 He is a fairly entrenched incumbent in a district drawn favorably for his party. That fact has helped U.S. Rep. Keith Ellison (D-MN) raise more than $650,000 in his bid for a third term in Congress. That amount includes $173,000 in political action committee contributions from interests ranging from organized labor to health insurers and trial lawyers.

That's understandable. Tucked in among those contributions, however, are a handful of donors with a history of Muslim Brotherhood connections. For example, Ellison accepted $950 in contributions from Jamal Barzinji and another $1,000 from Hisham Al-Talib. And in late March, the Investigative Projec t on Terrorism has learned, Ellison attended a private fundraiser at the northern Virginia home of a man who led a group tied to the Muslim Brotherhood.

Barzinji and Al-Talib have served as vice presidents at the International Institute of Islamic Thought (IIIT), a Northern Virginia think-tank federal authorities suspect was part of a terrorist financing network. In addition, a previous FBI investigation concluded that Barzinji and Al-Talib were among U.S. leaders of the Muslim Brotherhood when they came here as students.

The Brotherhood, which also is called the Ikhwan, is an Egyptian-based religious/political movement that seeks to establish Islamic law as "the basis controlling the affairs of state and society." Documents from an FBI investigation from the late 1980s show Barzinji included among "members and leaders of the IKHWAN." He was the secretary general for the Islamic Society of North America (ISNA) at that time.

ISNA was founded by Muslim Brotherhood members in the United States, records from that FBI probe and other investigations show.

Investigative records and trial exhibits also show that the organizations donors Barzinji and Al-Talib have been involved in and have helped finance criminal organizations including the Holy Land Foundation for Relief and Development and a think tank that served as refuge for at least four members of the Palestinian Islamic Jihad's governing board during the early 1990s.

The IIIT was part of a network of Islamic companies and charities long suspected of financing terrorism. It was a principal financier of the World and Islam Studies Enterprise (WISE), a think tank run by Palestinian Islamic Jihad board member Sami Al-Arian. Fellow PIJ board members Basheer Nafi and current Secretary General Ramadan Shallah worked at the WISE think tank in the early 1990s through visas Al-Arian helped secure.

In 1992, IIIT President Taha Jaber Al-Awani wrote to Al-Arian, saying he considers Al-Arian's think tank "an extension" of IIIT. "When we make a commitment to you or try to offer," Al-Awani wrote, "we do it for you as a group, regardless of the party or the façade you use the donation for."

According to an affidavit filed in connection with a 2002 search of the IIIT and related companies, the letter noted that others at IIIT, including Barzinji and Al-Talib, shared his assessment.

During a 2000 rally, Omeish praised Palestinians for "choosing the jihad way" to liberation.

He also received money from two men who were officers in the American Muslim Council (AMC). Its founder and longtime executive director, Abdurrahman Alamoudi, pled guilty to illegal transactions with Libya that included a plot to kill a Saudi crown prince. Alamoudi was a Muslim Brotherhood member.

Ex-AMC President Mohammed Cheema has given Ellison $1,250 for the 2010 election. When President Bill Clinton invited novelist Salman Rushdie to the White House in 1993, Cheema wrote to the President saying the move showed "a disregard for the feelings of 7 million American Muslims." At the time, Rushdie faced a fatwa issued by the Ayatollah Khomeini for his novel, The Satanic Verses.

It isn't clear why Awad would play such a supportive role, yet not be listed as a donor to Ellison's campaign. It may be that, of all the Islamist groups mentioned, CAIR may be the most politically risky today.

CAIR appears to be the subject of a federal grand jury probe and has been frozen out by the FBI out of concerns over the organization's ties to Hamas. An FBI official explained the cut off in a letter last year. In February, a Department of Justice official spelled out the evidence in a Hamas-support trial that justified naming CAIR as an unindicted co-conspirator.

Ellison remains close to CAIR nonetheless. He spoke at three CAIR fundraising dinners last year and took to the House floor to defend the organization after another member made critical statements about the group.

Last fall, Ellison berated a Muslim critic of Islamist organizations such as CAIR and MAS. Rather than taking on specific criticisms made by American Islamic Forum for Democracy founder Zuhdi Jasser, Ellison accused him of fomenting bigotry against his own people.

"I think people who want to engage in nothing less than Muslim-hating really love you a lot because you give them freedom to do that. You say, 'yeah, go get after them.'"

Politicians of all stripes deny being influenced by those who contribute to their campaigns. Contributors, they often say, want nothing more than good government and expect nothing in exchange for their money. Perhaps. In his two terms, Ellison has demonstrated repeated support for Islamist organizations and their issues, even serving as an attack dog against an anti-Islamist Muslim who advocates for the separation between mosque and state.

These contributions are a small slice of Ellison's campaign war chest and hardly constitute the difference between a third term or defeat. By seeking them out, the congressman makes clear that he sees himself not as a representative of all American Muslims. Just like-minded Islamists.

As a lifelong (almost) Democrat, it is more than a bit sad to watch as the party of Roosevelt, and Truman, and Kennedy remains more committed to political correctness than to America. The "Investigative Project" helps disclose the truth. I would describe it in a slightly different manner: Do we remain a constitutional republic guided by the American Constitution, or do we surrender to a primitive value system rooted in the seventh century?

The book "JIHAD" by French scholar Gilles Geppert brings out the Muslim Brotherhood connection which was started in Egypt many years ago. This is a very objective book and is researched very well and is worth a read. My concern is that people, like Ellison, are not distancing themselves from radical groups like the Muslim Brotherhood. Ellison needs to be questioned as to whether or not he would support building a Christian Catheral in the Middle East as a symbol of peace. Nothing is ever mentioned about discrimination in Muslim countries but our laws are used to promote the quasi political-religious movement. History has proven that Islam refuses to coexist with any other religion and that they will discriminate while demanding their "regligious rights" in America. Ellison, like Obama, espoused support for militant Black groups then changed their tune when running for national 0ffice.

If you are a Minnesotan voting in the 5th District, it is time for you to forget all about your former party affiliations and from this moment on consider yourself an American first. As an American, do you want to see the nation our children inherit a bastion of freedom and opportunity, founded on principles of free speech, free thought? Or do you want them to inherit a country controlled by Islamic Imams and led by Jihadists? That is an honest, straightforward question. Which do you want for your children?

Next, take a long, hard look at who has been representing you in Congress. It is an old saying, and one that rings true every time, that "If you show me who your friends are I'll tell you who YOU are." Congressman Keith Ellison has chosen his friends and they have chosen him. He accepts funds from organizations which aim to turn America into an Islamic state. His donors include groups like the Muslim Brotherhood, whose purpose is to instate Sharia in our courts and replace our freedoms and our Constitution with Islam. He is beholden to them and stands with them.

We hear from our leaders that we should not regard all Muslims as "jihadists" or lump them together with so-called "extremists". The question is, if they are not in tune with jihad or Muslim extremism, then where are those who differ with that? Do we hear from them when an atrocity is committed by these jihadists? We see a lot of dancing in the streets and celebration by our "Muslim brothers" when 3,000 innocent Americans die in an unprovoked attack in New York City, but where are those good Muslim Americans and decent Muslim peace-lovers who denounce such an attack? They are mostly silent. Many of them profit by living in America and enjoying our opportunities here, but when we are attacked we do not hear dissent from jihad from them. An exception might have been Zuhdi Jasser, founder of the "American Islamic Forum for Democracy" (see above). And did Congressman Ellison endorse his criticisms and concerns - or even address them? No. He did not. He attacked Jasser instead, for not standing with Islam. Islam equals anti-American values in Ellison's mind. And HE, Ellison, stands with Islam every time.

Back to the question. It does not matter whether you usually vote for a Democratic or Republican ticket. It matters only whether youwant to see fundamentalist Islam and Sharia imposed on our America. If you prefer, instead, to live under the US Constitution which guarantees the freedom of men and women in America, you need to reject the candidacy of Keith Ellison. Also reject Keith Hakim, for this man uses other names. Ever wonder why this is? Your first and best opportunity to say "no" to institutionalized Islam in America is to vote in the Primary in August. DO NOT FAIL TO VOTE IN THE PRIMARY. You have the option to vote against Ellison and for BARB DAVIS WHITE, who does NOT intend to usher in Sharia, nor to accept financial contributions from anti-American organizations set to undermine our country's security. She will NOT support Jihad. She WILL SUPPORT the American Constitution and American law.

Regardless of your erstwhile party affiliation, vote in the DEMOCRATIC primary in August and eliminate Keith Hakim Ellison from further consideration for Congress. Unless, of course YOU, TOO, support Jihad.

I agree with you Marc. Vote the infiltrator out.

Then stop whining on and on and on about it all the time... for crying out loud.. get rid of Ellison and crush any other terror funders and supporters and eradicate us all of these killers..