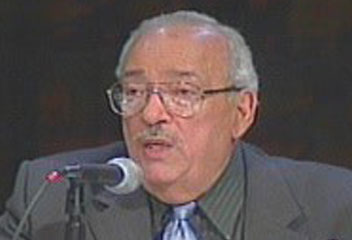 Maher Hathout is the Senior Advisor and one of the founders of the Muslim Public Affairs Council (MPAC). As reflected in his views quoted below, he can be seen as an apologist for extremism and terrorism.

Hathout delivered a lecture at the State Department in 1997 in which he discussed emerging Islamic trends. Among the reformists he cited were Hassan al-Banna, Rashid Ghannoushi and Hassan al-Turabi. They advocated a pluralistic society that would work for peace and justice for all, he said, but they been ignored, despite the fact that ‘they represent the masses and speak their language.'"[1]

These examples of people Hathout sees as "reformists" are, in reality, extremists.

Hassan al Banna founded the Muslim Brotherhood, a fundamentalist Sunni movement dedicated to resurrecting an Islamic Caliphate. According to al-Banna, "It is the nature of Islam to dominate, not to be dominated, to impose its law on all nations and to extend its power to the entire planet."[2] Al-Banna gave the group the motto it still uses today: "God is our purpose, the Prophet our leader, the Quran our constitution, jihad our way and dying for Allah our supreme objective."[3] Hamas and Al Qaeda have roots in the Muslim Brotherhood[4] while Palestinian Islamic Jihad was founded by breakaway Brotherhood members.[5]

Rashid Al Ghannoushi was the head of Tunisia's banned Islamic fundamentalist Al-Nahda Party and was convicted by a Tunisian court of responsibility for a bomb blast that blew the foot off a British tourist. [6]

Hasan al-Turabi was the head of the National Islamic Front, which the U.S. government has condemned for supporting terrorism, launching a genocidal war in southern Sudan, and for continued human rights violations. Turabi also gave Osama bin Laden sanctuary in Sudan. [7]

Hathout has justified Hizballah violence, saying in 1998: "The whole country keeps condemning Hizballah; I disagree with them on other issues, but on the issue of fighting to liberate their land and attacking only armed forces, this is legitimate, this is an American value - freedom and liberty."[8]

In May 2001, Hathout said "… the United States is also under Israeli occupation… [and] we have a Congress that beats the Knesset in being pro-Zionist."[9]

Then, days after the 9/11 attacks, Hathout encouraged a conspiracy theory that the hijackers' identities were being falsified. During a chat at the IslamOnline website, a writer claimed one hijacker was alive and well while a second had been dead for more than a year. Hathout praised the writer for "providing unique information that needs to be more known and verified. Please call the Minaret magazine…"[10]

Click here to see Hathout on the subject of Israel.

[6] Michael Binyon, "Britain Shuts Door on Fundamentalists," The Times, January 5, 1996. Note: According to The Sunday Telegraph, Ghannouchi was "rounded up with several thousand other opponents of the Tunisian government following an alleged plot to assassinate the country's president, Ben Ali, in 1991." See: Con Coughlin, "Senators fight to keep sheikh out of the US State Department told of Islamic fundamentalist's alleged links with terrorism," Sunday Telegraph, May 22, 1994