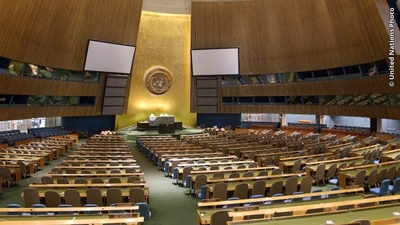 When Francesca Albanese was nominated to be the next United Nations special rapporteur for Palestinian territories last February, critics feared her well-established anti-Israel bias would taint her work.

"Francesca Albanese completely fails even the minimal standards of impartiality and objectivity," said UN Watch Executive Director Hillel Neuer, "because this is an individual who has quite simply devoted her life to militant advocacy against Israel, as even a fleeting glance at her social media and public statements reveals. She's the very opposite of impartial."

Her actions since then have only strengthened the argument.

The rapporteur is supposed to be an independent expert appointed by the UN Human Rights Council and tasked with investigating human rights conditions in Palestinian areas. According to UN provisions, special rapporteurs are expected to demonstrate "impartiality." The selection procedure dictates that there should not be "any reason, currently or in the past, that could call into question the candidate's moral authority and credibility."

This is not the case with the current special rapporteur.

Israeli officials protested her appointment last spring, saying they don't "expect any fair, objective, [or] professional treatment from an activist who promotes outrageous libels, compares the Holocaust to the Nakba, and advocates for the de-facto destruction of the Nation State of the Jewish People."

In December, Albanese downplayed Palestinian terrorist activities when she referred to Abu Hamid, a founder of Fatah's al-Aqsa Martyrs' Brigade who murdered seven Israelis, merely as a "Palestinian refugee from Al-Amar Camp, West Bank" who "was sentenced to life imprisonment in 2002, for alleged involvement in attacks against ISR forces during the 2nd Intifada."

Albanese took part in the conference, "16 Years of Siege on Gaza: Impacts and Prospects," organized by the Council on International Relations Palestine (CIR Palestine).

CIR Palestine is a think tank that promotes Hamas views, including the "full liberation of Palestine," meaning Israel's destruction. In a 2021 communique, CIR Palestine announced that "the Palestinian people will continue their struggle and resistance to the occupation until liberating the entire Palestinian land and achieving their rights undiminished, using all means available and legitimate." This wording is similar to the Hamas covenant: "Israel will exist and will continue to exist until Islam will obliterate it, just as it obliterated others before it."

The December event Albanese addressed featured Hamas spokesman Abdul Latif Al-Qanu and Hamas members Basem Naim, Ghazi Hamad and Isam Al-Da'alis, as well as Palestinian Islamic Jihad members Ahmad Al-Mudallal and Khader Habib. Other participants included Maher Mezher, a member of the Central Committee of the Popular Front for the Liberation of Palestine (PFLP), who has called for terrorist attacks against Israel in the West Bank with knives, guns and Molotov cocktails.

In her address, Albanese, told Hamas and Palestinian Islamic Jihad members that "resistance against Israel is your right."

The UN special rapporteur's worrying views are not an isolated incident, but part of a continuum of anti-Israel bias in that office. In 2008, the then-UN rapporteur described Palestinian terrorism as an "inevitable consequence" of Israel's actions, while his successor had even blamed the 2013 Boston marathon bombing on "the American global domination project" and "Tel Aviv."

The issue at hand is whether this institutional framework is used to promote unfounded claims and opposition to Israel in general. Characteristically enough, Israel is the only country for which a permanent investigator has been assigned by UN authorities. No investigator has ever been assigned for human rights violations in Turkish-occupied Cyprus or the Russian-occupied parts of Ukraine.

It seems that the Israeli concerns about the new UN official were well founded. An overview of Albanese's social media activities and public appearances by the Times of Israel demonstrate a strong anti-Israeli bias, disregard for Israeli security concerns and alignment with views and propaganda tropes espoused by Islamist terrorist groups.

In a recently submitted report to the UN General Assembly, Albanese speaks of "gross violations of international law, including racial segregation and subjugation by the occupying Power, Israel." She reiterates the oft-repeated, but unfounded claim that Israel – the one actual democracy in the Middle East – is an apartheid state that discriminates against Palestinians: "systemic and widespread discriminatory Israeli policies and practices against the Palestinians amount to the crime of apartheid under international law."

She describes Israel's creation in the context of "settlements of foreign people implanted among the indigenous population" and of "a native Palestinian Arab population" as opposed to "largely European Jewish settlers and refugees from Europe," in order to promote the notion that Israel is a colonialist state founded on historically Arab land.

In fact, more than half of Israel's Jewish population is comprised of people whose families were forced out of Arab and North African states following its 1948 founding.

In an open letter posted during 2014 fighting between Israel and Hamas, Albanese lashed out at the United States and European Union for supporting Israel's right to defend itself against unceasing Hamas missile, rocket and mortar fire on civilian centers.

"America and Europe, one of them subjugated by the Jewish lobby, and the other by the sense of guilt about the Holocaust, remain on the sidelines and continue to condemn the oppressed — the Palestinians — who defend themselves with the only means they have (deranged missiles), instead of making Israel face its international law responsibilities," Albanese wrote.

In response to all these revelations, Michèle Taylor, the U.S. ambassador to the UN Human Rights Council, wrote that the Biden administration was "appalled by [the] recently uncovered antisemitic remarks ... References to the 'Jewish Lobby' are an age-old trope; this is outrageous, inappropriate, corrosive, & degrades the value of the UN."

The UN has remained silent on this issue.

Due to her remarks, Israeli authorities still have not allowed Albanese to enter the country or the Palestinian territories.

The case is just the latest in a pattern of inherent anti-Israeli bias within UN agencies. Previous UN special rapporteurs have described the situation in Palestine as "apartheid" in reports that were well received by Islamist-affiliated Palestinian think tanks.

Other UN agencies, such as the Human Rights Council, have constantly demonstrated bias against Israel. The previous UN High Commissioner for Human Rights, Michelle Bachelet, issued 14 comments against Israel during her tenure compared to only six against China.

She did not react when a member of her office spoke of a "Jewish lobby" and went even as far as to question Israel's right to be a United Nations member.

The credibility of an agency like the UN Human Rights Council suffers when it focuses on Israel while ignoring far more pernicious, systematic human rights abuses in countries like China, Cuba and Venezuela. Since 2015, the council has approved 99 resolutions condemning Israel, more than twice the number of timed it condemned Syria, and more than seven times it condemned Iran. Tellingly enough, it issued no resolutions against China or Turkey.

It seems that the UN agencies continue unhindered their unique anti-Israel bias presenting a distorted view of the Israeli-Palestinian conflict that indirectly legitimizes terrorist actions and continuing violence against Israel and its citizens.