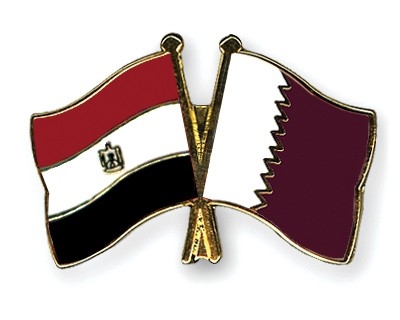 The Qatari government has supported Islamist movements, namely the Muslim Brotherhood, financially and politically since the Arab Spring revolutions broke out a decade ago. But with the Brotherhood routed, Qatar seems to have decided that it's time to mend ties with the Egyptian government.

Things changed last year when Egypt, Saudi Arabia, Bahrain and the United Arab Emirates ended a three-year boycott of Qatar due to its support for the Muslim Brotherhood and other Islamists in Egypt. During that time, shipping and air travel to and from Qatar was cut off.

The reciprocal visits mark a continuation of the warming relations.

"There was a build up to it. This is not the result of a sudden move today, but with Prince Tamim showing up in Egypt a few months ago, and Saudi Arabia and the Emirates relaxing their grip on Qatar and restoring ties, it had to come," Egyptian-Canadian political[scientist Azza Sedky told the Investigative Project on Terrorism.

Al-Sisi was elected president in 2014, a year after the Egyptian military ousted Islamist President Mohamed Morsi. Qatar responded by saying it supported the Egyptian people's choices but it has still supported the ousted Muslim Brotherhood politically and through its media outlets such as Al Jazeera.

In the years since, Qatar has pushed Egypt to reconcile with the Brotherhood, even offering to mediate. Al-Sisi refused, with his Foreign Minister Sameh Shoukry calling the offer an "[u]nacceptable interference in Egyptian internal affairs." He added that there is no room for negotiation or acceptance of external mediation for a dialogue with the Brotherhood.

"Al-Sisi's visit to Qatar has entirely ruined the Muslim Brotherhood plans," said Mousa. "I want to see a single man from the Brotherhood commenting on this visit." He described the visit as a "death certificate of the Brotherhood."

There is no guarantee that Egyptian-Qatari relations will stay solid.

"Qatar has sided with the Muslim Brotherhood for so long that we can't assume a complete change in thinking, Sedky said. "Still, Qatar was dealt a difficult blow when all those countries cut ties with Qatar. No wonder it would like to return to normality."

Egypt, led by al-Sisi, defeated a large Islamist wave of terrorism that struck the country after President Hosni Mubarak's 2011 ouster. The wave intensified following the ousting of President Mohamed Morsi in June 2013 following a popular revolution against Islamist rule.

"Still, it's a big thing for President al-Sisi to go to Qatar that soon. However, the timing of the trip is a different matter altogether," Sedky said. Al Thani issued a statement after the meeting claiming that Qatar doesn't have any relations with the Muslim Brotherhood.

"This relationship does not exist, and there are no active members of the Muslim Brotherhood or any related groups on Qatari soil," Al Thani said. "We are an open country and a large number of people with different opinions and ideas pass through it, but we are a country and not a party, and we deal with countries and their legitimate governments, not with political organizations."

Al Thani's message is a far cry from his 2013 statement supporting the Muslim Brotherhood.

"Supporting the Muslim Brotherhood is a duty and we don't need no thanks for it," Al Thani said during a 2013 meeting in Doha. Leaders of the Syrian Muslim Brotherhood and Hamas political leader Khaled Meshaal were present. A year earlier, Al Thani was the first foreign leader to visit Morsi. Qatar gave Egypt a $2 billion loan at the time to prop up its struggling economy.

Qatar nurtured the Muslim Brotherhood for decades and was the country of residence for the group's radical spiritual leader Yusuf al-Qaradawi, who died last month in Doha. Qaradawi was known to issue death fatwas against his opponents.

Qaradawi's fatwas include calling for attacks on Egyptian soldiers who ousted Morsi. He received a life sentence in absentia in 2018 by Egyptian courts in connection with the assassination of several Egyptian officers. Other Qaradawi fatwas legitimized suicide bombings and called for assassinating former Libyan leader Muammar Qaddafi.

Qatar used Al Jazeera, its news propaganda news network, to bolster the image of Islamists and bash anti-Islamist movements in the Middle East. Egyptian authorities cracked down on Al Jazeera's Egyptian affiliate in 2013 and closed the TV network offices.

Despite Egypt's calls, dating back to 2014, for Qatar to extradite a number of Muslim Brotherhood members, Sedky believes that Egypt didn't press this issue lately to advance the recent reconciliation.

"Chances are that Egypt hasn't called on Qatar to extradite the MB elements. Egypt has more vital issues to think of than phasing away MB presence in Qatar. As long as Qatar and whoever remains on its soil don't wreak havoc or cause disruption in Egypt, Egypt won't pursue this," Sedky said.

There is still a high level of distrust between the Egyptians and the Qataris, but economic factors remain a major part of the negotiations. Al-Sisi's Doha visit resulted in several economic agreements, including a deal on shipping.

Egypt's economy is reeling under the effects of the looming global economic recession and the Russian invasion of Ukraine. Egypt could use all the foreign investments it can get. Egyptian media reports anticipate $20 billion in new Qatari investments within the next few years. An initial $5 billion investments will go to food industries, real estate sectors, transportation and logistics companies.

"The Egyptian economic woes could be a factor in the timing," said Sedky. "The visit was coming, but the timing was in connection with the economic issues."

Despite the reconciliation efforts with Qatar, few expect Egypt to go nearly as far with Turkey – another country that has supported and provided refuge to the Muslim Brotherhood over the past decade. Still, there have been rapprochement efforts from Turkish President Recep Tayyip Erdogan.

"Egypt, at this point, will gain nothing from letting bygones be bygones with Turkey. If there is a gain, I'm sure Egypt will willingly forget Turkey's role in Syria, Libya, etc., but not for the time being. And the MB presence in Turkey is still very prominent," said Sedky.

The silence from the Muslim Brotherhood's known commentators is an indication that most of the bashing and criticism against the Egyptian state on the past decade was done with the blessings of the Qatari ruling regime who possess their switch button. Priorities and policies, however, can change. Qatar's main goal at the moment is not the interests of the Muslim Brotherhood, but attempting to cut its losses created by past support for the group.

"They (MB) will always side with Qatar and view its policies as right." Sedky said, "Then they have to assume the visit was agreeable. However, if, for any reason, things change, the MB will swiftly return to their old ways."