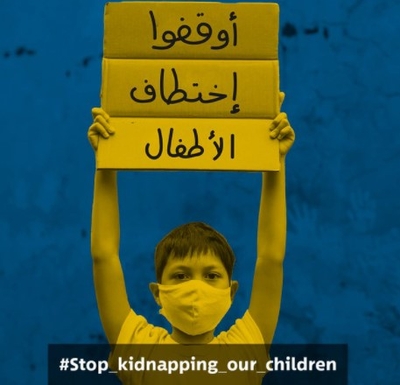 Sweden's child protection system is the latest target of malicious Islamist rumors. Children removed from their families' homes due to abuse and neglect concerns are really being kidnapped and indoctrinated, Islamist websites and videos claim.

"When kidnapped, this Muslim child after being denied of his family, he will either turned to be an atheist or a Christian," Muslim Brotherhood cleric Mohamed Al Sagheer claimed in an interview last month with Turkey- based Channel 9.

Sweden's Care of Young Persons, or LVU law, has been in effect since 1990. It gives social workers the power to remove children from the home "based on a significant risk of harm to the child's health or development. Official Swedish government reports state that there are 9,034 cases of state-ordered child care in 2020. It isn't clear how many of those children are Muslim.

A social media campaign in Arabic with a hashtag "Stop Kidnapping Children" went viral. Sweden's Islamist Hizb ut Tahrir chapter also engaged in the campaign, slamming the law as a "policy of hostility and hatred towards Islam and Muslims ... to pressure us Muslims to abandon some provisions of Islam."

The rumor spread widely through other Islamist and Muslim Brotherhood outlets. Children who have been in government care, they say, tell their parents they now are atheists who eat pork, which is forbidden for Muslims.

"We can't be silent towards what is happening [in] Sweden now against children. Four years were enough to brainwash him, wipe his identity and talked into not coming back to his family. By God this is heartbreaking," radical Palestinian cleric Magdy al-Moghrabi wrote, retelling the story of a man whose son was taken from the home.

The Islamist website Shoun Islamiya (Islamic Affairs), which is believed to be operated by the Muslim Brotherhood, spread rumors through a series of articles and videos claiming that Swedish authorities are kidnapping, and even enslaving, Muslim children.

Shoun Islamiya is characterized by spreading hatred and incitement against the West as well as anti- Semitism with articles that reject all forms of western life from watching TV to studying abroad. Conspiracy theories, such as why the West desires to limit the Muslim population, characterize most of the radical website articles.

The campaign "escalated sharply" last month, "and in comment sections, there are now calls for terrorist attacks or threats directed against authorities," said Mikael Tofvesson, an operations manager at the Swedish Psychological Defence Agency (MPF).

Sweden called the allegations disinformation by radical Islamist imams. The Swedish Ministry of Foreign Affairs vehemently defended the social services as protests were held in front of the Swedish parliament in Stockholm and in the city of Gothenburg.

"Swedish social services do not kidnap children," a Ministry statement said. "All children in Sweden are protected and cared for equally under Swedish legislation, including the UN Convention on the Rights of the Child."

A Pew Research Center report of 2017 estimated the percentage of Muslims in Sweden to be around 8.1 percent or over 800,000 Muslims of the total population of 10 million. The number of Muslims have only grown since then. Sweden has been one of the largest receivers of immigrants in the Western world since the late 1960s but authorities have encountered problems integrating some of the new immigrants into the Swedish society. This became more challenging in the decade between the years 2011-2021 when the country received over 900,000 new immigrants.

"Islamists are disguising their failure to integrate in Western societies, and their refusal to respect European legislation, by waging a counter-attacking campaign, accusing Sweden of kidnapping their children," UK-based Egyptian writer Nervana Mahmoud told the Investigative Project on Terrorism. "While, in reality, what Sweden is doing is applying their laws on residents in their country."

The disinformation campaign should be countered by "exposing their [bad] behaviors, like beating children, encouraging their children to preach to other Muslims at school, advocating underage marriage, etc."

An important part of the campaign is the new Nyans Partiet (Nuance Party). Founded in 2019 by Mikail Yüksel, a Swedish politician of Turkish descent, the party has maintained relations with Turkey's Islamist government and the Gray Wolves, a far-right Turkish group..

Yüksel joined the protests against the government's child protective services, and though he acknowledged the disinformation that characterized the campaign, he insisted that Swedish authorities practice discrimination.

But not all Muslims in Sweden endorsed these hate campaigns. TheSwedish Imam Council and United Islamic Associations denounced the vicious campaign and urged Muslims not to follow it.

"Imams should do their best to counter the spread of hate speech, inform their followers of the seeds of discord that are sown in society and how to contribute constructively to positive change," they wrote.

Sweden is credited as a global pioneer in childcare. In 1979, it became the first country in the world to abolish any form of corporal punishment for children.

Spreading rumors against enemies is a tactic used by Islamist groups for years. In 1947, for example, a police officer stopped a group of Muslim Brotherhood members from holding an unlicensed protest in front of a Cairo police station. A rumor spread that the police officer ripped a copy of the Quran in the process, triggering a riot in which the officer was killed. Brotherhood founder Hassan al-Banna refused to condemn the murder, calling the officer's actions "unwise."

Decades later, the Brotherhood still uses rumors to attack its foes. Many spread on social media and can involve daily-life matters such as raising tariffs and taxes, while more ludicrous ones claim a fee must be paid to pray in a mosque.

Sweden still faces challenges integrating new immigrants in its society, and that task is proving more difficult as Islamist groups spread misinformation. That said, Sweden is not the first country to be subjected to vicious Islamist rumors that are based on disinformation and certainly it will not be the last.