The Strange Alliance Between Russia and Chechen Jihadists 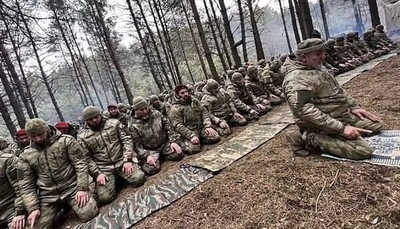 As Russian casualties in Ukraine continue to mount, numbering in the thousands, Moscow is turning to Syrian and Chechen Islamic fighters as strategic assets. "We do believe that the accounts of them, the Russians, seeking Syrian fighters to augment their forces in Ukraine," Defense Department spokesman John Kirby told reporters Monday. "We believe there's truth to that. [...] we're in no position to refute the accounts that they might be seeking to recruit Syrian fighters."

Chechnya is a land-locked region located in the North Caucasus, a member republic of the Russian Federation, a strictly conservative state with a majority of Sunni Muslims. Chechnya attempted to form a breakaway independent state after the 1991 dissolution of the Soviet Union. Russia suffered a humiliating defeat in 1996, which was reversed by a fierce crackdown in 2000. The Russian authorities went on to establish a pro-Russian regime in 2003, managing to gain the support of a great faction of Chechen warlords.

Ramzan Kadyrov, the Chechen strongman and close Putin ally, has served as head of the Chechen Republic since 2007. The Kremlin-backed leader has imposed strict Islamic social norms encouraging polygamy and promoting dispatch of his Islamic fighters abroad.

Known in Russian as Kadyrovtsy, those fighters have been deployed in special operations in Lebanon, Georgia and Syria as strategic assets of Russian foreign policy. They have also taken part in counterinsurgency cooperation programs between Russia and China.

Many are veterans of the wars in Afghanistan and Syria, earning reputations for a ruthlessness and discipline that make them feared fighters.

As many as 10,000 Chechens are reported to be fighting for Russia inside Ukraine. Chechen Rosgvardiya (National Guard) troops were spotted north of Kyiv on Feb. 27 advancing through the Chernobyl nuclear exclusion zone toward the Ukrainian capital and again north of Kyiv.

Chechen fighters took part in the 2014 Russian-backed secession of Ukraine's eastern provinces. Now, they expected to play the role of assassins, saboteurs and military police in Ukraine's main cities after an eventual victory of the Russian forces. Specifically, Chechen commandos were tasked with assassinating the Ukrainian President Volodymyr Zelensky.

In 2016-2017, Kadyrov's Chechen fighters were deployed in Syria as security personnel and military police and, in effect, as proxies of Russia's foreign policy. Russia used the Chechen Islamic authorities and networks in a bid to spread its influence among Syrian Muslims. In the city of Homs, residents were amazed to see "Russian soldiers performing Islamic prayer rites in the street." With these carefully organized initiatives, Russia wants to appear as a benevolent post-imperial power that can affiliate itself with both Christian and Muslim populations under its "protection."

According to some unverified reports, there are also an estimated 200-300 Chechens fighting for Ukraine as well. The confrontation between Russia and Ukraine has even caused a kind of rift among Chechens, as some Chechens currently active in Syria have denounced Kadyrov's forces and expressed their intention to fight against Russia.

"The Chechens fighting with the Russian army are apostates," an unnamed jihadi told Al-Monitor. "They have departed from the religion of Islam, even if they claim to be Muslims who fast and perform the five daily prayers. They are siding with an enemy who openly shows enmity against Islam. Volunteering in the Russian army is blasphemy and apostasy, let alone participating in a destructive war against Ukraine."

Pro-Russian fight in Ukraine as jihad

The supreme mufti of Chechnya, Salah Mezhiev, has equated the Russian invasion in Ukraine with jihad in defense of Allah. "Those who die in this war will be martyrs, there is no doubt about that," he said.

On Feb. 25, a huge rally was held for pro-Russian fighters in Chechnya's capital, Grozny. More than 70,000 Chechen volunteers were ready and willing to fight for Russian in Ukraine, Kadyrov said. Chanting the Islamic war cry Allahu akbar, the Chechen fighters prepared themselves for the fight against the Orthodox Christian people of Ukraine.

Kadyrov announced the first Chechen losses in Ukraine in a March 1 Telegram post.

"Unfortunately, there are already losses among the natives of the Chechen republic. Two died, six more sustained various injuries," Kadyrov wrote, still striking a confident tone. "Don't interfere. We won't stop. We have an order, we have jihad!"

By using experienced Islamic fighters, Russia can avoid the fact that many Russian soldiers are reluctant to fight effectively against the Ukrainian people and their morale is flagging due to fierce Ukrainian resistance. The Russians hope that the Chechen fighters, skilled in irregular warfare, will prove to be more resilient against the Ukrainian resistance, especially in the urban centers, drawing on their expertise from Syria.

Russia is the only state in the world to occupy directly or indirectly territory of four other states: It has occupied Crimea and parts of eastern Ukraine since 2014. It also is present in Trasnistria, a part of Moldova, Abkhazia and South Ossetia in Georgia in the South Caucasus, and the southern part of the Kuril Islands of Japan. If the Russian invasion in Ukraine and its aggressiveness vis-à-vis other states of Eastern Europe remains unchecked, there shall rise a menacing new landscape of insecurity and disruption of the international order.