Aafia Siddiqui and the Misguided Support for Women of Jihad 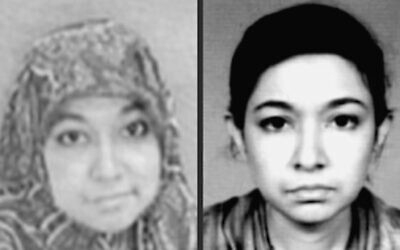 When a jihadist terrorist stabs, shoots, and attempts to behead infidels, the Western media often assure us that he is either mentally ill or a lone actor.

The Colleyville hostage-taker, Malik Faisal Akram, may have worked alone, but surely was acting on behalf of an ideology. He was one of many violent jihadists and Islamist organizations who have been demanding the release of "sister" Aafia Siddiqui for a long time.

Jihadist/Islamist groups, including al-Qaida, the Taliban, and ISIS, have "named their vehicles, and driven in convoys to Syria, in honor of Siddiqui. American Islamist groups, such as the Council on American-Islamic Relations (CAIR), have been campaigning for her release for a long time.

Paradoxically, left-liberal Western feminists have also been mesmerized by the women of jihad. Even after – perhaps especially after – 9/11, such thinkers viewed America as having deserved 9/11 because it had a heavy hand in creating the mujahideen who became the Taliban.

Enter, Aafia Siddiqui, the hero of our current drama.

But who is she? Like Osama bin Laden, Siddiqui came from an educated and well-to-do family. She obtained advanced degrees in neuroscience from MIT and from Brandeis. At the same time, Siddiqui was heavily veiling, teaching other women, especially converts to Islam, to do likewise. She also told them to stop shaking hands with men. She joined the infamous Muslim Student Association—and then visited a center in Brooklyn, Al Kifa, which was "widely known as the main recruiting office for jihad in the United States." Al-Kifa had a Boston chapter and Siddiqui volunteered there.

Siddiqui also kept marrying the wrong men – a first, allegedly abusive husband, (who claimed that Aafia had become a "fanatic"), and a second husband, Ali Abdul Aziz Ali aka Amar Al-Baluchi, a nephew of Khalid Sheik Mohammed. Al-Baluchi was also imprisoned at Guantanamo for "facilitating the 9/11 attackers, acting as a courier for Osama bin Laden."

In 2008, Siddiqui turned up in Afghanistan. She had in her possession bomb-making formulas and plans for mass casualty attacks which targeted the Empire State Building, the Statue of Liberty, Wall Street, and the Brooklyn Bridge. She was found "loitering" near a mosque and someone called the police about a possible suicide bomber.

One of the officers shot her in the stomach and rendered her unconscious. According to Petra Bartosiewicz at Harper's Magazine, her family claims she was then tortured. Or not. Bartosiewicz does admit that Siddiqui was actually "seeking sanctuary with the Taliban."

Siddiqui has revealed herself to be an inflamed Jew hater. Her trial opened with a demand that her jury be genetically tested to ensure that there were no Jews among them. Her conviction was met by an outburst that it was "a verdict coming from Israel and not from America. That's where the anger belongs."

She reportedly wrote to President Obama, telling him the "cruel, ungrateful back-stabbing of the Jews ... caused them to be mercilessly expelled from wherever they gain strength. This why 'holocausts' keep happening to them repeatedly!"

Yet this rabid hate wasn't enough to give pause to her defenders in CAIR and among leftist feminists.

Is moving in Islamist circles, becoming a rabid Jew and America hater, a form of feminist resistance to misogyny? Or a protest against the way Muslim girls and women are normatively abused in rural Pakistan and Afghanistan?

Do Western feminist academics, activists, and journalists see her as another Leila Khaled, who hijacked planes for "Palestine?" Or as someone who was "innocent" because she was mentally ill and easily manipulated into becoming a terrorist?

One might view Siddiqui skeptically, perhaps even with pity, given her long sentence and the hard time she has allegedly had in federal prison.

One Western journalist went as far as comparing her to Ayaan Hirsi Ali in a dual biography.

Journalist Deborah Scroggins' book, Wanted Women: Faith, Lies, and the War on Terror: The Lives of Ayaan Hirsi Ali & Aafia Siddiqui was reviewed glowingly not once but twice in the New York Times.

Which of the two women do you think Scroggins prefers? The brave pro-Enlightenment feminist Hirsi Ali, or the Islamist and terrorist Siddiqui? Scroggins finds a "weird symmetry" between the two. Of all the false moral equivalencies with which I am forced to live, this one rankles quite a bit. But Scroggins sees them both as "rebels," as sister-equivalents. As I wrote when the book first came out:

"(Siddiqui's crimes do) not bother Scroggins as much as Hirsi Ali's 'imperiousness' and 'egomania' does that, and the fact that Hirsi Ali accepted a perch at the (conservative) American Enterprise Institute. From Scroggins' point of view, the fact that Hirsi Ali has embraced universal human rights, outlined a pro-Western critique of political Islam, and supported the war in Iraq renders her something of a war criminal."

Hirsi Ali is indeed "wanted" – but by misogynist Islamists whom she opposes. She requires security at all times. Siddiqui, aka "Lady al-Qaida," was also "wanted" and is now in prison for attempting to kill American soldiers in Afghanistan.

In 2003, the FBI "named her as the only known female operative of al-Qaida." After her 2010 conviction, Manhattan U.S. Attorney Preet Bharara stated that, "As a unanimous jury found beyond a reasonable doubt, Aafia Siddiqui attempted to murder Americans serving in Afghanistan as well as their Afghan colleagues. She now faces the stiff consequences of her violent actions."

Siddiqui was sentenced to 86 years in prison. In a sense, Hirsi Ali also has a lifetime sentence – and is in danger from her own family for allegedly bringing shame upon them with her Western ideas and critique of Islam and terrorism.

Hirsi Ali has just now initiated a new group: CLARITY (Champions for Liberty and Against Islamist Tyranny), a global coalition founded by Muslims, ex-Muslims, academics, and activists, who "study Islam and Islamism, support liberty for all, especially girls and women, reject anti-Semitism, and reject the use of the term Islamophobia because of its anti-blasphemy implications."

I am proud to be a founding member of this potentially real resistance movement.