Selective Memory: The Carefully Excised "WHY" of the 9/11 Attacks
American media won't speak its name – "Islamist terrorism' – but the historic 9/11 Commission Report does and always will

"But the enemy is not just 'terrorism,' some generic evil. This vagueness blurs the strategy. The catastrophic threat at this moment in history is more specific. It is the threat posed by Islamist terrorism – especially the al Qaeda network, its affiliates, and its ideology." – The 9/11 Commission Report, p. 362, July 2004 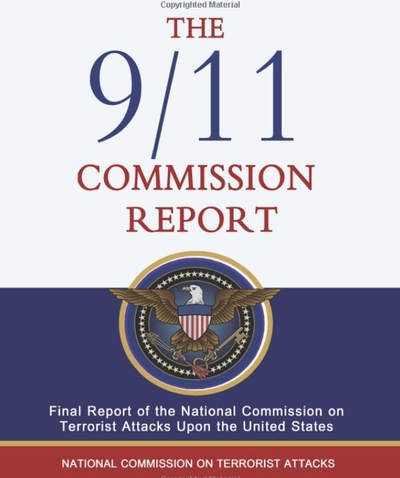 In the American media's impressive production output of 20th anniversary 9/11 retrospectives this past week, a grand omission is now glaring: Why "they," the hijackers and al Qaeda, did it. The short answer is: they did it out of religious conviction to their interpretation of Islam.

A case in point for selective media amnesia can be found in this story based on the Flight 93 recovered cockpit recordings. It reconstructed heart-rending recollections of conversations between loved ones on the ground and the 40 bravely insurgent passengers. Largely omitted in commemoration coverage was any reminder that the same recordings offered a glimpse into a hijacker's state of mind at an authentic moment of truth. Nine times over that flight's final six seconds before it nosedived into a Shanksville, Pa. field, from 10:03:02.7 to 10:03:09.2, he chanted:

Only by the most acrobatic of intellectual yoga did major U.S. media dodge civic obligation to remember and explore the religious motive that drove the 9/11 hijackers to mass murder. Media outlets like the New York Times, the Washington Post, USA Today, and the majority of major city newspapers and online outlets mostly danced lightly past their duty to remind a younger generation that thousands of Islamist fanatics at home and around the world harbor the very same religious ideology and still endeavor to kill them the next time.

A highly nimble USA Today, for example, pretzel-twisted itself under, over and then around having to mention that motivating religious animus by posting a story with the subhead "Eight influential Muslim Americans discuss how 9/11 and Islamophobia affected life in the U.S. over two decades." CBS News engaged in similar misdirection with a piece titled "Muslim Americans still face hostility 20 years after 9/11." A CNN story containing no evidence leads viewers anywhere else possible with the headline: "Too many US Muslim children dread 9/11 every year."

Stories of anti-Islamic hate crimes, when they are true, deserve to be told, of course. But the dereliction of duty to complete the more complicated, accurate portrait, in which 9/11's perpetrators acted out of their perceived religious duty, short-circuits the opportunity to explain how that same motivation has survived and thrived around the world under different brand labels, and remains a potent threat.

Fortunately, the 567-page 9/11 Commission Report, the U.S. government's three-year-long, bipartisan investigative effort to provide as full a possible historic account of how the attacks succeeded – and why the perpetrators carried them out – exists for moments like these. The report was authored by the National Commission on Terrorist Attacks Upon the United States. That was an independent, bipartisan group created on Nov. 27, 2002 by an act of Congress signed by President George W. Bush to study and then hold hearings about what happened.

To be sure, the 9/11 Commission report has its detractors who have quibbled with its recommendations, analysis, and research methodology. But the document stands factually unscathed with its gravitas intact. It remains in public libraries, on official government websites, and was quoted widely (if selectively) in the media commemoration coverage. Congress carried many of the report's recommendations through to major legislation. The report is still frequently cited in academic works and books as definitive history of the attacks, along with its conclusions about the motivating ideology behind them, which have never been overturned.

If there was ever a time to let the 2004 government tome do its job, it is now, when media gatekeepers regard essential truths as too politically unsuitable for American minds. The following are excerpts from the 9/11 report about WHY they attacked.

Excerpts to Remember for the Now and Future

What to Do? A Global Strategy, Reflecting on a Generational Challenge, Defining the Threat, page 362.

Bin Ladin's grievance with the United States may have started in reaction to specific U.S. policies but it quickly became far deeper. Al Qaeda's answer was that America should abandon the Middle East, convert to Islam, and end the immorality and godlessness of its society and culture: 'It is saddening to tell you that you are the worst civilization witnessed by the history of mankind.' If the United States did not comply, it would be at war with the Islamic nation, a nation that al Qaeda's leaders said, 'desires death more than you desire life.' Page 51.

The Foundation of the New Terrorism, A Declaration of War, page 47.

The American media does a disservice to the republic in hop-skipping past the religious "why" behind 9/11. In doing so, it fails to serve the time-tested wisdom that those who forget the past are doomed to repeat it. Protecting a new generation of Americans from knowing the why of 9/11 portends another failure to guard against "Islamist terrorism" and a return to fatal pre-9/11 naiveté and vulnerability.

Todd Bensman is a 23-year former investigative newspaper reporter and government intelligence official with master's degrees in journalism and security studies. His new book is America's Covert Border War: The Untold Story of the Nation's Battle to Prevent Jihadist Infiltration.