Pakistan Struggles to Contain the Radicalism It Fostered 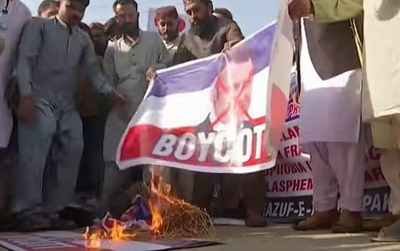 A state that was founded in 1947 on the basis of its majority religion, outbursts and protests for religious causes are a common scene in Pakistan. At one time, the Pakistani government looked the other way or even endorsed the protests. Recent riots that swept the country were a natural outcome.

A new group, Tehreek-e-Labbaik Pakistan (TLP), has taken the mantle of extremist groups in the country. The group, which was founded in 2015, became a driving force in the country. It has used public anger over the controversial cartoons depicting Islam's Prophet Muhammad by the French satirical magazine Charlie Hebdo. When French President Emanuel Macron reiterated his commitment to protecting freedom of speech in his country, TLP pushed waves of violent protests across Pakistan, demanding the expulsion of the French ambassador.

The group's violent activities led Pakistani Prime Minister Imran Khan's cabinet to ban TLP April 15 under the anti-terrorism law. TLP leader Saad Rizvi was arrested on April 12 on charges of inciting violence, before being released after TLP intensified their riots. The move exposed Pakistani authorities' lack of control over the escalating situation.

Khan was a world champion cricketer who led his country to a world championship in 1992. His transformation from a national hero sportsman to an advocate of Islamist policies is peculiar.

Khan gained popularity among some overzealous Pakistanis by waging verbal attacks against France. After the October beheading of French history teacher Samuel Paty, who showed his class Charlie Hebdo's controversial Prophet Muhammad cartoons, French President Emanuel Macron said that Islam was "in crisis" and that Paty "was killed because Islamists want our future."

"This is a time when Pres Macron could have put [a] healing touch & denied space to extremists rather than creating further polarization & marginalization that inevitably leads to radicalization," Khan wrote. "It is unfortunate that he has chosen to encourage Islamophobia by attacking Islam rather than the terrorists who carry out violence, be it Muslims, White Supremacists or Nazi ideologists."

This was not the first time Khan bashed Macron. Consequently, diplomatic relations between the countries deteriorated. France rejected Pakistan's request to upgrade some of its military equipment, including the Mirage jet fighters and some submarines.

After April's riots, France advised its citizens and companies to leave Pakistan temporarily. "Due to the serious threats to French interests in Pakistan, French nationals and French companies are advised to temporarily leave the country," the French Embassy in Pakistan said.

As Israel and Hamas battled last month, Khan supported sanctions against Israel during a call with Turkish President Recep Tayyip Erdogan. Khan is attracting Islamist support by rejecting any recognition of Israel.

And much like Erdogan, Khan has looked the other way concerning the plight of China's Uyghur Muslims in fear of worsening economic ties. "Whatever issues we have with the Chinese, we speak to them behind closed doors," Khan told journalist Jonathan Swan in a recent interview. "China has been one of the greatest friends to us in our most difficult times." He then tried to deflect the question by bringing up the conflict over Kashmir and even minimized the depth of China's abuses.

"This is not the picture that comes from that [Chinese] side."

The Uyghurs are in forced labor camps, undergoing indoctrination in which they "are forced to pledge loyalty to the CCP and renounce Islam," a Council on Foreign Relations report said.

Khan described al-Qaida leader Osama bin Laden as a "martyr" during a November speech before the Pakistani Parliament. "The Americans came to Abbottabad [Pakistan] and killed Osama bin Laden. Martyred him," Khan said.

"Extremism and radicalism is a double edged sword and invariably leads to a more virulent acts of terrorism. [The] Pakistani deep state has unfortunately nurtured the extremists and even proscribed terrorist groups," former Indian Ambassador to Jordan, Libya and Malta Anil Trigunayat told the Investigative Project on Terrorism. "Acts are not dissociated from [the] overall politico-religious complex within the country and do become incendiary and self-defeating in turn."

In a report issued last December, the U.S. Commission on International Religious Freedom (USCIRF) placed Pakistan among six countries "with the highest number of blasphemy cases."

"Although the state has not yet executed a convicted blasphemer, violence against alleged blasphemers may occur at any point—from a rumor of blasphemy, to the accused's arrest, trial, conviction, or even acquittal," the report said. "Violence is not solely directed against the accused, but is often exacted against lawyers, family, and faith-based community members as well. When allegations are made, violent mobs frequently form and demand punishment."

The number of blasphemy cases has increased under Khan's rule.

In the wake of TLP violence, the European Parliament criticized the harsh laws in April. It voted to end trade concessions granted to Pakistan by European countries for failing to heed previous warnings about blasphemy laws as well as systematic and brutal suppression of minorities and media houses and personnel. Khan, in turn, has asked Western countries to criminalize blasphemy.

Despite European Union Parliament outcry against Pakistani blasphemy laws, Imran Khan's government decided in May to uphold the laws. Earlier in April, he called upon Muslim majority countries to reunite against the West and force them to adopt global blasphemy laws to be imposed by the United Nations. This was a pledge he has taken since he was elected in 2018 and long before the recent spat with Macron.

A Pakistani Catholic couple spent more than seven years on death row after being convicted of blasphemy. Shafqat Emmanuel and his wife Shagufta Kausar were accused of sending text messages to a local cleric in English which insulted the Quran and Muhammad. Both are illiterate, however, and cannot speak English.

That fact led a Lahore high court to overturn their convictions earlier this month. While they are free, they remain in fear they could be attacked. After a similar case ended with a similar outcome, Asia Bibi was forced to move to Canada for her safety.

Pakistan sentenced 584 people to death in 2019, 17 of them for blasphemy. Vigilante mobs kill others suspected of blasphemy, including American citizen Tahir Ahmad Nassim. Nassim was on trial last July for claiming to be a prophet, and was shot and killed inside a Peshawar courtroom by a 15-year-old.

Pakistan's tolerance for radicalism has deadly consequences for its neighbors. "India is the second largest Muslim nation in the world and Bangladesh has a large Muslim community where there is a section which can be expected to lead to violent protests and embrace radicalization," said Ambassador Trigunayat.

India has been victimized by Pakistani terrorists, including Laskhar e-Taiba, which orchestrated the deadly 2009 Mumbai attack that killed 166 people.

For decades, Pakistani governments have upped the ante on religious-based restrictions, including blasphemy laws, to appease radical groups. April's violence is the latest indication they can't cope with the increasing levels of religious based radicalism they fostered.