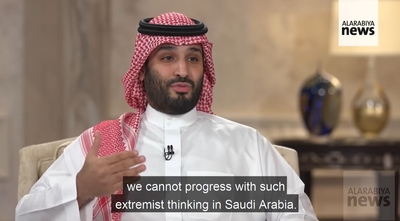 Saudi Arabia has been a main proponent and Islamism and Wahabbism for decades.

But in an April interview broadcast on Saudi-owned Al Arabiya News, Crown Prince Mohamed bin Salman indicated that support may be about to end. Saudi Arabia intends to disregard many of the unverified sayings attributed to Islam's prophet Muhammad that were passed from generation to generation without any verifiable source.

"We should engage in continuous interpretation of Quranic texts," bin Salman said, "and the same goes for the Sunnah of the Prophet PBUH, and all fatwas should be based on the time, place, and mindset in which they are issued."

Saudis should not idolize any scholar, even Mohamed Abdel Wahab, the Muslim theologian and founder of Wahhabism, bin Salman said.

The changes are vital if Saudi Arabia is to remain economically vibrant, he said.

In Islam, the Prophet Muhammad's sayings, known as the hadith, are second in influence only to the Quran. Some hadith are verified and unchallenged. Scholars debate the validity of others. Bin Salman in this interview became the first Saudi official to acknowledge that.

This change could open the door to Saudi Arabia nullifying a majority of the hadiths on which many Islamists base their doctrine.

"When we commit ourselves to following a certain school or scholar, this means we are deifying human beings," bin Salman said.

The comments mark a stunning shift for Saudi Arabia, since Wahhabism has been a main component of its constitution and politics since its 1932 founding. Wahhabis remain a main challenge to the ruling House of al-Saud and have organized attempts to overthrow it, including the 1979 seizure of the grand mosque of Mecca.

Bin Salman's interview has had ripple effects. In Egypt, the grand imam of Al Azhar, the most prominent Sunni institution in the world, said that the hadith enjoyed too much emphasis.

"Calling to sanctify the jurisprudential heritage, and equating it with the Sharia leads to the rigidity of contemporary Islamic jurisprudence," said Ahmed al-Tayyib. For example, fatwas prohibiting interest on loans remain popular among Islamists based on old interpretations. But an Al Azhar fatwa stipulated that regular banking is permissible.

Other modern day-to-day activities fatwas are issued because of the confusion caused by adhering literally to old texts. Fatwas causing misogyny in Islamic societies based on unverified and weak hadiths, such as the false hadith, "A people who make a woman their ruler will never be successful," are being debunked with historical examples.

The Prophet's wife, Aisha, led the Muslim armies in the battle of Al-Gamal, wrote Syrian Islamic thinker Ahmed Al-Romh. Also, Egypt was briefly ruled in 1259 by Sultana Shajra al -Durr following the death of her husband, the last Ayyubid Sultan of Egypt.

Moreover, terrorist groups have used a statement attributed to Muhammad as inspiration. It says Muhammad was "ordered (by Allah) to fight against the people until they testify that none has the right to be worshipped but Allah and that Muhammad is Allah's apostle."

But scholars have determined that that hadith isn't valid, wrote Moroccan Islamic thinker Mohamed ibn Al-Azrak. It "contradicts reason and sound logic ... if they call us to fight the world and sever ties with the peoples of the world."

But now some of those investments are seen as liabilities. The kingdom started reversing that policy and gave up control of some mosque and Islamic centers in the West, such as a Brussels mosque in 2018, which it had leased since 1969. The kingdom's aim was to change its reputation as main supporter of ultra-conservative Islam.

Muslim majority countries which had more tolerant and secular traditions, such as Indonesia, witnessed increasing levels of radicalism with the spread of Wahhabism.

Indonesia, with 270 million people, has the largest Muslim population in the world. More women there are wearing the niqab, thanks to Wahhabi interpretations of unverified hadiths, and not a direct instruction in the Quran. "The women who wear a niqab must never say she is wearing it because it is required by (Islamic) Sharia," Al Azhar's al-Tayyib said in 2017. "It is like wearing or taking off a ring."

In 2016, 500,000 Islamist protestors, organized by the Islamic Defenders Front (FPI) in Jakarta, accused the Christian governor of Indonesia's capital of blasphemy against Islam.

"The accusation came after Basuki Tjahaja Purnama referred to a Quranic verse while campaigning. He argued that some Islamists were using the verse to discourage Muslims from voting for a non-Muslim. But he was accused of insulting the Quran and Muslims. Purnama was sentenced to two years in prison in April 2020.

In 2016, bin Salman announced Vision 2030, a blueprint for transforming Saudi Arabia into an industrial powerhouse. He wants expanded investment in tourism to be a key part of that vision. Tourism, mostly to religious sites, contributes $26.8 billion annually to the national GDP.

Meanwhile, the country is loosening its cultural grip. Movie theaters reopened after a 35-year ban imposed by King Fahd. Moreover, bin Salman told CBS in 2018 that women would no longer compelled by law to wear the hijab or niqab. "The decision is entirely left for women to decide what type of decent and respectful attire she chooses to wear," said bin Salman.

The Riyadh High Court in 2018 waived the requirement for women to wear full veil and restricted it to wearing a hijab. Following bin Salman's decision, women were seen in public walking around without any headwear.

Moreover, ancient archaeological sites, such as the Nabatean city ruins of Hegra, which were neglected for decades, were reopened for the public. Driving for women was permitted in 2017 by a royal decree.

That said, Saudi Arabia's human rights record is still criticized by a number of NGOs, such as Human Rights Watch. The country still represses dissidents, human rights activists, and independent clerics. These issues tarnish any reforms that the crown prince is undertaking.

It could be years before these religious and social reforms take root in full Saudi society. But if bin Salman's pledge to back away from Wahhabism takes root, radical Islamists have lost a key component used to spread their ideology.